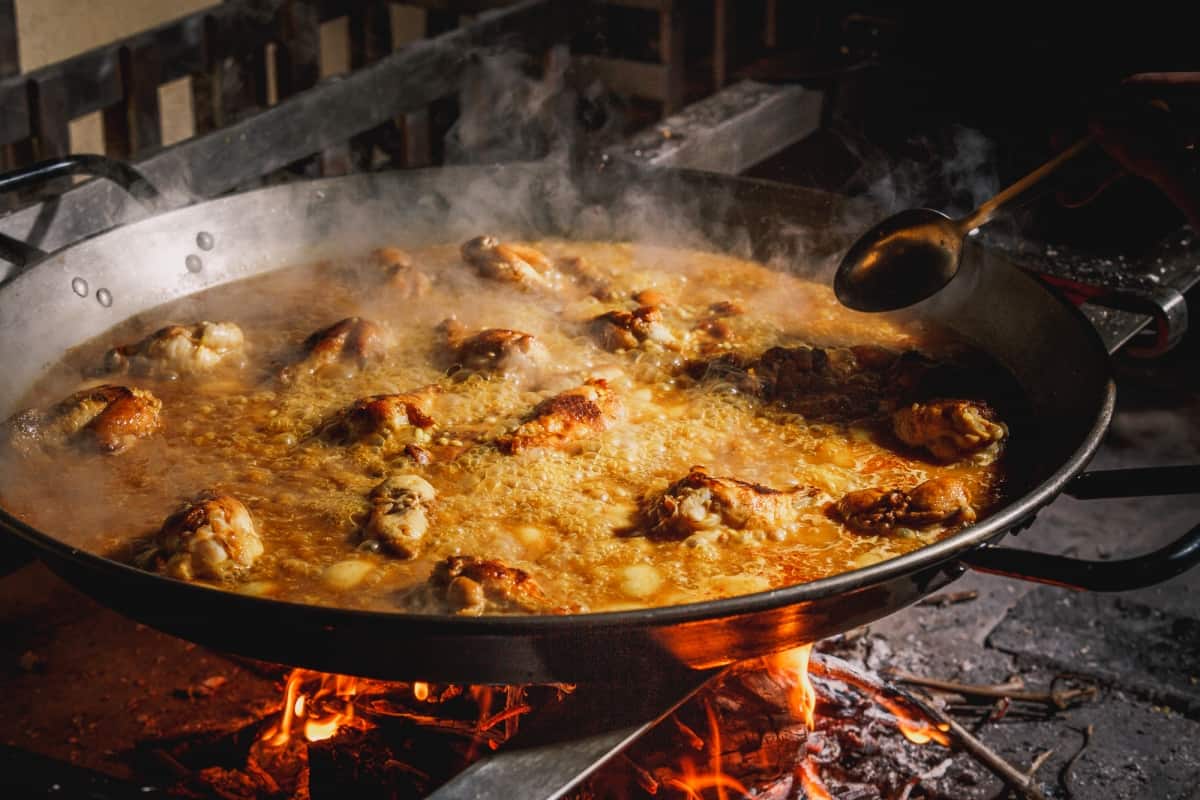 Considering the fact that Spain is the most popular holiday destination amongst Brits, it’s surprising that the country’s national cuisine is so under-represented in London restaurants. Granted, the city does have a clutch of often exceptional Spanish restaurants (Barrafina, Morito, José, etc.), but they’re generally far and few, especially so when compared with the quantity of establishments championing the food of France and Italy. The first international restaurant from Valencian chef Quique Dacosta, Arros QD isn’t a Spanish restaurant, per se – it’s billed more broadly as a Mediterranean restaurant, as a waiter explains – but the kitchen has a particular flair for paella.

On the corner of Eastcastle Street and Wells Street, Arros QD occupies a large, 140-cover space set across two floors. A sophisticated restaurant aided by a £4.3 million investment, Arros QD’s main ground-floor dining room is festooned with expensive furnishings in warm, fire-inspired orange, brown and gold tones, while an open kitchen adds a touch of theatre to the dining experience, showcasing the eight-meter flame grill over which the kitchen’s rice dishes are cooked, using a variety of timbers to complement each specific dish. There’s also an immersive chef’s paella counter and chef’s table. Service is expectedly polished but notably warm, and the space is atmospheric during dinner.

As for the menu served, it’s perhaps unsurprising that rice features so prominently at a restaurant with the Catalan word for the ingredient in its title. Having become renowned for his avant-garde cooking over the past 30 years, Quique Dacosta has opened a string of restaurants with a galaxy of Michelin stars (his eponymous restaurant in Denia has three stars) and has also published Arroces Contemporáneos in 2005, a book and treaty about rice.At the chef’s first London restaurant, paella – the Valencian peasant dish – features heavily, also joined by some contemporary rice dishes. These include the likes of ‘smoke ‘dashi’ eel, katsuobushi, white sesame seeds, black garlic aioli’; or ‘wood pigeon breast, wild mushrooms, rosemary, porcini aioli’. To drink, a wine list boasts around 230 bottles, paying particular attention to the wines produced around the Mediterranean Sea, focussing on organic farms.

A recent dinner began with a dish of “cheese stones” (£1.50 each) also served at the chef’s Denia restaurant. A dish with molecular gastronomy roots, the “stones” feature a graphite cocoa butter shell encasing Manchego and Parmesan cream, boasting impressive kitchen skill but served fridge cold and thus bland, like high-end Babybels. More flummery comes with a dish of Sardinian cherry tomatoes with a sundried tomato emulsion, capped with a blizzard of tomato “snow” (£14). The quality of the tomatoes is unmistakeable and the emulsion is bold with umami savours. The “snow”, however, demands to be admired – produced from liquid given off when dehydrated – but lacks seasoning and enough flavourto warrant its place on the plate without masquerading as an archetype of style-over-substance. Far more enjoyable are the menu’s comparatively rustic dishes such as the soft-shell crab with it’s deftly fried carapace (£14), plus the famous paella.

Named after the pan it’s cooked in, paella has become one of Spain’s most internationally recognised dishes, synonymous with Valencia. Here, bomba rice is used and cooked with military precision, with a handful of differing varieties available. Embellished with a smattering of cuttlefish, tiger prawn and dominoes of monkfish flesh, the ‘Mediterranean’ is relatively pricey at £50. Ideally I’d like more fish, but the exemplary cooking of the rice compensates, with the shallow cooking pan allowing the rice to spread evenly and absorb the stock its cooked in, eventually caramelising and forming a glorious socarrat crust, joined by a garlic-rich aioli. Arguably the best paella I’ve eaten in the UK.

To finish, dessert showcases more of the chef’s Michelin-feted cookery. The ‘giant cookie’ (£11) is showered with macadamia nuts and demands to be smashed to unveil the underlying vanilla ice cream and decadent Araguani chocolate. A dessert featuring roast pumpkin foam (£11), on the other hand, is absolutely inspired; striking a remarkable balance between the vegetable’s savoury and sweet notes, finished with caramelised pumpkin seeds.

One of the many new restaurants from revered European chefs to have opened in London over the past five years, Arros QD has plenty of promise. Not all dishes are winners, but the service and atmosphere are both charming, and the superlative paella alone makes the restaurant worth visiting.