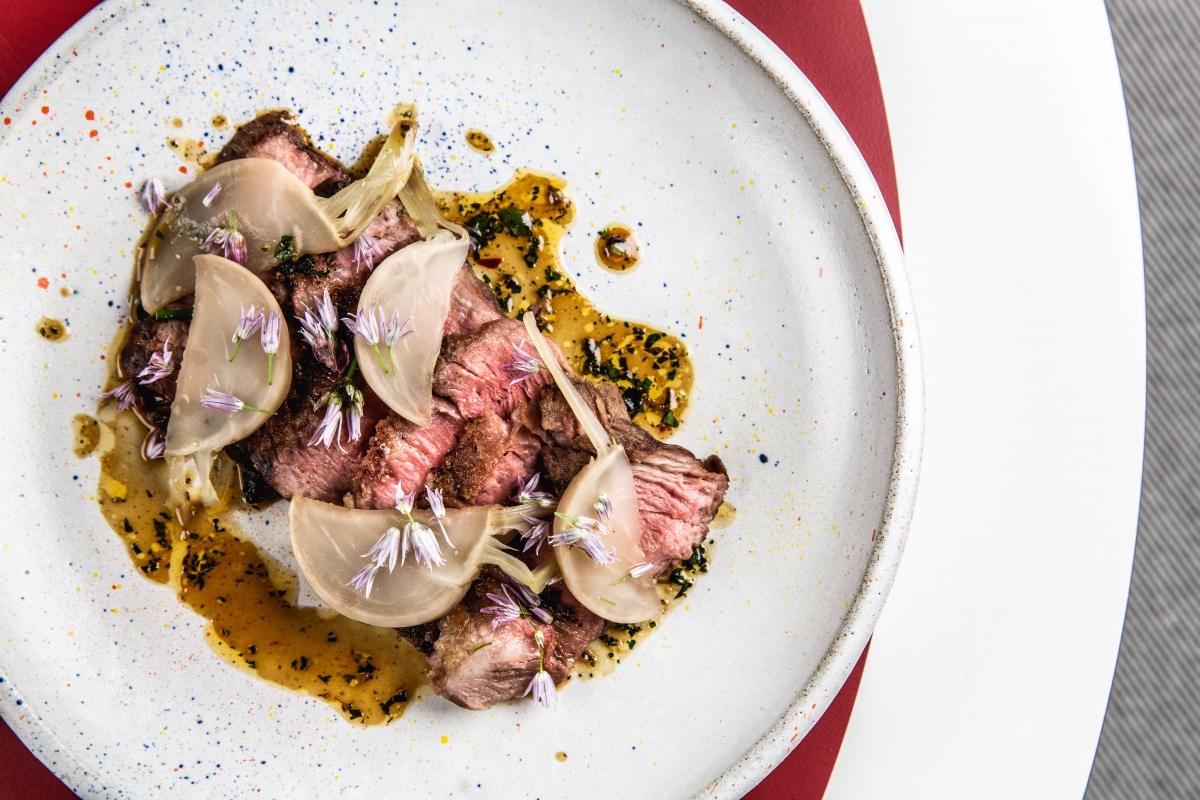 Isla at The Standard | Photo: @charliemckay

Isla and Double Standard at The Standard – King’s Cross

The first London opening from US hotel Group, Standard International, The Standard will launch in King’s Cross this summer. This month will see the opening of two ground-floor drinking and dining destinations within the 10-storey hotel – Isla and Double Standard. Overseen by YBF Chef of the Year-awarded Adam Rawson, both spaces will have distinct identities with separate menus and design created by long-standing Standard collaborator Shawn Hausman.

An all-day restaurant with an elegant dining room, Isla will serve a seasonal menu and focus predominantly on low intervention wine, serving coastal cuisine inspired by Britain’s island geography. Double Standard, on the other hand, will be a more boisterous space, with a menu inspired by traditional pub classics and NYC dive bar food, also serving craft beers and classic cocktails late into the evening. An additional stand-alone bar and restaurant from chef Peter Sanchez-Iglesias will also open in the hotel later this year.

On the launch of Isla and Double Standard, Adam Rawson said: “I’ve really enjoyed the challenge of creating menus which reflect the distinct personalities of Double Standard and Isla. Double Standard is going to be a more raucous, convivial space, so I’ve come up with a selection of elevated snacks perfect for sharing (or soaking up a few pints). Isla’s menu will be more delicate and much lighter – perfect for enjoying in the summer sunshine.”

Isla and Double Standard will open on Thursday 11th July and can be found at The Standard London, 10 Argyle Street, London, WC1H 8EG.

A new 42-storey skyscraper in Queen Elizabeth Olympic Park, The Stratford Hotel offers a mix of short and long-term stays, with three sky gardens, a private club and two restaurants – Allegra and The Stratford Brasserie. Opening this month, The Stratford Brasserie will act as an all-day dining restaurant. Under the direction of chef Ben Harrington (Soho House Group, Gordon Ramsay at Claridge’s), The Stratford Brasserie’s menu will focus on light sharing dishes using seasonal British ingredients. Breakfast will include the likes of homemade crumpets and Acai bowls, followed by pizza served all day alongside salads and small plates. Dinner will include classic brasserie fare such as schnitzel, risotto and burgers alongside chopped Cornish bream with smoked crème fraîche, pickled celery and rye; or preserved lemon and oregano roasted chicken. A grilled peach Baked Alaska will be available amongst the dessert offering.

The Stratford Brasserie is set to open in July and can be found at Olympic Park, 20-22 International Way, London, E20 1GQ.

The latest from Saiphin and Alex Moore, the husband and wife team behind Rosa’s Thai Café, Hoh Sek Noodles will open at St. Katharine Docks Marina this month. Cantonese for ‘delicious’, Hoh Sek will have a prominent focus on Chinese-influenced noodles, inspired by Saiphin Moore’s time spent living in Hong Kong. During the say, a grab-and-go noodle concept will operate from the site, before transforming into a 40-cover sit-down restaurant during the evening.

On the launch of Hoh Sek, Saiphin Moore said, “Noodles have always held a special place in my heart as it was my first noodle shop, which I set up when I was 14 in Thailand, that first started me on my career as a chef. Years later, Alex and I met in Hong Kong and we fell in love with the street food noodles there. You can buy great and tasty noodles from almost every street stall and they’re also served in the more traditional restaurants. They’re a real symbol of the city’s thriving food scene, so this is what we now want to bring to London and share with everybody.

“Alex and I live close to St. Katharine Docks, and this is where the idea for Rosa’s Thai Cafe was born when we first moved to London, so seems fitting we are returning here to launch Hoh Sek in our own neighbourhood this July. We hope everybody will fall in love with amazing noodles like we have.”

Hoh Sek is set to open in July and can be found at The Roundhouse with the Green Roof, St. Katharine’s Way, St. Katharine Docks, London, E1W 1TW.

Mourad Mazouz, the creative mind behind Sketch London and recently re-launched Momo will open Mo Diner this month. Inspired by the classic American diners of the 1930s, the Heddon Street restaurant’s interiors have been designed by Mazouz, having collaborated with a number of high-profile collaborators. As for the food, the restaurant’s menu will be inspired by the shores of the Mediterranean, served from breakfast through to dinner.

At breakfast, Mo Diner will serve Mediterranean twists on classics, including Mo hash browns with pomegranate and brown sauce to Berber pancakes with fig marmalade and almonds. A variety of classic egg dishes such as Moroccan khlea with beef, eggs and green chermoula; and Eggs Florentine with spinach, mulukhiyah and aleppo hollandaise will also be available. Elsewhere, dishes will include the likes of ‘Loulou’s chicken wings’; Merguez in a blanket; grilled octopus with saffron aioli; and Om Ali bread pudding for dessert. In addition, a list of carefully selected wines by the glass and carafe will also be available alongside healthy smoothies, milkshakes and hard shakes.

Mo Diner is set to open in July and can be found at 23 Heddon Street, London, W1B 4BH.

A new 24-hour member’s club off Park Lane, 24 Mayfair will occupy an elegant site split into a ground floor bar and upstairs restaurant. Serving a light daytime menu, the bar will evolve into an upbeat, contemporary cocktail bar in the evening, serving a selection of cocktails including the likes of ‘Pink in Bloom’ (comprising hibiscus and acai infused gin, quince liqueur, homemade tonic and an edible bouquet) or an opulent ‘Gold Martini’ made with 24k gold-leaf, Grey Goose vodka, elderflower and Sauternes.

24 Mayfair is set to open in July and can be found at 24 Hertford Street, London, W1J 7SA.

Following the success of Lyle’s, currently number 33 in the World’s 50 Best Restaurants list, James Lowe and John Ogier will open Flor next week. A new wine bar, bakery and restaurant in Borough Market, Flor will be heavily inspired by the buvettes of Paris and the pintxos bars of San Sebastián. Each morning, a selection of baked goods will be served, while lunch will aim to encapsulate the informality of European dining culture, with dishes such as cured Mangalitsa and Comté sandwich in fermented potato bread; or raw scallop, preserved gooseberry and green tomato.

Dinner, on the other hand, will feature a menu of simple plates such as burrata with grilled bread and salted tomatoes; Cornish pollack brandade and pickled peppers; lamb ribs, yoghurt and black lime; and whole Dover sole with capers and wild marjoram. To finish, individual chocolate sabayon tarts will be available alongside loganberry fool and simple desserts made with fruit picked from the Sussex farm used by Lyle’s. Flor will also serve a wine list sourced from agriculturally responsible producers and will be open for brunch on Saturdays.

On the launch of Flor, John Ogier said: “We have decided to open a bakery, restaurant and wine bar that we like to think of as the little sister of Lyle’s, following the same philosophy with a love of good quality ingredients but with baking at the heart.”

James Lowe added: “Whereas at Lyle’s we focus on the best produce that Britain has to offer, with Flor we will be paying homage to the variety of European ingredients available in London, particularly with Borough Market on our doorstep. It will be a smaller, more laid-back space but with a big personality.”

Flor is set to open on Thursday 11th July and can be found at 1 Bedale Street, London, SE1 9AL.