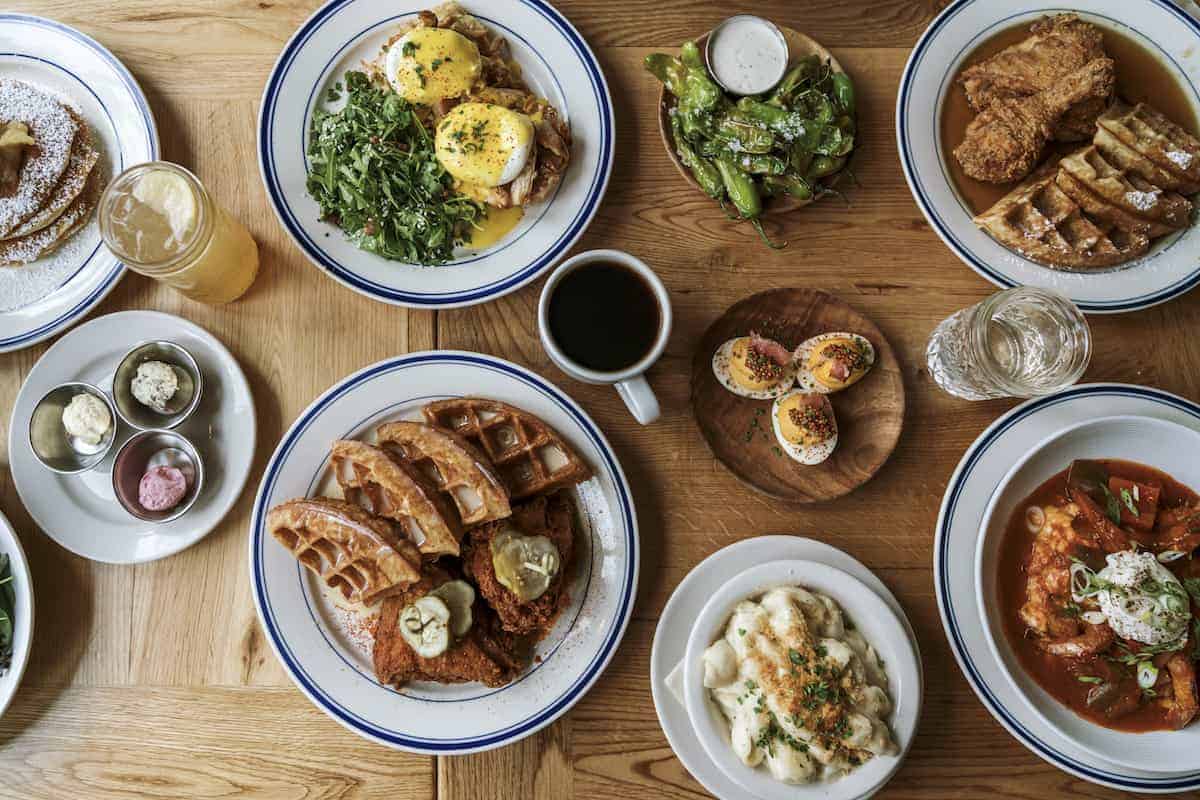 Backed by Nas, cult US chicken and waffle restaurant, Sweet Chick, will open its first London restaurant this month. Founded in Brooklyn in 2013, by restaurateur John Seymour, Sweet Chick currently serves its take on modern American comfort food across five locations in New York and Los Angeles. Taking over a site near Oxford Circus, the new restaurant will mark the brand’s first international venture. In London, Sweet Chick will serve all of the fried chicken (brined overnight in a sweet tea-stained brine) and waffles featured throughout the US sites. Also joining the new menu will be Southern-inspired classics such as ‘Biscuits & Gravy’, ‘Shrimp & Grits’ and ‘Mac n Cheese’. These will each be available alongside new specials inspired by Sweet Chick’s new home, and a drinks list including signature cocktails and local beers from London Fields Brewery.

On the London Launch of Sweet Chick, Founder John Seymour said: “I can’t wait to bring the Sweet Chick community to the UK. The food scene is massive in London, but we hope we can offer something fresh with our take on southern inspired staples and the best fried chicken and waffles this side of the Atlantic.”

Sweet Chick is set to open on Thursday 26th September and can be found at 8 Market Place, London, W1W 8AG.

A new restaurant from Jason Atherton, The Betterment will open at The Biltmore, Mayfair, across the square from Gordon Ramsay’s new Lucky Cat (formerly home to Maze, where Atherton rose to prominence).

A collaboration between Atherton’s The Social Company and LXR Hotels & Resorts, The Betterment will occupy The Biltmore hotel, following a £60 million redevelopment to become Europe’s first property within the LXR Hotels & Resorts collection. Alongside the restaurant, Jason Atherton will also run The Terrace, The Tea Lounge and The Pine Bar. At the new restaurant, Head Chef Paul Walsh (who launched and led Atherton’s City Social for five years, achieving the restaurant’s Michelin-starred status within seven months of opening) will serve a seasonally driven menu. The exact launch menu is yet to be unveiled, but guests can expect the likes of wood-fired fish and meats, fresh seafood, signature salads and inventive side dishes, with a rustic open grill at the heart of the restaurant.

On the launch of The Betterment, Jason Atherton said: “To be working on the launch of The Betterment at The Biltmore, Mayfair is incredibly exciting. When we were approached by Mr Kwek, Chairman of Millennium & Copthorne Hotels plc, owner of The Biltmore, Mayfair, we just knew it was an opportunity we couldn’t let pass. We chose the name The Betterment to encapsulate our journey from opening Pollen Street Social in 2011 to today, highlighting the progression of our food, ethos and way of thinking. To be returning to Mayfair’s Grosvenor Square after nine years is very special to me, and I’m thrilled to be doing it alongside world class chef and friend, Paul Walsh.”

The Betterment will open on Thursday 19th September and can be found at 44 Grosvenor Square, London, W1K 2HP.

Inspired by founder Victoria Paltina’s visits to Tel Aviv, HAYA will open in Notting Hill. An all-day Mediterranean restaurant, HAYA will focus on simple sharing plates and nutritious, seasonal ingredients. Open early, breakfast dishes will include the likes of yoghurt with granola and honeycomb, or goat’s cheese and egg white omelette, available alongside cold-pressed juices and freshly-ground coffee. At lunch, Head Chef Oren King’s Tel Aviv background will be celebrated with dishes such as burrata with loquat compote and citrus vinaigrette; quinoa salad with crumbled feta and pomegranate; and spiced lamb cutlets with honey yoghurt.

A selection of seasonally-changing small plates will be served at dinner, set to include the likes of zaatar duck breast with freekeh risotto; crispy prawns with spicy yoghurt and harissa; and seared tuna, dukkah and homemade labneh. During the weekend, HAYA will open for brunch and include dishes such as shakshuka or fried polenta cakes with shaved parmesan and fried quail eggs. As for the drinks offering, the restaurant’s wine list will be short but considered, championing Israel’s five wine-making regions, some Old World bottles and a handful of organic wines.

On the launch of HAYA Founder Victoria Paltina said: “HAYA means a lot to me – this is my middle name and is translated as ‘life’ in Hebrew. The word encompasses everything that I envision the restaurant to be: lively, social and familiar. Having family spread all around the world allowed me to live and grow up between cities including Moscow, New York, London and Tel Aviv, so HAYA takes inspiration from all of them and represents the best of each.”

HAYA is set to open in September and can be found at 184A Kensington Park Road, London, W11 2ES.

Named after their children, Sons + Daughters is a fresh take on a classic sandwich shop from James Ramsden and Sam Herlihy – the duo behind Pidgin. Opening in Coal Drops Yard, Sons + Daughters will serve freshly made sandwiches and sides, soft serve ice cream and a selection of cocktails by World of Zing. Here, the kitchen will be headed up by Jacqueline Barbosa – previously of the Guinea Grill and Where the Pancakes Are – with particular attention paid to suppliers including Paul Rhodes Bakery, Swaledale, and Growing Underground, a sustainable underground farm which grows fresh micro greens and salad leaves 33 metres below the busy streets of Clapham.

Open all day, Sons + Daughters’ lunch and dinner menu will feature six sandwiches, including the ‘CHICKEN S+DWICH’ with Swaledale chicken, pickled cucumber, miso mayonnaise, green sauce, soy-cured parmesan, gem lettuce and wasabi cress, served on white bloomer; and the ‘MORTADELLA S+DWICH’ with Mortadella, taleggio, smoked Isle of Wight tomato, rocket, Thai basil and cider vinaigrette, served on focaccia. Sides will include the S+D air fries, with Sriracha salt and the S+D pickle plate, plus a selection of salads. For dessert, soft serve ice cream will showcase unusual flavours such as candied focaccia and rosemary, or peanut butter and jelly. A bar menu will be available in the evening, featuring drinks and accomplished bar snacks.

Moreover, breakfast will also be served from 8am, include the ‘Breakfast Muffin’, featuring a toasted English muffin with creamed Burford Brown eggs, S+D breakfast spice, smoked tomato and American cheese; and the ‘Vegan Breakfast Muffin’ with a spiced corn fritter, roasted tomato, pumpkin seeds and herbs.

Sons + Daughters is set to open on Monday 9th September and can be found at The Pavilion, Lower Stable Street, Coal Drops Yard, London, N1C 4DQ.

The debut restaurant from Marc Summers (previously General Manager at Berber & Q), Bubala has existed in pop-up form for the past year, hosting sell-out supper clubs at various London locations. At the new restaurant, Summers will lead front of house and operations, joined by Head Chef Helen Graham (The Palomar, The Barbary, The Good Egg).

Designed for sharing and centred around the bold flavours, herbs and spices synonymous with the Middle East, Bubala’s menu will be entirely vegetarian. Vegetables will be given a lick of flame on an open grill and served with traditional, and more unusual, flavour combinations. Highlights from the new menu will include the likes of fried aubergine with zhoug and date syrup; cabbage braised in pomegranate with zaatar chimichurri; and confit potato latkes served with garlicky toum. The drinks menu will comprise a short cocktail menu, red and white house wines on tap, and a selection of wines from Lebanon and the Middle East.

On the opening of Bubala, Founder Marc Summers said: “We are so excited to have finally found the perfect home for Bubala. I feel like there is such appetite for Middle Eastern food in London; the flavour combinations and gentle spicing techniques are perfect to showcase vegetables and vegetarian cooking, and the sharing menu will be a great way for friends and family to come together over food, which is exactly the kind of place we want to be.”

Bubala is set to open on Thursday 12th September and can be found at 65 Commercial Street, London, E1 6BD.

Five years since first launching in Clapton, Yard Sale Pizza will open its fifth shop on Hackney Road this month. Marking the brand’s biggest opening to date, the new restaurant will occupy a two-floor space, with its new delivery area reaching into Bethnal Green, Shoreditch, Hoxton and London Fields. Not available on any third-party delivery apps, Yard Sale operate their own in-house delivery service to ensure the highest quality locally delivered pizza.

Yard Sale Pizza, Hackney Road is set to open in September and can be found at 184 Hackney Road, London, E2 7QL.