Freelance journalist Doug Bierend guides readers through the weird, wonderful world of fungi and the mycological movement in his new book, ‘In Search of Mycotopia’. 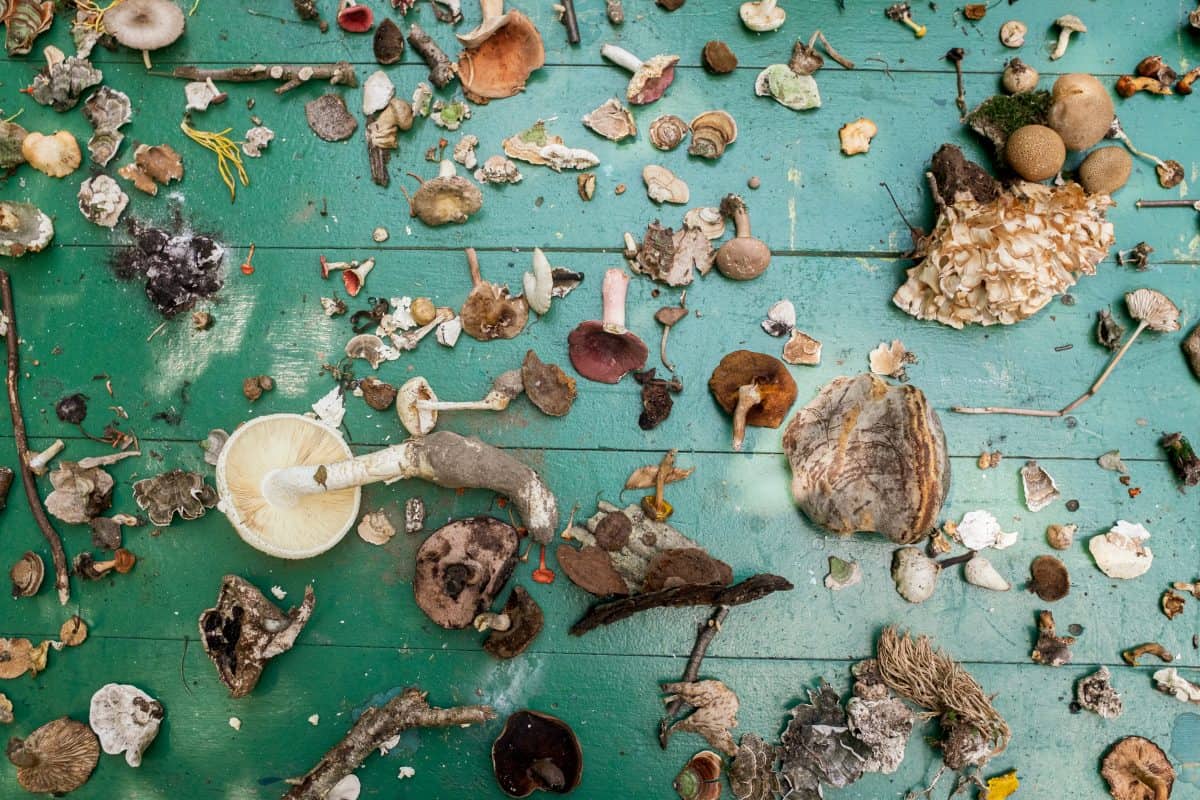 Some of the mushrooms discovered by attendants of MycoFest in the summer of 2019 , near Harrisburg, PA. | Photo by Doug Bierend

A new book from freelance journalist Doug Bierend, ‘In Search of Mycotopia’ guides readers through the weird, wonderful world of fungi and the mycological movement.

From ecology to fermentation, in pop culture and in medicine, mushrooms are everywhere. ‘In Search of Mycotopia’ introduces readers to an oft-overlooked kingdom of life – fungi – and the potential it holds for the future, through work and research being carried out by a community of citizen scientists and microbe devotees. Throughout the book, Bierend also uncovers a vanguard of mycologists; growers, independent researchers, ecologists, entrepreneurs, and amateur enthusiasts exploring and advocating for fungi’s capacity to improve and heal. From decontaminating landscapes and waterways to achieving food security, In Search of Mycotopia demonstrates how humans can work with fungi to better live with nature—and with one another.

The following is an excerpt from ‘In Search of Mycotopia’ (Chelsea Green Publishing, April 2021) by Doug Bierend and is reprinted with permission from the publisher.

‘Among Us‘, from In Search of Mycotopia

Earth teems with fungi. Throughout forests, jungles, grasslands, and deserts; in puddles, at lakeshores, and on the ocean floor; between cracks in stone and on the peaks of mountains; in all climates and on every continent. Fungi can be found as easily during a walk in rain-soaked woods as in the produce aisle, or simply by jabbing a finger into healthy soil. They are essential and ubiquitous. Turn over a rock, dig under the roots of a tree, scoop up a handful of water, open your mouth: there be the fungi. Stop reading for a moment and take a deep breath—you’ve just inhaled their spores.

Whether we know it or not, our daily life is rife with fungal encounters: in the beer and wine we drink; the bread, cheese, yogurt, tempeh, and soy sauce we eat; thousands of the medicines and chemicals on which we rely; and the fuzzy splotches that turn our tomatoes to mush.1 But more than providing conveniences, inconveniences, or culinary experiences, in a meaningful, even literal sense, quietly and largely unseen, fungi bind the living world together. Their exquisitely fine fibers aerate soils, enhancing water retention and bracing against erosion.2 Meanwhile, fungi churn endlessly underfoot, mobilizing the makings of new life. They are called primary decomposers because they’re often first in line to dine on dead or dying trees, leaf litter, and other organic detritus, unlocking nutrients and kicking off the chains of succession that power our planet’s ecosystems.3 Mycological innovator Tradd Cotter uses the term molecular keys to describe their ability to unlock a wide range of chemical bonds, such as those that constitute plants, bugs, bacteria, and anything else that lands on a mushroom’s menu.4 In these capacities, fungi connect all living things in essential relational webs; without them, entire ecosystems would collapse.

And yet, while fundamental, fungi are not at the center of things; rather, they exemplify the interconnectedness and interdependence of all life. Our own health relies on dizzyingly diverse communities of microscopic organisms, in what we have come to call our micro- and mycobiomes. Scientists have found that only 43 percent of the cells that make up our corporeal form are actually human; the majority of what counts as “us” comprises bacteria, fungi, and other microbes.5 For every human gene in our bodies, there are 360 microbial genes.6 It’s enough to inspire an identity crisis.7 As professor Ruth Ley, director of Microbiome Science at the Max Planck Institute for Developmental Biology, put it, “Your body isn’t just you.”8

Even as microbes have gained prominence in science’s view of the world, fungi have remained marginal figures. Fungi were regarded as a funky subset of plants until the latter half of the twentieth century; not until 1969 were they formally recognized as a completely distinct kingdom of life, on par with any other—animals, plants, bacteria—in terms of their scale, variety, and ecological importance. The point is often made that animals, amoeba, and fungi are more closely related to one another than to plants, which may explain something of why they can seem at once strange and uncannily familiar. Many do look like something squarely between animal and vegetable, with an ostensibly rootlike structure underground and mushrooms above that are often described as “fleshy.” Some even protect themselves with melanin; leave a shiitake mushroom out in the sun for a while, and its flesh will surge with vitamin D.9

The oldest confirmed fungal fossil is dated at about 800 million years old,10 though it’s possible that fungi—and if not fungi, then something quite similar—were found in fossils from 2.4 billion years ago.11 Regardless, most current views of the evolutionary tree show animals separating from fungi at around a billion years ago.12 That’s around the time when life on earth was still confined to the oceans, and indeed, fungi were at the fore in the move to shore, intimately tied up with the lives of the earliest land plants, in symbiotic relationships that persist to this day.13 Fossils in Quebec and elsewhere paint the picture of a 400-million-year-old world in which the largest things living on land were the prototaxites, twenty-five-foot-tall spires of what appear to have been a kind of lichen—themselves entanglements of fungi and photosynthesizing algae—that loomed over Ordovician landscapes like blind watchtowers.14

Nowadays, plants are the biomass heavyweights of the world, but fungi remain deeply enmeshed with them and their environments, moving nutrients and transmitting chemical information, a sort of circulatory and nervous system in one.15As old hands at symbiosis, fungi form networks in a literal sense, as weblike beings below the soil and inside other organisms, and also in a relational sense, serving as interfaces among organisms. All species of plants have been found to harbor what are called endophytic fungi, which live as hidden threads woven in and among their cells—in the roots, stems, leaves, flowers, fruits—serving to metabolize nutrients or dissuade foraging, essentially acting as adopted organs to their host, and vice versa.16 Meanwhile, the vast majority of plants—some 92 percent of known species—extend their roots’ reach thanks to intimate entanglement with mycorrhizae. Literally “root fungi,” mycorrhizae solubilize minerals from the soil in exchange for plant sugars produced by photosynthesis.17

Yet despite fungi’s ubiquity and importance, many people lack even a fundamental understanding of what they are or how they live. As mammals we can’t help but have an intuitive sense for what animals are and what’s required for our survival: water, food, oxygen, temperatures within certain ranges. Even without any botanical background, many will be familiar with the basics of plants: they soak up water and minerals from the soil through roots, convert sunlight into energy through photosynthesis, “breathe” in carbon dioxide, “exhale” oxygen, and cast cooling shade. These are the barest basics, but it’s more than many people know about fungi. Ask someone what a fungus eats and perhaps they’ll guess manure, or rotting fruit, or houses, each of which counts as a correct answer. Considering what a vast variety of things fungi consume, though, or can consume, it’s difficult to guess wrong; cigarette butts and cicada butts would be equally correct guesses. But ask a stranger how fungi eat, and it’s a good bet you’ll stump them. (Stumps, by the way, are also fixtures of the fungal diet.)

The average person can be forgiven for a lack of fungal literacy. After centuries preoccupied with plants and animals, the institutions of natural science have been slow to prioritize fungi, and few of us receive even a basic education in their biology or ecology. Nevertheless, a great deal is now known, thanks largely to the efforts of passionate mycologists both inside and outside those institutions. Yet many details of fungal biology, their evolutionary history, and their ecological roles in soils, among plants, and in human culture remain cloaked in mystery. For the curious, it offers a lifetime of inquiry and many opportunities to contribute to our understanding of a vital dimension of nature. Luckily for the nonscientists among us, it doesn’t require a biology degree to learn about, or from, fungi.