An Irish whiskey aged in ex-bourbon casks, then finished in dark rum casks from Barbados. 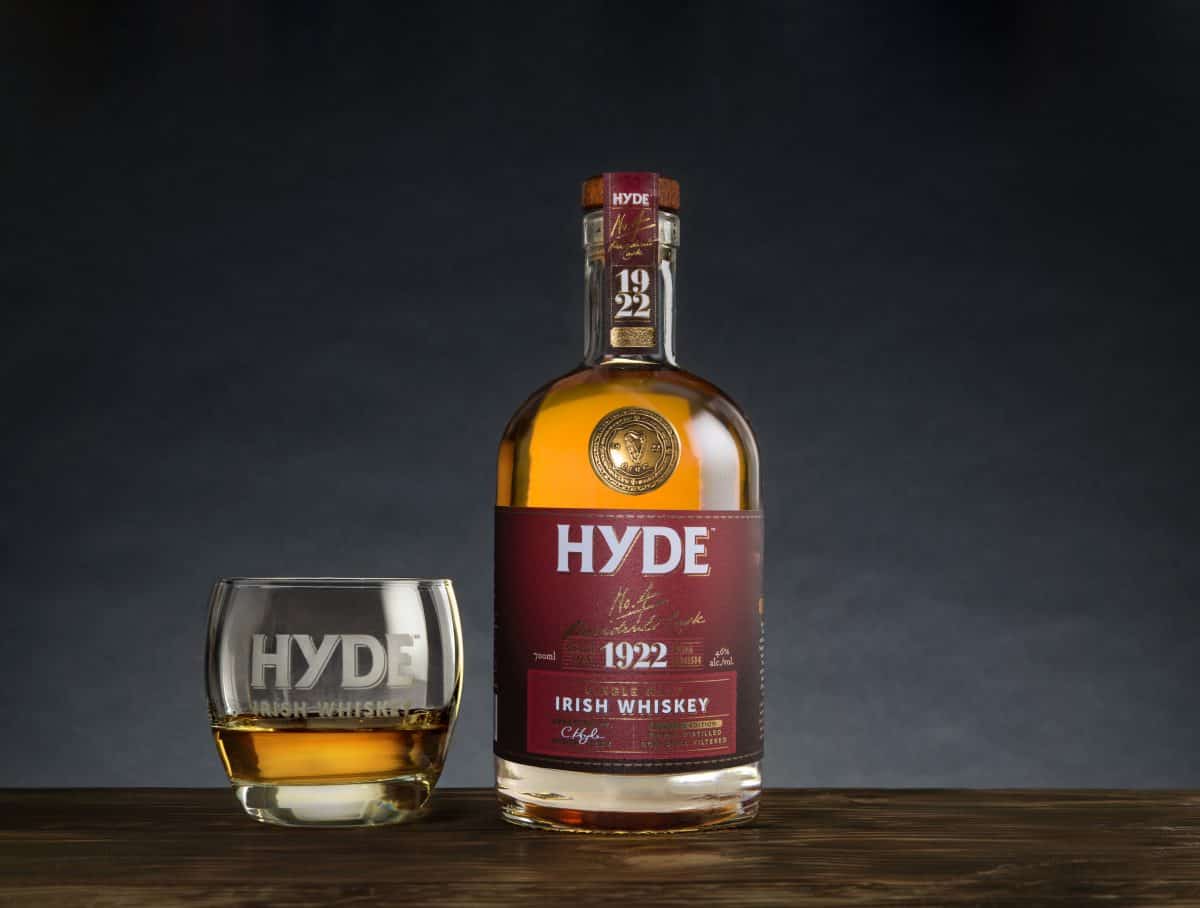 With 380 years of family drinks history and knowledge, HYDE Whiskey has launched in the UK. The Hyde family have been involved in Irish Whiskey since 1640, when they owned a well-known pub at “Tinker’s Cross” in West Cork from 1640 until 1962. It was here that they became whiskey bonders, which the family are proud to focus on, rather than distilling.

Instead of distilling, HYDE focuses on the age-old craft of bonding, with emphasis on the art of wood management and cask maturation. 80 per cent of the final whiskey taste is as a direct result of the interaction between the maturing ‘new make’ whiskey and the wooden cask in which it is aged. Therefore, selecting the correct barrels is an important job, personally overseen by owner Conor Hyde, who also oversees every distillation batch to ensure all of HYDE’s Irish whiskey is made to the highest standard, using 100 per cent Irish malted grain. In order to be called an ‘Irish Whiskey’, the spirit must be distilled and matured in Ireland, in wooden barrels for at least three years, with a minimum of 40 per cent ABV. HYDE’s whiskeys are all bottled at 46 per cent, to achieve a “fuller, richer flavour experience”.

To create the whiskey, Conor Hyde selects only the finest Irish whiskey, which is then ‘finished’ in a variety of vintage oak casks. Each variety is made at one distillery partner in County Cork, before being matured in a bonded warehouse in Little Island, County Cork.

Once the casks have been selected, HYDE flame a specific char level, at least 250 degrees Celsius, for between 15-45 seconds to each vintage oak cask type before filling. This helps open micro-channels in the wood allowing the whiskey to venture deep into the oak, hugely impacting the flavour. Oak casks are sourced from around the world, to give each variation of HYDE Whiskey its distinct profile. These include the likes of toasted Oloroso Sherry Hogshead casks from Spain, dark rum from Barbados, bourbon barrels from Kentucky, and ex-Burgundy vintage Pinot Noir casks from the Cote’d’Or vineyards near Dijon, France. The team also experiment with port, madeira, cognac, and even beer casks.

The time and effort put into the cask wood management and the sourcing of high-quality vintage oak casks from around the world has contributed to HYDE having been one of the leading success stories of the past decade’s Irish whiskey ‘renaissance’.

All ten HYDE Irish Whiskey expressions are now available in the UK, including the HYDE No.1 President’s Cask – aged in bourbon barrels for 10 years before being finished in sherry casks from Cadiz in the Andalucía region of Spain; HYDE No.5 The Áras Cask; and HYDE No.4 President’s Cask – a single malt Irish whiskey finished in rum casks. Triple distilled on a traditional copper pot still, from 100 per cent malted Irish grain barley, the HYDE No.4 President’s Cask is originally aged in 200 litre, flamed-charred oak casks from Kentucky, formerly used for ageing bourbon. It’s then transferred to flame-charred dark rum casks from Barbados, where it’s ‘finished’ for a further six months.

On the nose, a rich backdrop of sweet rum is joined by some aromas of sultana, cinnamon, toffee, caramel, and almond. Bittersweet vanilla prevails on the palate alongside further notes of toffee and cinnamon, plus apricots and chocolate, while sultana’s presence re-emerges on the long, spicy finish with dark nutty character and impeccable smoothness.

The full collection of HYDE Irish Whiskeys is available in the UK from Master of Malt, RRP from £39.95.

RELATED: Spirit of the Week: No.1 Woodford Reserve Exclusive Selection