Volunteering for Compassion London, an organisation made entirely of unpaid staff who source, prepare and distribute about 3,000 meals daily to people in London – all based on donations. 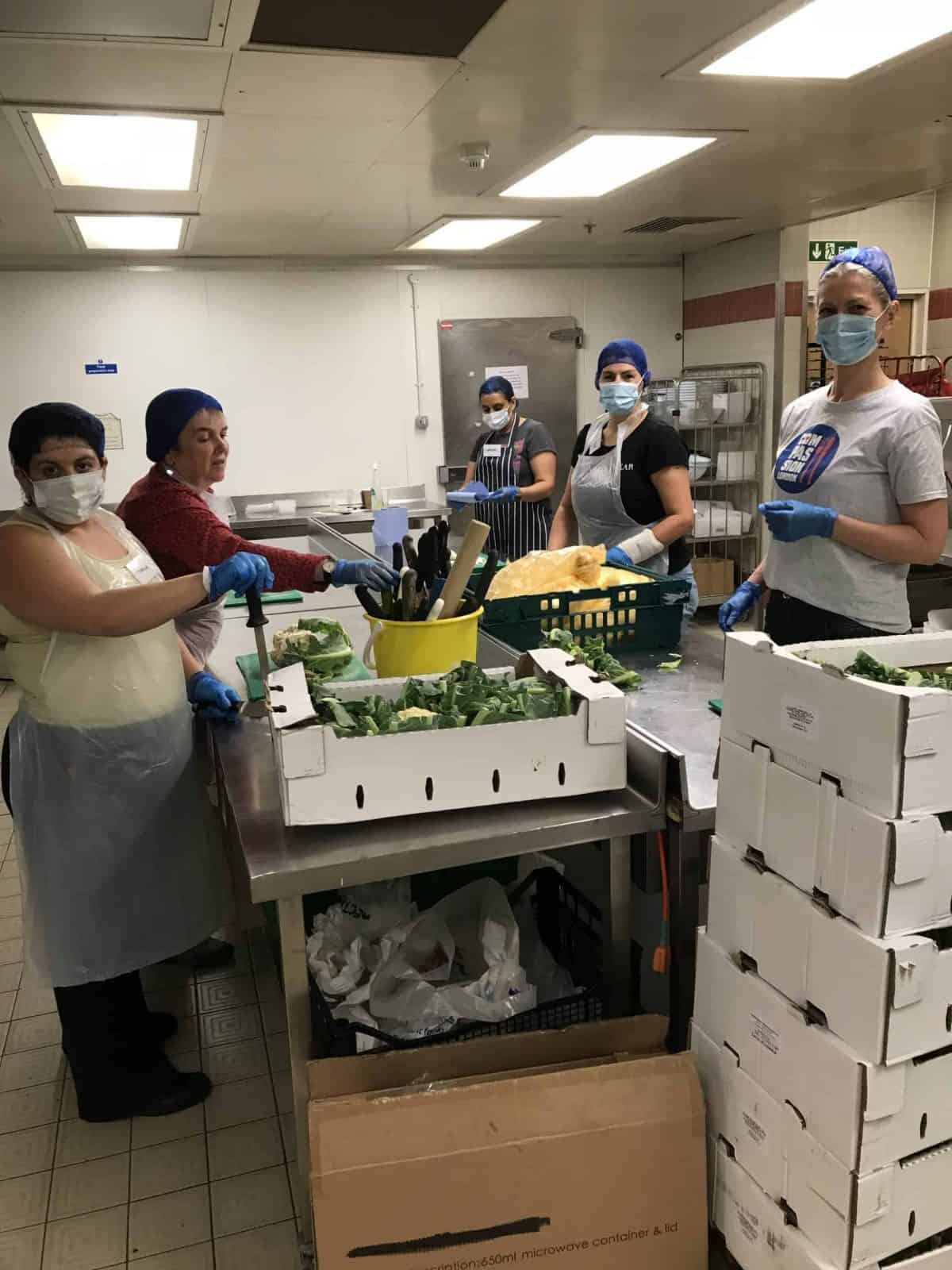 When Ernest Ogaraocha was furloughed from his in-house catering job due to the pandemic, the professional chef thought he’d continue doing what he does best: cooking.

Ogaraocha, 54, signed up to volunteer for Compassion London, an organisation made entirely of unpaid staff who source, prepare and distribute about 3,000 meals daily to people in London – all based on donations.

He now spends his days with about thirty other volunteers in an enormous kitchen on the second floor of north London’s Alexandra Palace, cooking batches of everything from lentil salads to venison stew.

“I love it. I’ve never done voluntary work and the pandemic has opened my eyes,” Ogaraocha said earlier this week, taking a break from preparing hundreds of portions of sweet and sour beef with broccoli.

The single-serving containers are packed into crates and given to a fleet of volunteer drivers, who distribute them to organisations such as the Muslim Welfare Society and Jewish charity groups. Initially the food was prepared to feed NHS staff but now it goes to anyone who needs it.

“People need to get fed and if we don’t do it then nobody’s going to do it,” added Ogaraocha, adjusting his face mask. “The way I see it is that we lead by example.”

Alexandra Palace, known as the People’s Palace and affectionately referred to as ‘Ally Pally’, is certainly living up to its name by playing host to several organisations that are working to feed the hungry during this time of uncertainty and need.

In an earlier time of trouble, during the First World War, the Palace’s large halls were used to house refugees from Belgium and the Netherlands, then were transformed into an internment camp for “enemy aliens” from countries such as Germany, Austria and Hungary.

Refugees again stayed in the Palace during the Second World War, before British troops returning from Dunkirk used it as a staging area.

And now it has opened its upstairs catering kitchen to Compassion London and its Great Hall downstairs to Edible London, another charity that helps those in the community suffering from food poverty.

“People like me who have grown up here feel a real connection to the place as we live in the foothills of Alexandra Palace,” said Sally Stevens, in her fifties, who has been a fundraising volunteer and tour guide at the Palace for the past five years.

“Haringey is a really mixed borough and people have made it their home – and Ally Pally is like the jewel up on the hill.”

As the Victorian building is sitting empty the trustees were happy to hand it over to charities to use, Stevens said. “The theatre is dark and the concerts are cancelled for the time being, but something really great is happening at Ally Pally, providing thousands of meals for people in need.”

Edible London’s goal is to help people “to eat a more nutritious diet and, in turn, learn to feed their community through food growing”, according to its website. Founded in 2018, it rescues food that would be destined for landfill and also helps people learn about gardening and eating healthily.

On Ally Pally’s ground floor the charity redistributes the “best bits”; cleans up food that’s not “very, very nice” to use as food ingredients; gives away “kitchen” food to make into things like jams, and transforms old food into compost, said volunteer Victoria Ruiz, 38, who normally is a part-time admin at an English language school.

“Nothing is wasted that is on our premises,” said Ruiz, standing in the middle of a cavernous hall filled with hundreds of boxes of fruit, veg and other cooking ingredients. “Our motto is ‘zero waste and zero negativity’,” she told The London Economic.

“Ally Pally is an amazing place to be working,” added volunteer Robbie Derrick, 29, a professional sound recordist for film and TV, who was wearing a hi-res vest and helping coordinate deliveries of food crates.

“When I started volunteering two months ago we were in an underground car park at Tottenham Hotspur Stadium, which of course was great as there is lots of space,” he said.

“But moving here is a much nicer place to be physically, with big high ceilings and big rooms.”

Back upstairs at Compassion London, a typical day begins with a team meeting in the middle of the kitchen, where founder Leon Aarts, who is originally from the Netherlands, thanks everyone in person. In 2015 he helped refugees through his brainchild Calais Kitchens – now he is helping anyone suffering due to COVID-19.

The bulk of the food is donated in bulk, said Aarts, although they have to purchase some things such as rice and condiments from donations, which have come from such varied organisations as The Phoenix Project, Ocado and Hello Fresh.

Volunteers are provided with full PPE including face masks, gloves, plastic aprons and hairnets, and are encouraged to observe social distancing.

The Palace represents the charity’s fourth kitchen in eight weeks. They use it rent-free but pay utilities. “We’re very happy here,” said Aarts. “It’s a nice place and the right size, with fridges and cooking stuff. It’s easily accessible as well, and there is parking.”

On a typical day, two chefs argue good-naturedly near the “packing station” about whether or not to add tomato sauce to a salad that already has a vinaigrette.

Product development coordinator Natasha Sahins, 24, has just started her second week of volunteering and said she is really enjoying it.

“It’s good to see that food is not going to waste, that it’s going to be beneficial to people who need it,” she said. “It also doesn’t make my furlough seem as gloomy.”

Doing it for free

For event caterer Naomi Clucas, 48, a volunteering opportunity couldn’t have come at a better time. “All my events have been postponed and I wanted to find a way to utilise my time properly. I didn’t want to just sit at home,” she said.

She started volunteering at the very beginning of the pandemic and has worked in all four of Compassion London’s kitchens.

“I absolutely love Ally Pally. It’s big enough for everyone to be socially distanced and it’s also a very relaxed atmosphere,” she said.

“We’re not doing NHS stuff anymore because they no longer need it. We know it’s more families in need, people who have lost their jobs and cannot afford meals.

“Sometimes we use a school as a central point or a hub and people come and collect the food they want, or there will be a central area where they arrange their own drivers to collect the food and deliver to people in the community.”

Professional chefs and caterers are not the only people who are volunteering, she said. “We also have a barrister, an optometrist, journalists, students, school teachers and nutritionists. It’s a massive range of people.

“And we are all doing it for free.”