A chippy owner has created a giant foot-long ‘pig in a blanket’ as a Christmas treat for customers — which is over 1000 CALORIES. Matthew Wilson, 28, says hungry diners have been queuing round the corner to get their hands on the mouth-watering delicacy, thought to be the country’s biggest. Bacon wrapped sausages or pigs […] 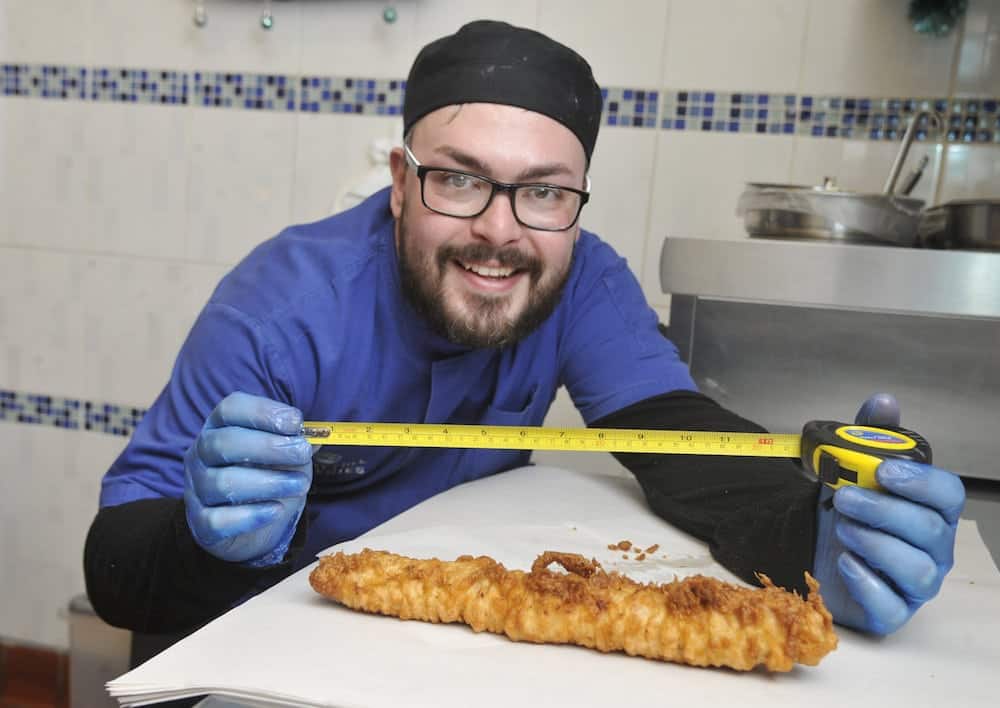 A chippy owner has created a giant foot-long ‘pig in a blanket’ as a Christmas treat for customers — which is over 1000 CALORIES.

Matthew Wilson, 28, says hungry diners have been queuing round the corner to get their hands on the mouth-watering delicacy, thought to be the country’s biggest.

Bacon wrapped sausages or pigs in blankets as they are affectionately known are a familiar fixture on dining tables up and down the country.

With the ability to feed an entire festive party, Matthew’s mammoth portion is the perfect centrepiece for Christmas Day.

The battered foot-long offering is accompanied by two stuffing balls and a gravy topping for just £2.30 and won’t leave a punter “squealing” for more.

Matthew says he was “boar’d” of the same old Christmas classics and decided to reinvent an old favourite.

He came up with the idea off the hoof while thinking about his own top-pick Yuletide dish.

It takes him about an hour-and-a-half to knock up 50 servings of the pork and bacon delicacy – using 7 kg of meat.

He said: “It’s a behemoth of a sausage – it’s absolutely vast. Especially with the stuffing balls.

“I had one guy come in with his wife and she ended up having to help him out.

“My three children shared one and they couldn’t even finish half.

“Every year I try and do something gimmicky for Christmas as an ode to the season.

“This year I asked myself ‘what’s the best thing about Christmas dinner?’ For me it’s pigs in blankets and stuffing balls.

“But I wanted to do something different with it – anybody can chuck some bacon on a sausage.

“So I made a few prototypes and tested them out – they were absolutely phenomenal.

“I’ve been told I’m not allowed to eat anymore by my wife now.

He added: “The response from customers has been absolutely phenomenal.

“This is not a small meal and you’re probably talking well in excess of 1,000 calories.

“But fish and chips is in my blood so really I’ll batter anything.

“The batter keeps the sausage together quite nicely though and you can cut them into pieces and share them – they’re actually quite clean and tidy to eat.”

Matthew put the festive meat treats on sale this morning to mark the beginning of December but stocks are limited.

Father-of-three Matthew, who owns Penny Hill Fisheries in Leeds, West Yorks., has been running chippies for ten years but the trade has been in his family since the 1920s.