Bristol-based vegan charity, Viva!, have been campaigning against the sale of foie-gras since 2009. One of their greatest achievements in this campaign was in 2011 when, with the support of Bath Animal Rights Group, Bath City Council passed legislation to ban the sale of foie-gras on all of their registered food outlets. Despite the ban, […] 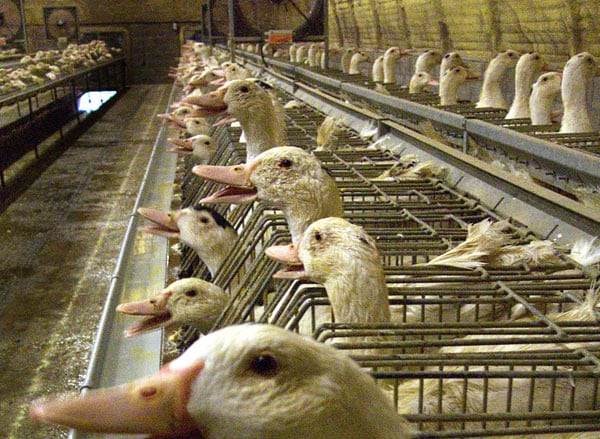 Bristol-based vegan charity, Viva!, have been campaigning against the sale of foie-gras since 2009. One of their greatest achievements in this campaign was in 2011 when, with the support of Bath Animal Rights Group, Bath City Council passed legislation to ban the sale of foie-gras on all of their registered food outlets.

Despite the ban, local pub the Star Inn planned to sell foie-gras at Pub in the Park festival in Bath next month. However thanks to the vigilance of Bath Animal Rights group, their plans were thwarted.

Viva! received the news and concerned the ban was in jeopardy, were keen to act quickly and show their support by reminding Bath City Council members and the organisers Pub in the Park of the ban.

Subsequently, following Viva!’s combined efforts with Bath Animal Rights, the organisers of Pub in the Park have confirmed that foie-gras will not be making an appearance at the festival. As a vegan campaigning organisation, of course Viva! would rather the organisers drop all meat from the menu, however this is at least a step forward in showing that this cruel product is not acceptable.

Lex Rigby, Viva! Campaigns Manager says: “Foie-gras is mostly produced by imprisoning birds in cages so tiny they can’t move, and forcing a pipe down their throats to force feed the animals until their livers swell to ten times their natural size. I can’t imagine why anyone would want to eat it – or be involved in its sale. It is quite simply torture in a tin. There is nothing humane about mechanically inducing disease in a bird.

We’re delighted that Bath City Council are honouring their word and keeping in place the foie-gras ban. However there is still a long way to go until this horrific industry comes to an end.”

Bath and North East Somerset Council leader, Councillor Tim Warren (Conservative Mendip) said: “Bath and North East Somerset Council cannot support the sale of foie-gras and, on personal level, I think it is a completely unacceptable way of farming, so I welcome this sensible decision to remove it from the menu. Pub in the Park celebrates the very best food in the country and we welcome it to Bath, I hope it is a great success.”

Viva! also contacted councillor, Paul Crossley, who supported Viva!’s campaign back in 2011. Paul said: “Bath and NE Somerset was one of the first Councils to ban the sale of this product at its café and food outlets and so I am pleased that the organisers are respecting our policy for its event being held on Council owned land. I am sure the event will be a great success and now it will be even better without foie-gras. To put it simply foie-gras is not an acceptable way of producing a food.”

Foie-gras production has been deemed so cruel, it is actually illegal to farm it in Britain – leaving the paté, dubbed ‘torture in a tin’, to be imported from elsewhere – mainly France.

Viva!’s long-running campaign, which began in 2009, aims to make the entire of Britain foie-gras free by highlighting the cruelty and suffering endured by birds involved in its production. They were the first organisation in UK to take on the foie-gras industry and have made significant progress in discouraging both the public and caterers from using the cruel product.

Viva! have printed almost one million leaflets to raise awareness on the cruelty of foie-gras production. Their campaign has persuaded supermarket chain Lidl and wholesalers Makro to stop selling foie-gras in all of their stores nationwide.

Through targeted media and peaceful demonstrations, campaigning by Viva! and other organisations also saw House of Fraser and Harvey Nichols both drop this cruel product, as well as many independent hotels, restaurants and delicatessens. In 2011, Viva! persuaded Thomson Cruises to remove foie-gras and in 2012 campaigned against its use on BBC cookery shows and Channel 4’s Come Dine with Me. In 2013, Viva! and L214’s investigation into footage of producers who were, at the time, supplying Gordon Ramsay’s foie-gras for his British restaurants made national front pages in the UK and across Europe. Fellow chef, Heston Blumenthal, removed foie-gras from all his menus after campaigning by Viva! in April 2015. Viva! also scored its biggest success to date by persuading Amazon – the world’s largest online retailer – to delist foie-gras on its UK marketplace.