TLE visits the region of Veneto to learn more about Italy’s finest sparkling wine and the Prosecco DOC Consortium’s work to protect its reputation. 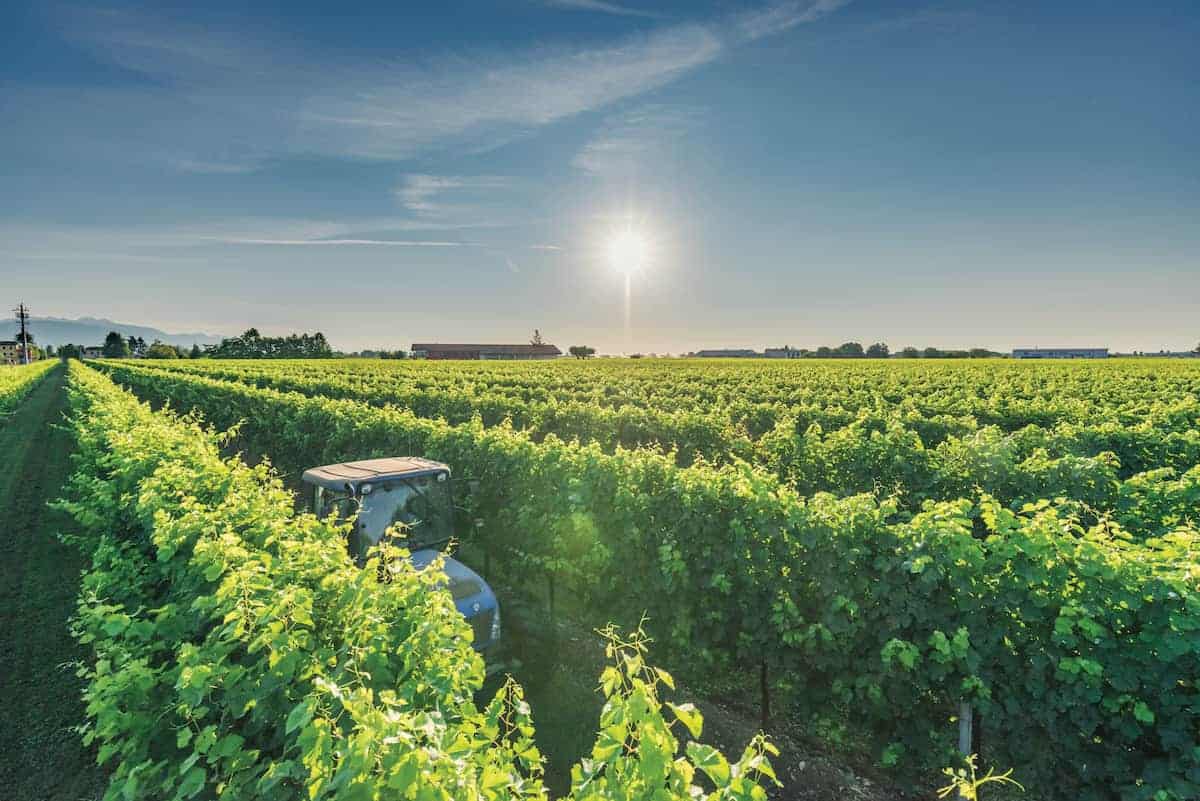 Prosecco is big business in north-east Italy. While the region of Veneto isn’t necessarily known for its gastronomic prowess, the surrounding area’s wine production is generally exceptional.

Produced in Veneto, Friuli and Venezia Giulia (named after the village of Prosecco in Trieste), the wine’s popularity has grown exponentially in recent years, with much of the total yield exported, with the foreign market accounting for €1.8 billion in 2018, on top of the €600 million from the Italian market. It’s also perhaps unsurprising that the U.K. is the largest export market, with 35.9 per cent of last year’s total production making its way to the UK (approximately 166 million bottles). The USA follows, with 20.9 per cent of the total export, explains Tanja Barattin at the Prosecco DOC Consortium’s headquarters in Treviso, a historic city in Veneto. While Britain’s Prosecco obsession is omnipresent, its general reputation can be less than favourable: often disregarding the sophistication of Prosecco at its best (with standard 750ml bottles on sale for as low as £3.99 in major British supermarkets this Christmas).

On 17th July 2009, the decree for recognition of Prosecco DOC was passed, with the consortium currently celebrating its tenth anniversary, launched just a few months later, starting a quantitative and qualitative growth process that is summer up in over 464 million bottles, as of last year. Set up with the key intention to protect Prosecco, a name that’s protected but constantly exploited with imitation products potentially damaging to the wine’s reputation. At the time of writing, the Prosecco DOC consortium is fighting more than 30 cases of name evocation. In the near future, the consortium also strives to improve quality and sustainability across the board.

On the tenth anniversary, Stefano Zanette, president of the Consortium for the Protection of Prosecco DOC, said: “We started with a production that didn’t reach 142 million bottles and, a decade and a tripled number of bottles later, according to our projections, we should close the year of 2019 with 485 million units. A leap of + 242 per cent which well summarises our commitment to quality and promotion, hand in hand with that for the protection of the Prosecco name. An intense road full of results that today evolves into a worldwide success, in prestigious cultural and sports collaboration and, above all, in the creation of many jobs and a fundamental contribution to the Italian trade balance, given that 75 per cent of our bottles are exported for a value of 1.8 billion euros”.

As well as discussing the history of Prosecco during a visit to the Prosecco DOC Consortium headquarters, Barattin also details the process involved in producing Prosecco, from vine-to-bottle, as well as outlining the range of different varieties available. Using grapes grown exclusively between the Dolomites and the Adriatic Sea, Prosecco must be produced with at least 85 per cent Glera, though other grapes such as Verdiso, Bianchetta trevigiana, Perera, Glera lunga, Chardonnay or Pinot can be added.

The wine is then split into a variation of different styles: still, frizzante, sparkling brut, sparkling extra dry, sparkling dry and sparkling demi-sec. Still, frizzante and sparkling (spumante) each refer to the amount of pressure in the bottle (frizzante has around 17 per cent, compared to spumante’s 82 per cent), while brut, extra dry, dry and demi-sec refer to the amount of residual sugar used in production. Brut typically contains 0-12 grams of residual sugar per litre; extra dry hovers between 12-17 g/l; dry can reach up to 32 g/l; and demi-sec – the sweetest – typically contains up to 50 g/l.

“Brut is more popular in the US, but Britain loves Extra Dry Prosecco”, details Paolo Favero, Export Manager of Astoria Wines, a producer in Refrontolo, just outside Conegliano. Here, wines are certified with the SQNPI Qualita Sostenibile trademark. Sustainability and environmental protection are a key priority at Astoria, with a solid selection of Prosecco styles on offer. The design of the bottles is also considered important, using glass from Murano glassmakers, emblazoned with a three-dimensional map of the Venetian canal system on each bottle. They hope to produce a new style in 2020, but it’s currently under wraps and yet to receive the consortium’s official stamp. Otherwise, Astoria’s “Galíe” Prosecco DOC Treviso is the winery’s most popular U.K. export, with minute and persistent perlage and an elegant, fruity bouquet . Favero explains that the U.K. market is very particular. “Everyone wants cheap wine”.

One of the most ubiquitous producers in British supermarkets (stocked in Waitrose and Sainsbury’s), Valdo operates from Valdobbiadene, just below the Alpine-Dolomite areas of Veneto. Launched in 1926, the brand is exported to 55 countries, particularly popular in Russia. Valdo is continuing to attempt to expand distribution and leap forward in the U.K. Only biologically organic products are used, and there’s also much talk about Prosecco and food pairing. Given the residual sugar content and complexity of Prosecco it’s an interesting match to a wide variety of dishes, from cheese, cured meats and risottos, to meatloaf and octopus, as demonstrated during the visit.

Area Manager, Emiliano Fermo, also suggests flute glasses aren’t ideal for tasting Prosecco as many of the notes and complexities are left in the glass. Valdo Extra Dry is elegant with bold notes of apple, produced with 100 per cent Glera, cultivated in hard clay terroir. Their Valdo Organic Bio Brut, on the other hand, has enhanced minerality, vaunting prominent floral notes and savours of pear.

At Ca’ Di Rajo, Renza Zanin also discusses Brut’s global rise in popularity, explaining that the market only called for Extra Dry just nine years ago. An old family business having recently undertaken its 82nd harvest, Ca’ Di Rajo is now run by three brothers, using a Bellusera vine growing method: an eco-friendly approach thanks to a set-up which requires hard work to be done by hand (with just one old tractor). Bellusera vines also provide grapes with a more concentrated flavour and aroma, aged around 40-60 years-old on the estate. Ca’ Di Rajo’s Extra Dry Prosecco has an unexpected mature aroma, with notes of apple and lychee while the river gravel close to the vines provides the mineralogy. The Dry, however, is very sweet – syrupy, almost – also vaunting notes of ripe apple.

Working with over 30,000 hectares of vineyards (19,922 in Veneto); 11,102 farms and 1,211 wine makers, 550 million bottles of Prosecco DOC are produced annually. A co-operative just outside the centre of Ponte di Piave, Cantina Viticoltori Ponte does things a little differently. A co-operative, Ponte was founded in 1948 as a result of “the tenacious determination and ambition of a small group of winemakers who joined forces to tackle the challenging post-war years and the period of reconstruction.”

Today, the company boasts 1,000 winemaking families farming 2,500 hectares of land throughout the Veneto region. Growers bring their grapes, which are weighed and purchased at a price based on quality and amount, then produced by Ponte. Produced entirely from Glera, Ponte’s Prosecco DOC Treviso Extra Dry has a lively, persistent taste with moderate alcohol. Almost half of the entire production (12 million bottles) was exported to the UK in 2018.

Named after white gravel that’s scattered around the vineyard, La Jara is an entirely organic producer in Piave. Using gravel and roses in cultivation (roses are sentinels – if illness is going too spread, they’ll receive the first blight), La Jara’s organic approach is still relatively unconventional, favoured by fewer than 30 per cent of producers. During the first year of switching to organic, they lost almost the entire crop, while the ‘Asian stink bug’ remains a problem in Veneto. Here, Sulphur and copper is used to prevent bugs and mould, but they run off in the rain. When it rains, it’s thus necessary for the entire process to begin again – explaining why organic wines are far more popular amongst producers in the warmer south.

The wine’s production is also a rigorous process. Machines are utilised to ensure the quality of each grape picked. While conventional wines use chemicals to make the bubbles feel smaller inside the mouth, La Jara’s process takes far longer to achieve the same results organically. Given the labour and high price of machinery used here, the final product has a low market value, so a huge volume is necessary to make it economically viable. 98 per cent of the total yield is exported. While the U.K. remains a problematic market for organic growers, as prices are so low, La Jara’s Frizzante is the most popular in the U.K. Considered Extra Dry, although Frizzante doesn’t fall into categories, the wine has gentler bubbles and a higher sugar content. “In Frizzante, the bubbles add flavour, whereas in Spumante they add texture,” explains Export Manager, Francesco Galardi.

Galardi is particularly proud of the Dry Millesimato and the Brut. “We know that we have a base wine that has the quality. We don’t need to cover anything of the wine with sugar.” Limited to just 6,000 bottles, the Dry Millesimato 2018 has a short, tart finish, while the Brut is rampant with yeast, one of the driest on the market.

Unlike Champagne, Prosecco doesn’t stay with yeast so it’s less complex to understand, retaining freshness and plenty of elegance when done well. “Even the French are starting to appreciate Prosecco, with a 35-45 per cent growth in market,” notes Galardi. Far, far more than a cheap, bottom-shelf Champagne alternative. “It’s like comparing a Ferrari to a Fiat,” he says. “They’re both great, but it’s a completely different wolf; it’s a completely different business.”