“Here’s to alcohol, the rose colored glasses of life.” F. Scott Fitzgerald wrote in his 1922 novel, The Beautiful and Damned. On modern life, Ernest Hemingway also claimed: “Modern life, too, is often a mechanical oppression and liquor is the only mechanical relief.” I could go on quoting famous authors all day, outlining their published […] 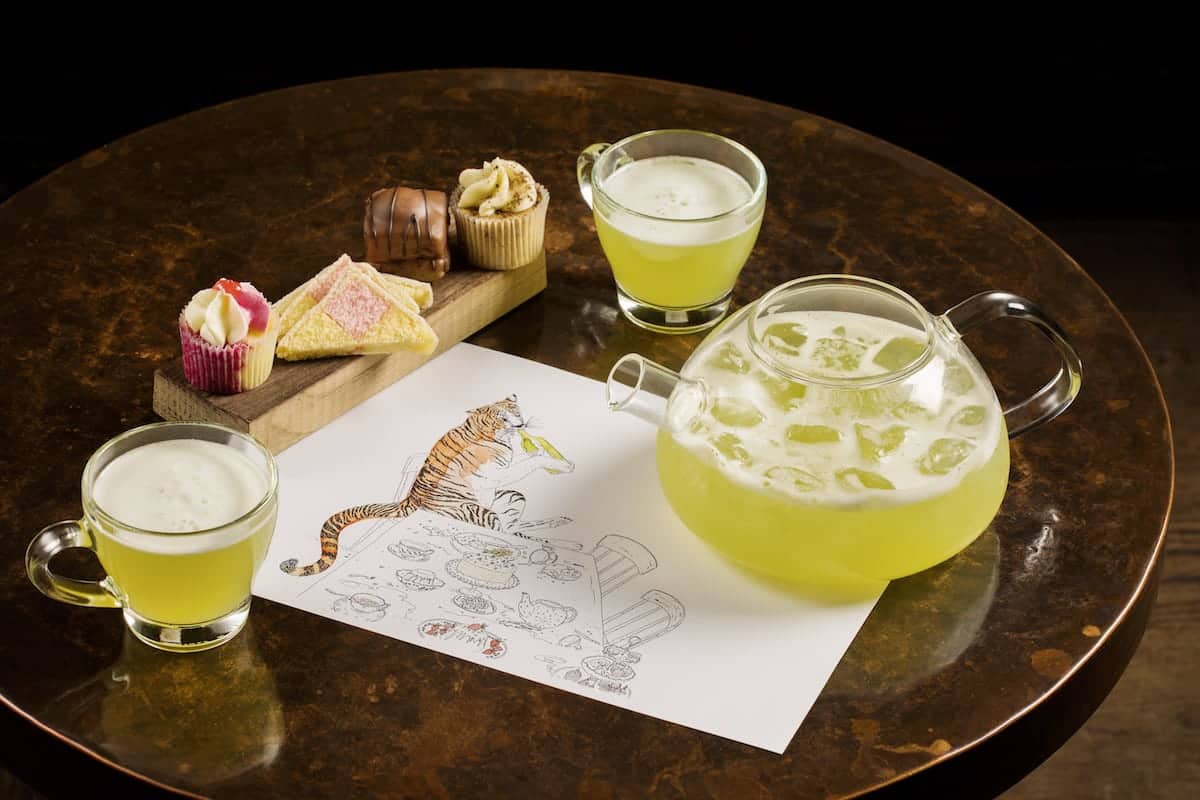 “Here’s to alcohol, the rose colored glasses of life.” F. Scott Fitzgerald wrote in his 1922 novel, The Beautiful and Damned. On modern life, Ernest Hemingway also claimed: “Modern life, too, is often a mechanical oppression and liquor is the only mechanical relief.” I could go on quoting famous authors all day, outlining their published relationships with drink. The point, however, is that literature and alcohol have deep intrinsic links that aren’t always flagrant on the surface. But with such a crossover between the two, it seems fitting that Jason Atherton’s The Blind Pig cocktail bar has just launched a brand new menu of literature-inspired cocktails, coinciding with World Book Day.

Accessible through a secluded door fortified by a security guard armed with a walkie-talkie, The Blind Pig is located above Atherton’s Michelin starred Social Eating House. At seven o’clock on a Thursday evening, the dark room – evocative of classic speak easies – is absolutely heaving. Soon after taking our seat, a waiter appears with a jug of cucumber-infused tap water and two of the brand new menus. Featuring striking artwork from illustrator Masha Karpushina, the menu intentionally reads like a story book. The second series of the bar’s ‘Long and Short Great British Tails’, the new menu features 12 drinks heavily based around classic children’s stories.

Created by The Social Company’s Group Bar Manager, Jay Doy, these include the likes of ‘5-a-day’ (£11), inspired by The Very Hungry Caterpillar. This drink includes ice cubes made from the five fruits featured in the story (apple, strawberry, pear, orange and plum), matched with Patrón tequila, lime cordial and ‘Tequila mixer’, garnished with a gummy caterpillar. Elsewhere, Beatrix Potter’s Jemima Puddle-Duck-inspired ‘Fowl Play’ (£10.50) harbours Aylsbury Duck vodka washed with duck fat and ingredients synonymous with duck cookery: honey, orange and thyme. Elsewhere, The Tiger’s Tea Party (£28.50) is an extravagant drink for two people: a play on tea-for-two. Served in a glass teapot, with a miniature bottle of Moët & Chandon and a cake selection on the side – the cocktail is made with Bird’s ‘Pisco’, Nikki tigers milk, cilantro Falernum, pineapple and jalapeño liqueur.

We order a round of drinks, and although the waiter insists they may take a while, as the menu is so new, they’re quick to arrive. Built around A.A. Milne’s Winnie the Pooh, ‘Hunny Pot’ (£10.50) is served in an opaque clay vessel, similar to those favoured by Mahiki; combining Bacardi Oro with mead, cider brandy, honey and orange blossom to produce a sweet, easy-drinking aperitif. Like all of the best cocktails, the drink is also served with a food element – nuggets of honeycomb and a Percy Pig sweet. More food comes with ‘Paddington’s Lost and Found’. Served in a delicate coupe, the drink is topped with a slice of marmalade on toast (of course). While the toast tastes fusty, the bitter marmalade is a harmonic accompaniment to the Ketel One Oranje vodka and triple sec, offset by some richness delivered from a glug of Riesling.

Better still is a brown paper bag which conceals a bottle of ‘Best Bottle Butter-Bitter’ (£12). Based on J.K. Rowling’s ‘Butter Beer’, incarnated in her Harry Potter books, the drink’s conception is as clever as Hermione Granger. Initially hoppy, the beer element of the drink is instantly prominent, manifesting into a complex crescendo of profound butterscotch, orange, thyme and, finally, Monkey Shoulder whisky. The paper bag is also playfully filled with butterscotch Jelly Beans (not earwax or bogies, fortunately).

‘Augustus’s Chocolate River Punch’ (£12), on the other hand, is served in a miniature milk bottle, comprising Bulleit bourbon, Agricol rhum, chocolate liqueur, fudge, chocolate bitters and chocolate milk. On a recent visit to a marzipan factory, in Germany, my Wonka-esque preconceptions of edible wallpaper and chocolate rivers weren’t quite realised. The Blind Pig’s offering compensates completely, unleashing my inner greedy child (without the alcohol) while conjuring the exact strand of euphoric nostalgia the new menu at The Blind Pig intends to evoke.

The Blind Pig can be found at 58 Poland Street, London, W1F 7NS.