A delicacy synonymous with Japanese cuisine, fugu (pufferfish) is highly-prized, but potentially more deadly than cyanide. Each fish has enough tetrodotoxin (one of the world’s most powerful neutrotoxins) to kill 30 adults, so it’s hardly surprising it’s banned across the EU. In Japan, only rigorously trained chefs are licensed to prepare fugu, but the fish […] 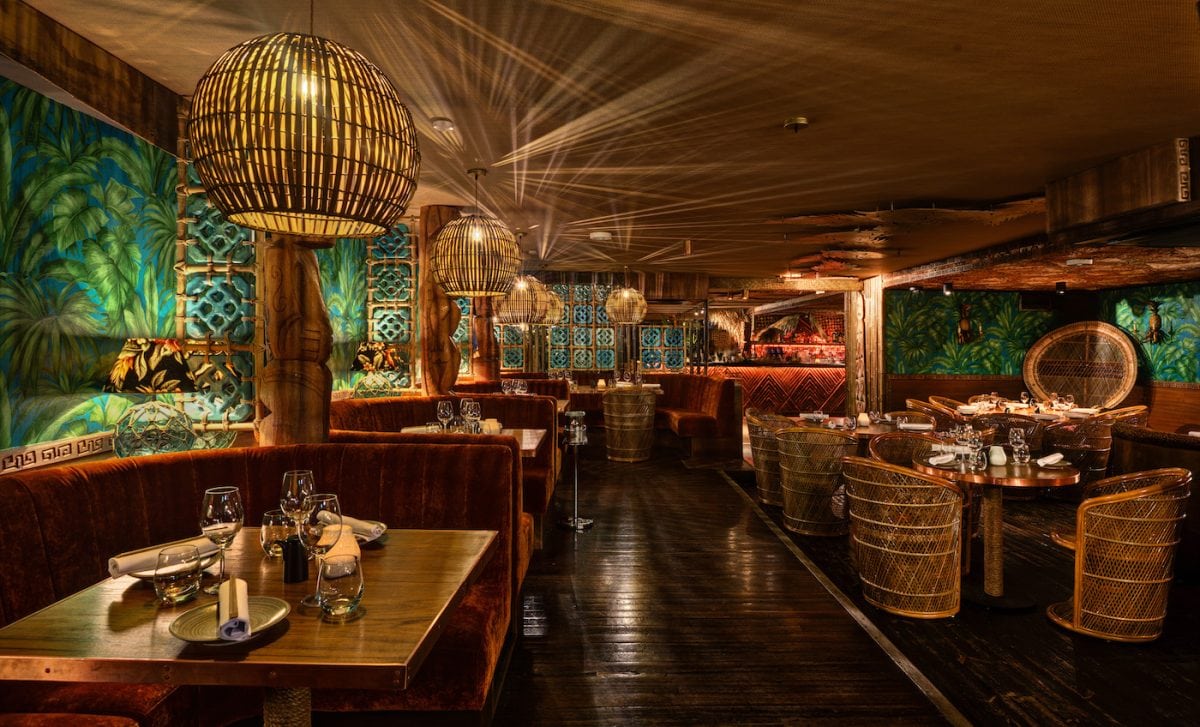 A delicacy synonymous with Japanese cuisine, fugu (pufferfish) is highly-prized, but potentially more deadly than cyanide. Each fish has enough tetrodotoxin (one of the world’s most powerful neutrotoxins) to kill 30 adults, so it’s hardly surprising it’s banned across the EU. In Japan, only rigorously trained chefs are licensed to prepare fugu, but the fish has still killed more than 20 Japanese diners since 2000.

If improperly prepared, the fish’s tetrodotoxin begins to attack the central nervous system immediately after eating, preventing neurons from communicating with the brain. After a few hours of abruptly shutting-down, the body eventually becomes totally paralyzed before an excruciating death from asphyxiation ensues. To cut a long story short, death by consuming pufferfish is seriously unpleasant, and so is dinner at its namesake Polynesian-inspired restaurant in Mahiki’s Kensington nightclub.

Pufferfish doesn’t serve fugu, though, which comes as quite a relief considering a kitchen this incompetent shouldn’t be trusted to boil an egg, let alone prepare one of the globe’s most toxic fripperies. Rather, the concise menu boasts a selection of Pan Asian dishes not dissimilar to those available at Novikov and Sexy Fish. As a venue it isn’t completely unloveable. We’re greeted and led to our table by particularly charming front of house staff, the space’s décor is unapologetically kitsch (fun even) in keeping with a playlist largely built on ‘60s pop and ‘70s disco, and the cocktails are impressive. A classic Zombie is served in a Boris Karloff-lookalike tiki mug and well mixed; as it should be for £15.

Ordering a selection of dishes to share, the waiter bluntly interrupts; “that is more than enough food”. All of the dishes then arrive within the space of ten minutes. The only sensible practice (besides getting up and leaving) involves eating the hot dishes before finishing with the cold appetisers. The service is quick, but so rushed that the entire experience is completed in just over an hour. This would be more understandable if dinner with drinks weren’t to cost in excess of £150. The lamb chops arrive soundtracked by Fontella Bass’ ‘Rescue Me’. I feel as though the ‘live’ DJ is blessed with the ability to read minds. That, or he’s also had the misfortune of eating here. Three lamb chops are served with a heap of bafflingly brilliant kimchi, and while the lamb is served pink – the fat hasn’t been rendered properly and is slippery like jellied eels.

Four thin gyoza skins are stuffed with lavish Wagyu beef, topped with truffle and steamed. Overlooking the futility of using such extravagant beef, only for the flavour to be completely disguised, an overwhelming taste of sweated onion and inescapably saccharine sauce joins the dull meat filling. All together, these dumplings have a taste similar to McDonald’s hamburgers, but less appetising. More Wagyu comes with a sushi-type dish of minced raw beef on a bed of sticky rice, bound by paper-thin daikon and topped with black truffle shavings. Though unremarkable, it’s one of the best things eaten.

Better still, strips of fatty Chutoro tuna are cut from the fish’s middle section, gently seared and lashed with a ponzu sauce rife with soy, which doesn’t completely overpower the fish. Sliced maki rolls apparently harbour Devon crab and crispy prawn, but taste of nothing more than their crowning discharge of brackish mayonnaise. Next, hunks of grilled octopus showcase such cack-handed cookery each hunk should come with the option of being pre-chewed. A side of bibimbap – a Korean rice dish – is churned in a stone bowl and insistently served at the table. In doing so, the rich egg yolk (acting as sauce) is unevenly distributed. As a result, my companion’s portion is enjoyable, but mine is arid and hostile.

To finish, we’re informed the restaurant does not offer a dessert menu. Instead, the waiter reels off a selection of dishes, before returning with news that none of the aforementioned puddings are actually available. But he negotiates with a ‘Mahiki Beach’, to share. A calamitous collision of melted chocolate, coconut and biscuit smashed to resemble saw dust. My friend hits the nail on the head: “It reminds me of working in a pet shop, aged sixteen. Having to clean the hamsters’ cages”. It returns to the kitchen almost completely untouched. A classic example of a restaurant designed for people who don’t like food, Pufferfish’s Pan Asian menu leaves me feeling entirely deflated, quite ironically.

Pufferfish can be found at 2A Kensington High Street, London, W8 4PT.