The American Bar at The Stafford London has launched a new menu of 16 cocktails inspired by America's rich history. 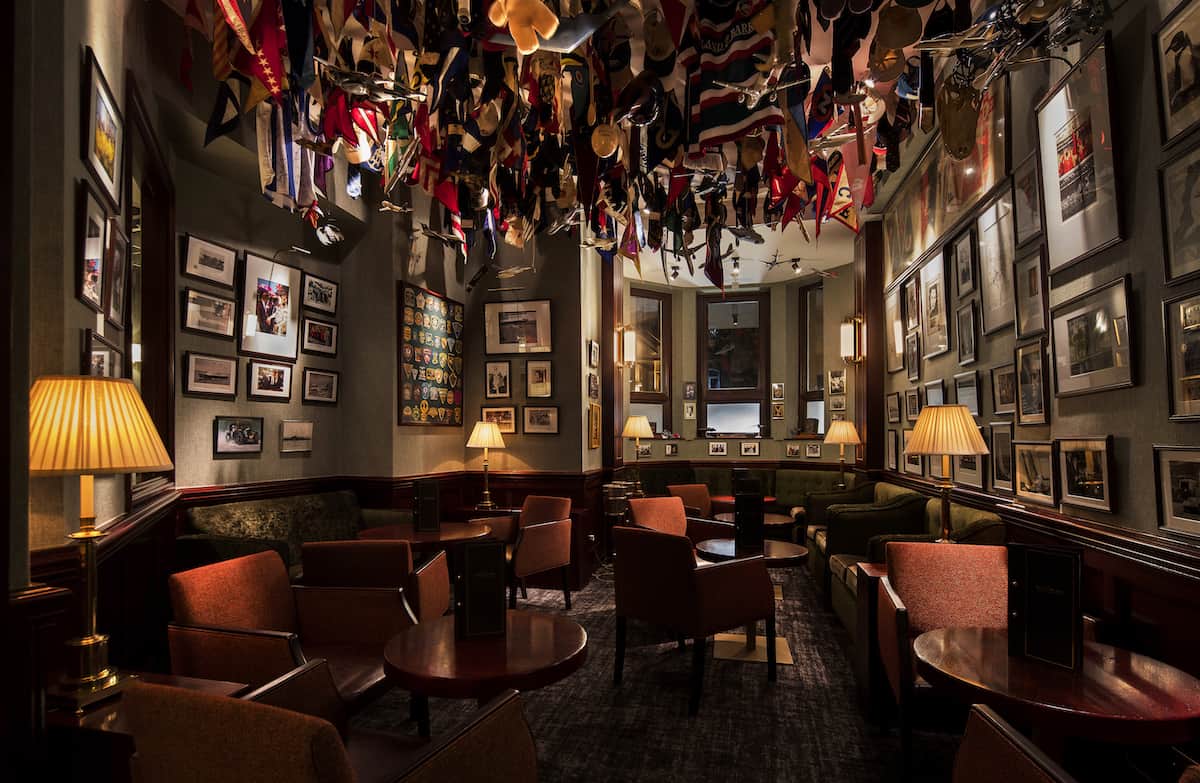 “The American Dream is that dream of a land in which life should be better and richer and fuller for everyone, with opportunity for each according to ability or achievement,” reads the introduction to The American Bar at The Stafford London’s new cocktail menu.

Honouring the bar’s heritage as one of the few remaining ‘American’ cocktail bars that became popular in London and Paris during the 1920s, the launch of the new menu also celebrates the space’s 2018 refurbishment, overseen by Rosendale Design. The original charm and ‘old school’ glamour of the bar with its secluded courtyard has been reserved, in keeping with the hotel, yet quietly modernised. Signed photographs and ephemera continue to act as a key interior centrepiece alongside countless American baseball caps hanging from the ceiling.

Titled ‘The American Dream’, the new menu features 16 unique, expertly mixed serves, overseen by Director of the American Bar, Benoit Provost, who has been at The Stafford for over 25 years. Offering guests a journey through America’s history, touching on monumental events in politics, music, sport and literature, each drink is inspired by “The American Dream and the individuals who pursued and achieved their own”. Moreover, The Stafford Culinary Director Ben Tish has developed a new all-day bar menu showcasing the season’s finest produce. Bite-sized doughnuts stuffed with crab, bolstered by a whisper of chilli and brown crab mayonnaise, are an absolute must-try; as are the chorizo and Piquillo skewers.

Inspired by the Wild West and the pioneers who braved the dangerous journey westwards, ‘The Frontier’ features Corte Vetusto Mezcal Espadin remarkably complemented by jalapeño-infused Hendrick’s gin, finished with pomegranate and lime. On the other hand, ‘Lady Liberty’ is inspired by one of the world’s most famous statues, paying homage to the French workers’ input to constructing the statue as well as the bar’s legacy of French Bar Managers. Served in a glass specifically designed to mimic the Statue of Liberty’s torch, the drink combines Hendrick’s gin with Solerno blood orange liqueur, St. Germain liqueur and French Green Chartreuse which adds an herbal edge as well as evoking the statue’s green, oxidised copper complexion. Further additions of kaffir lime leaf and lime juice add some freshness to the drink, ultimately securing balance.

Gin features again in ‘The 49er’, inspired by the ‘49ers’ who flocked to California to seek their fortunes during the Gold Rush of 1849. This fresh take on a French 75 mixes Champagne from the hotel’s 380-year-old wine cellars with lemon juice and Brecon Botanicals gin infused with mango, bringing a refreshing juiciness to the drink alongside a whisper of kombucha.

A dark, post-dinner drink, ‘Ellis Island’ is served in a glass globe – ideally enjoyed in two servings – and features a rich blend of Bayou Select rum, Mozart liqueur, Italian Ippocrate vermouth, peach and chocolate bitters. A glorious tribute to the landmark renowned as the first stop for European immigrants searching for a new life in the US. The American Dream, indeed.

The American Bar at The Stafford London can be found at 16-18 St James’s Place, London, SW1A 1NJ.