By Linda Marric @linda_marric Spike Lee’s adaptation of of the ancient Greek play “Lysistrata” by Aristophanes manages to avoid the usual pitfalls of play to screen adaptations. Chi-Raq is a play on words coined by Chicagoans, based on a statistic showing that more Americans have died from gun violence in the last decade than soldiers […] 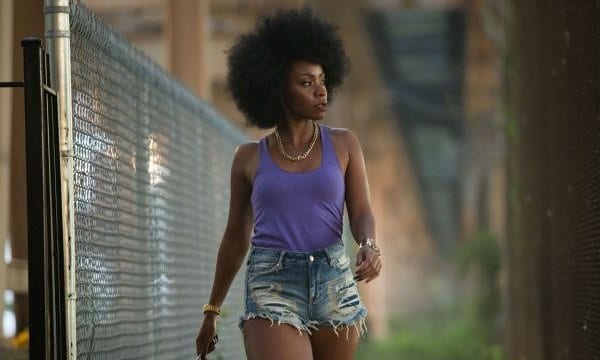 Spike Lee’s adaptation of of the ancient Greek play “Lysistrata” by Aristophanes manages to avoid the usual pitfalls of play to screen adaptations. Chi-Raq is a play on words coined by Chicagoans, based on a statistic showing that more Americans have died from gun violence in the last decade than soldiers in the Iraq war. In Chi-Raq Lee cleverly addresses not only black-on-black gun violence, but also delves into the misogyny of gang culture; it is a cry for peace as well as a call to arms.

Written by Lee himself in collaboration with Kevin Willmott, the film tells the story of Lysistrata (Teyonah Parris) who is in love with Demetrius (Nick Cannon), a rapper who also goes by the name Chi-raq. Demetrius is the leader of the Spartans who have been involved in a gang war with the Trojans, a rival gang lead by Cyclops (Wesley Snipe). Things quickly come to a head when an 11 year old girl is caught in a crossfire and killed by a stray bullet. After her house is burnt down by Cyclops’s gang, Lysistrata makes the decision to move out of the house she shares with Demetrius and moves in with her neighbour, the wise Miss Evans (Angela Basset), a peace activist with a house full of books and memories. Pushed by Miss Evans, Lysistrata takes matters into her own hands when she gathers women from rivals gangs and enlists them to her cause. The women agree to withhold sex from their partners until there is a truce between the gangs. The movement soon spreads, first around the neighbourhood, the country, and finally around the world.

The film’s dialogue is mostly spoken in rhyming couplets with elaborate theatrical sequences, intercut with an inspired performance by Samuel L. Jackson as the all-seeing all-knowing narrator. Lee stays fairly faithful to the source material in his own way – this is after all a “Spike Lee Joint” and it plays by its own rules. Parris, who is almost in every scene, plays Lysistrata with attitude and gusto in a role which is a million miles away from her role as timid Dawn in Mad Men. Cannon, himself an R&B artist, is a true revelation, he plays Demetrius with a knowing swagger and just enough assured cockiness. A brilliant playful cameo from The Wire’s Isiah Whitlock Jr is sure to raise a few smiles. John Cusack’s electrifying performance as the white methodist preacher in a mostly black neighbourhood is also worth mentioning, especially in a sequence where he gives a powerful sermon decrying gun violence and inequality.

Chi-Raq is an angry film with an urgency and a poetic heart – it calls upon its audience to stand up for what is right. However, while the message is that of empowering women, the reliance on simplistic gender roles can at times seem a little reductive. This is not to say that the film doesn’t achieve what it sets out to do, but it does tend to rely too much on preconceived gender stereotypes.

Chi-Raq is on general release in cinemas from Friday December 2nd.