The Beslan School Massacre in Russia began on September 1st 2004 and lasted for three days before special forces brought it to an end. Of the 1,100 hostages held by the Chechen rebels, around 385 were killed, 186 of them children. Us/Them is a physical theatre response by playwright Carly Wijs and features two protagonists, […] 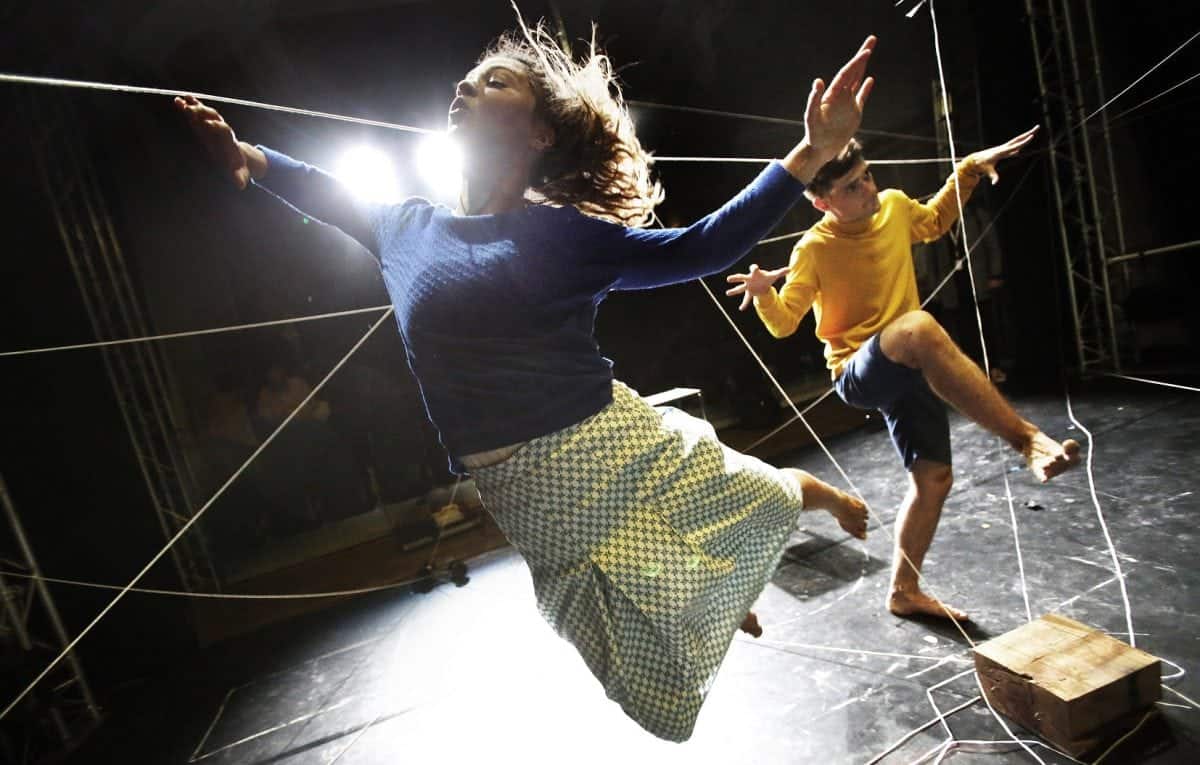 The Beslan School Massacre in Russia began on September 1st 2004 and lasted for three days before special forces brought it to an end. Of the 1,100 hostages held by the Chechen rebels, around 385 were killed, 186 of them children. Us/Them is a physical theatre response by playwright Carly Wijs and features two protagonists, a boy and girl, who interweave around the audience a web of their very different imaginary accounts of what it was and may have been like to experience the tragedy.

In itself, the work is a vividly imaginary piece making intelligent use of children’s play props and school equipment to paint an altogether different picture of a horror instigated by adults. Pieces of chalk are used to map out the school, coat pegs are sinister hanging devices and the elastic that might have been used for French Skipping, doubles up as the intricate wires of the bomb the Chechen terrorists placed in the centre of the gym. In the characters’ imaginations the childish objects take on a significantly more murderous meaning, but by doing so are also demystified, reducing their importance and make the retelling of the tragedy more accessible.

The boy and the girl both seem half child and half adult. Duality and conflict and contrast are all themes here. The characters struggle to be adult like as they recount the details of the attack and use mathematics to describe the facts of their story. Whilst doing so the two characters reengage in childish competition, telling fibs and hyperbolic stories in order to re-imagine different outcomes: they play the “My dad is better than yours” game fantasying that their dads, each stronger and faster than the other’s, will heroically save the day. In order to tell their stories they whisper and jostle and prompt each other under their breaths as if giving a presentation at a school assembly.

The piece is a precise investigation into what children and indeed adults may do when they have to process an appalling tragedy. Children try to be adult like, adults become child like, often this struggle happens within the same person: the title Us/Them does not only have to refer to the hostages and the terrorists. The show has a lot to say about art. But it has also got a lot to say about when people feel they can be themselves. When the fantastically agile Gytha Parmentier and Roman Van Houtven as girl and boy jump over and around each other and make robotic gestures with their bodies to describe the world of the terrorists, it feels very like the facts leave no room for the imagination. When they let loose their imaginations and invent other outcomes, they become personalities.

But there is another message coming out of Wijs’ tight and finely controlled production. Growing up is partly about ditching myths (all Chechens are rapists for example) and accepting fact. In these characters’ heads, there is a wide chasm between truth and fiction and the two hardly touch. But then again we all know that the art of living is not controlling what happens to us, but using it and as the two characters explore the tragedy through play and imagination they discover things they might never have done. And so do we: the biggest thing we learn is that our responses to such a tragedy might also be not so different from what we see onstage. We all have an inner child and they struggle with our adult selves.

The piece is an hour long and ends abruptly: one feels it may or could continue. But this is perhaps a symbol in itself. In such circumstances, can’t life end abruptly too?

Until 18th February at the National Theatre