Ben, a depressed boozy writer and park bench hogger meets university lecturer  Miracle as the pair exercise their respective pets in Brendan Cowell’s The Dog. At the close of day, Marcus, Ben’s flatmate, also taking his turn at the dog walking, does his best to pick Miracle up too, although she turns out to be […] 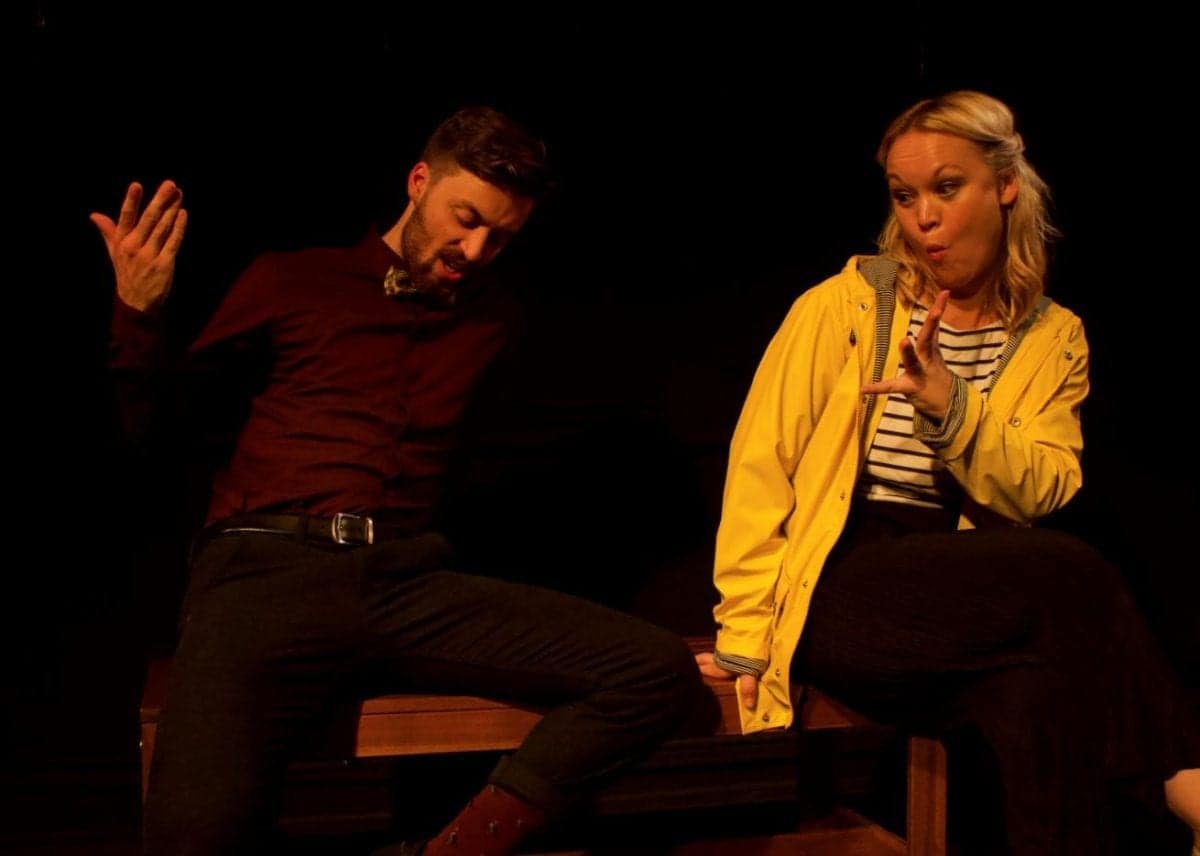 At the close of day, Marcus, Ben’s flatmate, also taking his turn at the dog walking, does his best to pick Miracle up too, although she turns out to be particularly adept at dodging their narcissistic flirtation methods.

The park bench becomes a sofa in Lally Katz’s The Cat, the second of these two forty minute romantic comedies where a divorcing couple, Alex and Albert, argue over who should take the moggy as they continue their lives with other partners. It provides surreal light-hearted relief from Cowell’s darker, wittily observed social commentary piece.

Though both plays are originally set in Australia here the action seems to take place in the UK and as a result it feels as if something has been lost in translation.

Elements of slapstick tomfoolery are retained, but the humour is played too much on the nose, losing some of the Jane Campion-esque dark comedy that is lurking in both works. It’s blisteringly sharp writing from the playwrights however.

In The Dog it’s as if the sense of what Cowell’s trying to achieve is nearly there in flashes of brilliance from director Sharon Burrell and the cast, but then the waters are muddied by an uneven pace which disallows the actors-Thomas Blackburne, Gemma Harvey and Frederick Di Rosa- to be as powerful and as scathingly funny-cruel as they need to be and as the scenes demand.

Therefore intended self-mockery and mockery of others drown a little in over the top caricature. Despite this, The Dog is compelling with its exploration of masculinity, alcoholism, Tinder and all the different kinds of ways human beings can be-well-tragically daft and self-obsessed.

The Cat, played by the same actors, and exploring similar themes, seems to be set somewhere up North. Though the style is more absurdist, underneath the frivolity it has a serious message.

Dependents-any dependents-are the ones who suffer the most in messy separations but are often the last to be considered by a couple at war. The way this dependent is dramatised here though-as if half human-might cause us to question who is manipulating who.

It might also have something to say about how humans project their flawed personalities and desires onto blissfully ignorant animals and that, with its Las Vegas-style ending, animals are far better equipped to play the game of life than we are.

Like The Dog the pace of this one fluctuates unevenly, undermining its powerful narrative drive.

These two plays are premieres of a highly successful programme that ran in Australia at The Belvoir. Even though the production here wrestles with two different styles and thematic concerns and does not quite win the contest, the writing keeps you involved with its toothlike ferocity.

Blackburne, Di Rosa and Harvey all shine-Blackburne in particular as the scraggy lonely writer.

Di Rosa and Harvey ably morph from aspirational geeks in The Dog to more anxious and wound-up bickering low brows in The Cat.

On at The Hope Theatre, Islington until 22nd Sept