The title of actress Tuva Novotny’s film alludes to something you can’t see coming, and that’s what happens both to the characters and the audience in this emotionally intense real-time drama. Things start slowly, with 12 year old Tea (Nora Mathea Øien) and her friend Anna (Ellen Heyerdahl Janzon) walking home from handball practice. Along […] 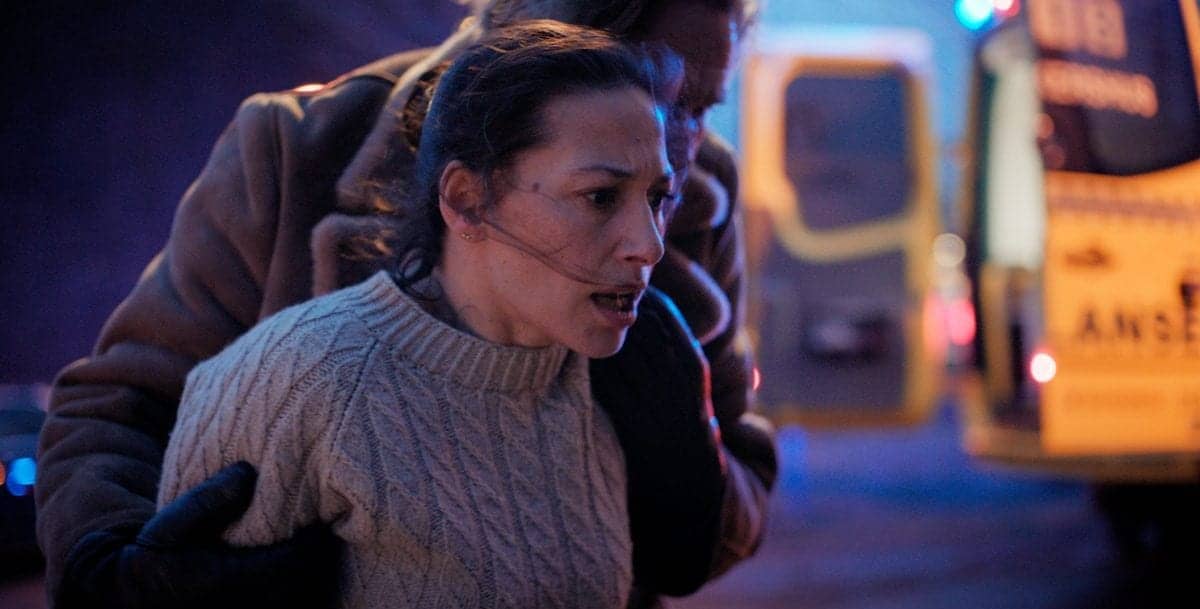 The title of actress Tuva Novotny’s film alludes to something you can’t see coming, and that’s what happens both to the characters and the audience in this emotionally intense drama.

Things start slowly, with 12 year old Tea (Nora Mathea Øien) and her friend Anna (Ellen Heyerdahl Janzon) walking home from handball practice. Along the way they talk about small things; homework, an upcoming exam, girls in their class who wear too much makeup. We’re settling in, we assume, for a low key but engagingly acted coming of age film. Then, 35 minutes in, the film pulls the rug. Tragedy hits, suddenly and hard. From here on in the focus shifts to the fraught chaos of the immediate aftermath and to Tea’s stepmother Maria (Pia Tjelta) and father Anders (Anders Baasmo Christiansen) waiting for news, trying to process what has happened.

Tuva Novotny hasn’t taken the easy route with her first venture behind the camera, not only is she marshalling an emotionally gruelling story and deliberate pacing, she appears to have opted to do it in a single 99 minute take. If that is how Blind Spot was shot – and if there are hidden cuts they are exceptionally well done – then it is an even more remarkable debut, but either Novotny proves herself a director with daring and sensitivity, setting herself up as a voice to watch. What is most impressive here is how pace is managed within the single shot. Novotny uses the camera in a way that reflects the emotional tone of the moment; , if slow, as Tea and Anna walk home, jagged as Maria deals with the first minutes after what happens to Tea, sterile at the hospital. The fact that this is all part of a single piece means that each of these shifts feels like a natural progression, rather than an abrupt change of style, and it subtly allows us to find ourselves on the same wavelength.

Some may find the film’s first act too slow, or the ebb and flow of its pace frustrating. As someone who loves coming of age cinema, the first act drew me in. The first time actresses playing Tea and Anna come across credibly as school friends, and their dialogue seeds enough things that you can see where the film that followed them to the next day of school and beyond might have gone. As someone who has spent a lot of time in hospital, if anything the last hour of the film moves unnaturally fast, but cinematically the pacing felt just right – forcing us to dwell in a moment with Maria and Anders, but always engaging us either with information or simply on an empathetic level.

It was the great Roger Ebert who said that cinema is an empathy machine. In this case, that machine is powered by a truly astounding performance from Pia Tjelta as Maria. We first see Maria in glimpses, she’s putting her young son to bed when Tea gets home, but the focus shifts to her suddenly and from that second, as she’s realising what has happened, Tjelta gives one of the most exposed emotional performances I’ve seen for a long time. Thanks to recent personal experience, I’ve seen some of what Maria’s going through and from shock, to anguish, to struggling to hold together, Tjelta doesn’t strike a single false note. It’s a harrowing watch; an hour spent seeing how the phases of experiencing the most acute pain evolve. The other performers match her for realism, but the way Tjelta manages to sustain her performance while always finding new and realistic colours within it is truly brilliant.

I don’t want to dig too far into the specifics of this film, its impact can only accentuated by coming to it as cold as possible. The choices here are well thought out and strong, right down to the closing credits which, I believe, may hide a revelation in their score. This is confident filmmaking from a writer/director in full control of her material, I hope it manages to find a wider release, but either I’ll be anticipating Tuva Novotny’s next film, which is already in .