by Adam Turner
in Music 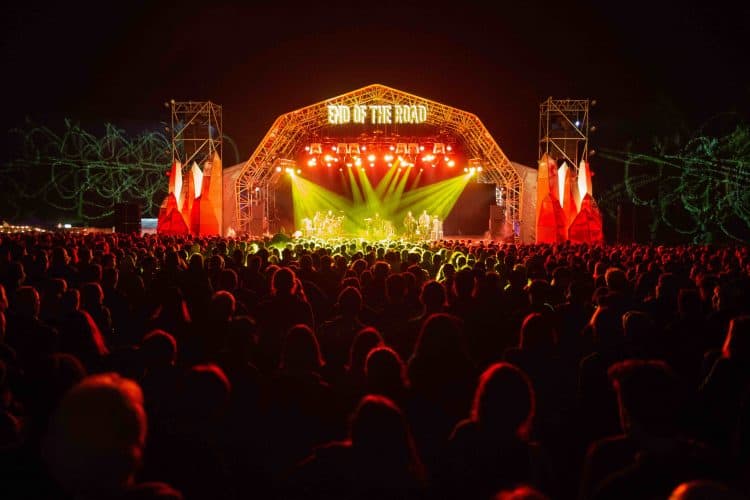 “Glastonbury lost its soul a long time ago.” Ray explains in the quiet camping zone at End of the Road festival where we’re about to pitch our tent.

“I used to go every year, but it’s full of people waving flags and trying to get on the tele now. You won’t see that here. This festival is everything Glastonbury isn’t. It’s properly independent and the ethos is incredible.”

Ray is the first person we bump into at End of The Road festival, and he knows his stuff. He bought his first Glastonbury ticket for £13 in the early 80s and went every year until the 2000s when he thinks it lost its way.

End of the Road – an independent festival at Larmer Tree Gardens in the Dorset countryside – is his new annual musical pilgrimage. The 60-year-old muso from Suffolk has been pitching his tent here since its second year in 2007. He has seen everyone from Laura Marling and Patti Smith to the Fleet Foxes and The Flaming Lips – probably his favourite performance to date. So he’s not a bad bloke to bump into on the first day of the festival. Before skipping off to throw up our tents, we ask if he has any insider tips.

“Go to the Garden Stage. It’s a special place, probably my favourite stage in the world. The setting and the sound system is out of this world. You’re going to love it.”

Which we do the following night when Radiohead’s Jonny Greenwood captivates all in attendance with his 12 piece orchestra. Communicating only through his computer, he runs through several pieces from Phantom Thread, including Alma – a highlight – and finishes with the otherworldly House of Woodcock. However, the performance of the set comes not from the man himself but pianist Katherine Tinker who plays a memorable solo, at times slapping the keys with her elbows and palms to a mesmerised crowd. Greenwood does his bit, too, of course, with a three-part guitar solo to give the punters what they want amidst a curtain of trees washed in multicoloured lights. A man leaving the stage after the show sums it up best when he says “if I die tonight, I’ll die a happy man.”

It should feel strange to be somewhere surrounded by thousands of people, singing and dancing at a busy festival after the past 18 months, but doesn’t at End of the Road. And though you’d be forgiven for feeling nervous before arriving – given the reports of spikes in infections at Reading and Leeds – most attendees are respectful. The layout and size of the festival (just under 12,000) also means a lack of space isn’t an issue.

Back on Friday afternoon at the Woods Stage, the weather is slightly overcast but warm. The Balimaya Project get punters going with their energetic West African jazz medley. At the same time, children are pulled around in carts, while couples embrace, and bearded blokes shuffle about with their mates. The crowd at End of the Road is a real mixed bag: families, older folk, couples in their mid-twenties, thirties and forties, and the odd group of young hipsters dressed in 90s clobber. The atmosphere is friendly, respectful and wholesome, with hardly a raised phone insight.

Blur’s iconic frontman Damon Albarn puts in a solid shift later on Friday evening, capped by a nostalgic performance of This is a Low – appealing to the Britpop enthusiasts in attendance. Hot Chip get the young’uns dancing later on with dance floor classics like Ready for the Floor and two covers: Bruce Springsteen’s “Dancing in the Dark” and Beastie Boys’ “Sabotage”.

What’s unique about this festival is its dedication to its independent label. Food vendors are small or small-ish businesses, from veggie and vegan Lebanese and Chinese trucks to festival classics like pizza, burgers and fish and chips. Most of which offer hearty portions for under a tenner. Beers and cider are reasonable too, from £5.50 for a pint of plant power and £10 for a cocktail.

End of the Road doesn’t have to be boozy either. There is loads to do for teetotallers aside from the music: morning yoga, literature, comedy and cinema. Although one small pet peeve was that the cinema set-up was underwhelming compared to everything else – nobody wants to sit on plastic chairs for two hours. That said, the festival’s organisers – who pulled the festival together in a matter of months – can be forgiven for this tiny niggle. The rest of the festival is beautifully curated, from the art and light installations in the wonderfully-named, enchanting Effing Forest to the disco ship in the woods and the lively Tipi next to the cider bus.

It’s just a blessing that the festival went ahead at all. End of the Road, like most other festivals, has been through the mill. Organisers had to change the lineup four times. Thankfully this one is still good despite being made up of mainly British talent. The performance of the festival on the main stage is split between Little Simz and King Krule. Simz gets perhaps the biggest cheers as she wheels effortlessly through tracks from her newest album ‘Sometimes I Maybe Introvert’.

On the final night, King Krule blows the lights out – quite literally – with a stirring one hour thirty minutes set. At one point, the lights go out to which he declares “music is better in the dark anyway”. Easy Easy goes down a storm, as does the subdued Baby Blue.

After fighting a pop-up tent into a bag that’s far too small, we look around at a largely clear field, but for scatterings of broken tents near bins and the odd empty beer can. It says a lot about this place, and it’s the clientele. We pass Ray for one final time, and he asks how we enjoyed the festival. “See you next year, Ray”, probably says it all.