Barbara Vorster, 57, was taking pictures in a game reserve in Botswana when the equipment fell to the ground 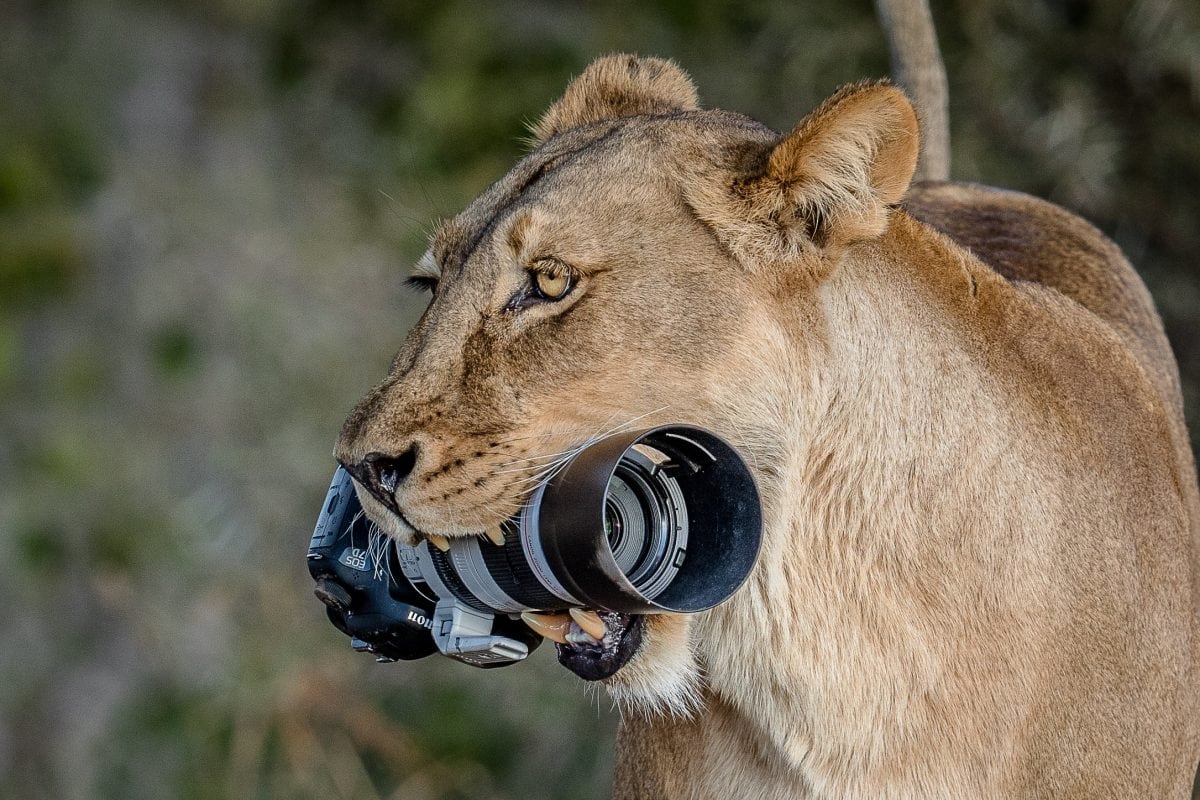 These funny pictures show a lioness snatch a photographer’s £2,000 camera after she dropped it in a game reserve.

Bush explorer Barbara Jensen Vorster, 57, was taking pictures of the pride from a 4×4 in the Mashatu Game Reserve in Botswana in July when the equipment fell to the ground.

Hearing the thud, a protective lioness jumped up and moved towards the vehicle, causing the exploration party to retreat.

The incredible pictures then show the mum pick up the camera in her mouth by its lens and prowl off – before giving it to some little cubs to play with. 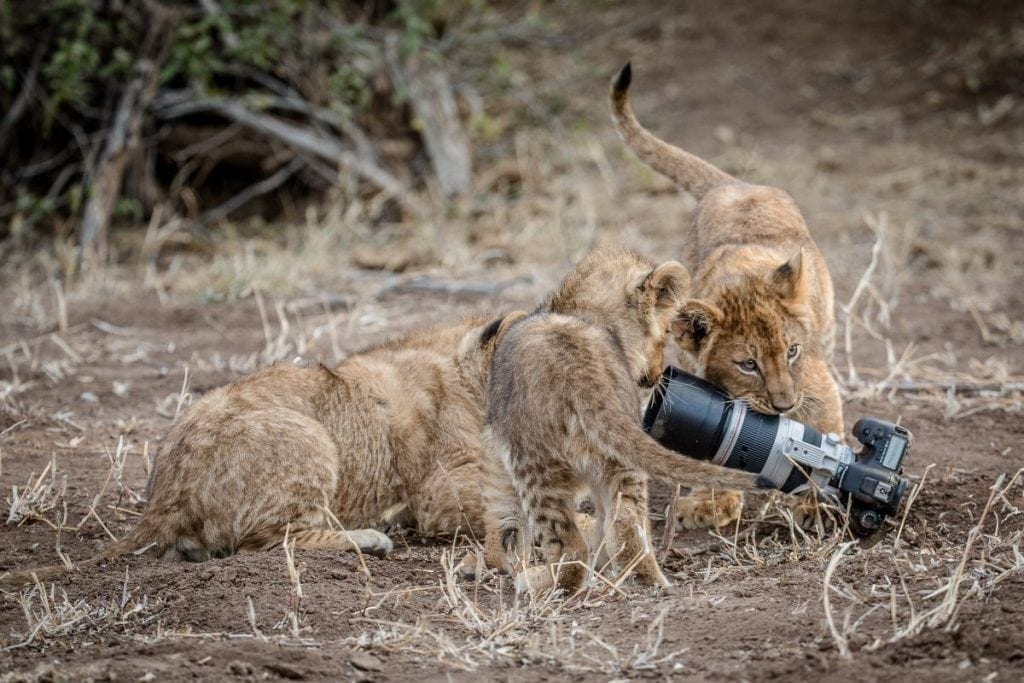 Barbara, 57, said : “We were at a lion sighting with two lionesses – the one had three cubs that were a bit older and the other had two very small cubs.

“I took a couple of still shots and then thought it was such a special scene that I should try and get some video footage.”

She set up her phone and started filming, then picked up her camera to take more pictures.

But from the corner of her eye she noticed the camera phone slipping from its tripod, and leaned to secure it. 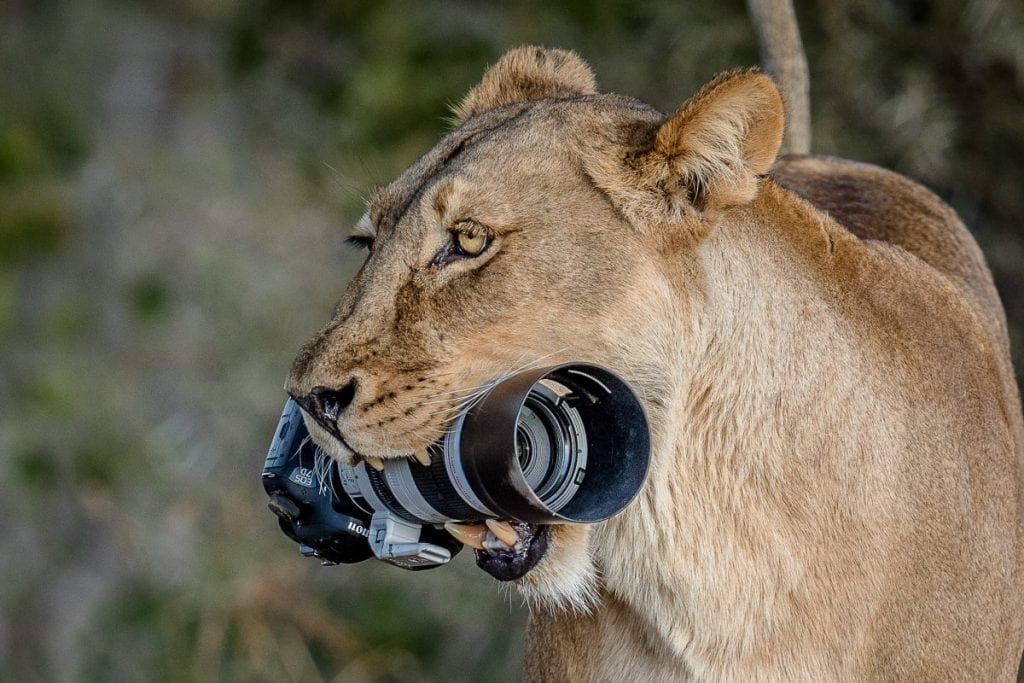 Barbara, from Johannesburg, South Africa said: “The camera slipped from my lap and fell on the ground.

“Normally these lionesses are very relaxed but as there were small cubs they were extra protective.

“As soon as the one lioness heard the thud, she looked up, growled and approached the vehicle. We had to reverse without attempting to retrieve it.

“The camera fell with the lens looking up, she gently flipped the camera on its side and picked it up by the barrel of the lens.”

Determined not to miss the unusual moment, Barbara grabbed her other camera and starting shooting. 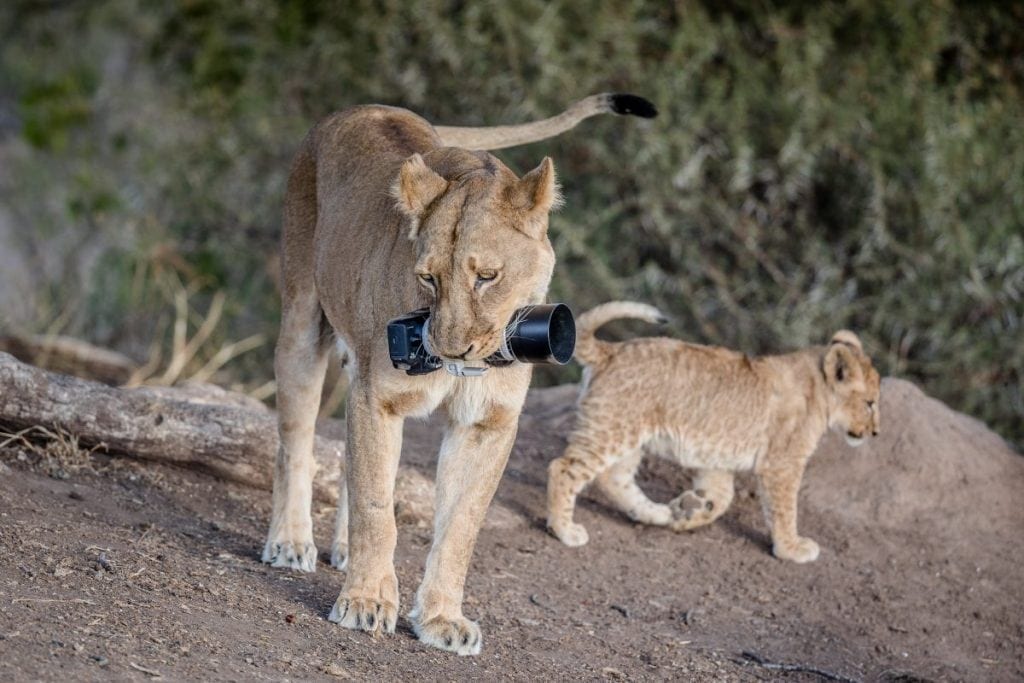 She said: “What can one do? Your other camera is in a lion’s mouth and you are presented with an unique photo opportunity.”

The communications manager added: “Her three cubs were quite intrigued with the strange thing in their mom’s mouth.

“She carried it for quite some way before she dropped it and the cubs pounced on it and started to play with it.

“They dragged it through the dirt, chewed on the lens hood and then fortunately, like most kids, soon grew tired with their new toy.”

The guide from another vehicle was then able to retrieve what she had dropped.

The nature lover has since had her camera fixed, which cost her around £200.

“What photographer can boast that their lens had been in a lion’s mouth?”