In 2019, acclaimed author and screenwriter Guenther Primig published the first in a series of anthologies that artfully combined the best of classic and contemporary horror. The Dark Book of Gwenna Luna: Six Dreams of the Supernatural wrapped its bone-chilling, atmosphere-drenched tales of terror within a wider narrative arc about a young witch’s attempts to escape a deeply-troubled past and become a force for good. The book became an instant bestseller as horror fans queued up to join the cult of Gwenna Luna. Appropriately enough, this was all made possible thanks to Primig finding a dream team of creatives who, together, formed independent publishing house Barksin. Now, to mark the hotly-anticipated sequel’s release, The Graveyard of Gwenna Luna: Six More Dreams from the Dark Book, we spook with Guenther Primig about the Gwenna Luna series, and where his creepy creation, and Barksin, will go from here. 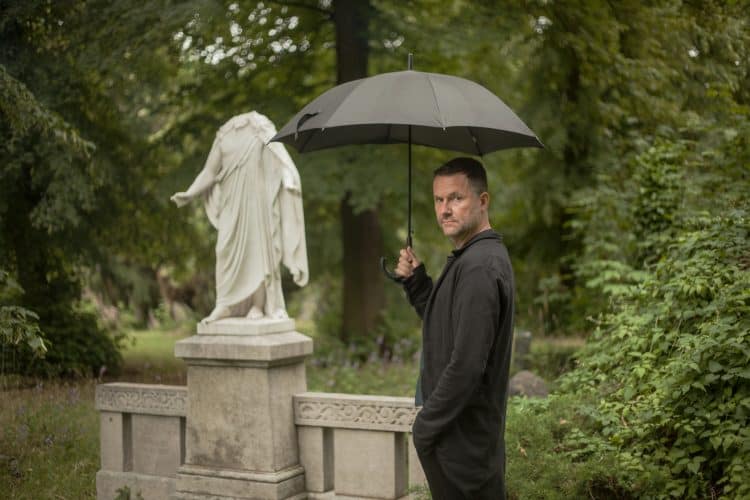 Q. How would you sum up the Gwenna Luna series to a new reader?

A. It’s a story that begins very much in the real world, with a young girl seeing a psychiatrist and claiming to be a witch. And as he engages with her, trying to help her, she begins to reveal a series of dark, strange dreams that happened to people: stories of horror and hauntings that come from the invisible fabric that surrounds the real world—the myths, the folk tales, the bones in our collective graveyard of the mind.

As the series progresses, we find out how these dreams relate to Gwenna’s life, and follow her as she flees through the world from the dark shadow trying to kill her: the terrible Red Witch, her mother.

It’s a long chase through a world of ghosts and magic and dangers, and it’s far from likely that Gwenna will stay ahead of the darkness.

Q. What keeps you motivated to produce high-quality horror books?

A. The short answer is that I love high-quality horror books. The whole project started with the most selfish of reasons: I wanted to write something I liked. If nobody else read it, it would still be that. Then, of course, once you start working on something, if it clicks you really have no choice in the matter. In the first book, The Dark Book of Gwenna Luna: Six Dreams of the Supernatural, Gwenna is a mysterious character, but in essence her story frames the individual horror tales.

But the more I thought about her, the more I was drawn in. So, her story took over the books, until by book three, which I’m currently working on, it’s a novella only about her. You might say at this point my motivation is that I have no choice but to see how her story comes out.

Q. The Gwenna Luna series stands out among the crowd of contemporary horror books, and for positive reasons. Can you explain your approach to the genre, and why this direction was the right one for you to go down?

A. If Gwenna stands out, I think it’s because the books are not about ideas but feelings. There are, I think, a lot of books in the genre that settle on a basic idea and then explore that idea or high concept in great detail: a town is full of werewolves; six friends killed someone 20 years ago and they’ve come back—that sort of thing. They make sure you understand precisely who haunts whom for what reason and that all timelines are correct. It’s an avoidance of vagueness that I find boring. I like vagueness. I’m not doing a how-to manual on the supernatural. I’m not interested in the mechanics of a ritual, for instance. I’m interested in the sensations of sitting in a dark room watching someone performing that ritual, that dread and fear. Hooray for vagueness!

Q. You are a horror fan yourself. What is the appeal of horror for you?

A. There are a lot of horror books I like, but I’m probably more a fan of folk myths and fairy tales. I certainly read a lot more of those than I do horror. I like their matter-of-fact acceptance of a spiritual side to the world. You walk into the woods and there is a tiny old man sitting on a mushroom telling you to answer three questions or be torn to pieces. Of course there is! Good horror stories all have that quality. They don’t deny the modern world, but they are aware that the modern world is surrounded by a fabric of spiritual reality that you ignore at your peril.

Q. The first Gwenna Luna book, The Dark Book of Gwenna Luna, was a bestseller. What do you think captured readers hearts and minds?

A. It’s certainly been fun to have people from such different places write and say they enjoyed it. To know that people from India, Australia or the Philippines were scared of Grollbein, a giant with a taste for children, or touched by the vampire story makes me think fear must be more universal than humour.

What did they respond to? I think Gwenna Luna’s world, for all the frightening parts, is a world you like to be in. The fog-shrouded inn; the ancient lake; snow-covered London … if the world is done right you want to go back to it. Why do I re-watch John Carpenter’s The Fog for the twentieth time? I know where all the jump-scares are at this point, but he caught that Northern California coastal atmosphere so brilliantly, you just want to be there again. A lot of ghost stories are like that.

Q. What can readers expect from its follow-up, The Graveyard of Gwenna Luna: Six More Dreams from the Dark Book, planned for release in the coming weeks?

A. Six more stories, of course—a monster in a swamp; a séance gone wrong; an unquiet graveyard … lots of fog and terror. But it’s also the book where Gwenna’s story begins to develop. We only had a brief glimpse of her in the first book—an introduction, really. With The Graveyard I think it becomes apparent that this will be a long, dark ride and it’s Gwenna we’re taking it with.

Q. Outside of the books you have plans to take the Gwenna Luna brand in many other exciting directions. What can you tell us?

A. Well, there is interest from a company in L.A. regarding a film adaptation of ‘The Valley Without Laughter’, the vampire story in the first book. So that would be fun. I’ve done a few film scripts in the past, and my writing is very cinematic, I think, in terms of locations, moods and action. In today’s media world, with horror anthology series being very successful, of course writing a series like this I’m not unaware that it would work very well as a four-season show. But I’m thinking of the books now. We’ve all seen what happened to Game of Thrones when they shot the last season without the books being finished. Talk about horror….

Q. The Gwenna Luna series is independently published by a team including one of your best and oldest friends. How did this all come about and what has the experience been thus far?

A. It’s been wonderful. Maybe because both Nadir, who is the producer of the books, and I are non-confrontational Pisces. Harmony! And we pooled our connections to very talented professionals—there is not a single person involved that either Nadir or I haven’t worked with before on some project. That was the original idea: to see if we could, that way, produce a series to the highest professional standard but outside the industry. If the distribution channels exist, if technology allows you to get your book to readers all over the world, then it’s really about the quality of the work, and I don’t mean just the writing but everything from editing and layout to design, artwork and the recording of an audiobook. It gives you complete control of the series. So, sink or swim, at least you get to do what you want. So far, knock on wood, we’re swimming.

Q. The Gwenna Luna series is also being supported by accompanying audiobooks. Can you tell us why these should be on our playlist?

A. We were really lucky to get Kristin Bush to record the audio book. She’s a wonderful actor, of course—theatre in New York, Chicago, movies like Paterno, Liberal Arts, Slumber, series like Law & Order, Elementary. Her voice can do anything. She brings this darkish timbre to Gwenna that just makes me feel like Halloween; a great ghost story voice. My favourite part is the climax of ‘The Valley Without Laughter’, the vampire story. I love what she did there: “Revenge”. I just play that part over and over.

The Graveyard of Gwenna Luna: Six More Dreams from the Dark Book by Guenther Primig is published Barksin and is available now on Amazon, priced £7.28 in paperback, and £4.36 as an eBook. The Dark Book of Gwenna Luna: Six Dreams of the Supernatural is also available on Amazon, priced £7.28 in paperback, £2.30 as an eBook, and £12.07 as an audiobook. For more information visit www.GwennaLuna.com or follow Barksin on Instagram at @gwennaluna.