From Harrison Ford and Oliver Reed to George Lucas, Jeremy Clarkson, Simon Cowell and Martin Scorsese, British TV producer and writer Ian Brown has worked with them all.For across a distinguished career spanning three decades, Ian has been the driving force behind some of Britain’s best-loved shows including This Is Your Life and Top Gear.More recently, Ian has become celebrated as a children’s picture book author, both with the Albert the Tortoise series and the new Hugg ‘n’ Bugg series. But like his pet tortoise, the journey to publication has not been swift—in fact, it has taken him 30 years to achieve his dream, and what he views as his greatest professional achievement. 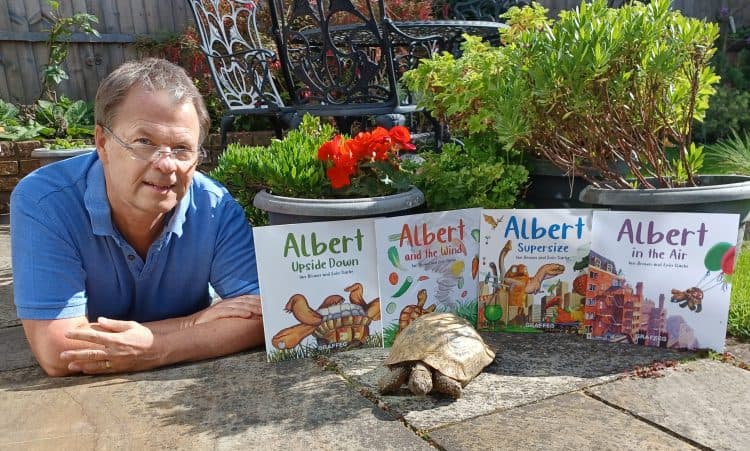 For nearly two decades, Ian Brown worked on This Is Your Life, one of the UK’s most popular TV shows of all time.

As a writer, and later producer, for the hit show, he was instrumental in delivering the ‘big red book’ to hundreds of celebrities, both in the UK and on the other side of the pond, in Hollywood.

Getting all the guests together in time to celebrate each week’s subject was a tremendous challenge, but it came with the opportunity to rub shoulders with a who’s who of stars, from former James Bond Pierce Brosnan, iconic action hero Harrison Ford and famed hellraiser Oliver Reed to legendary actor James Stewart, Oscar award-winning film director Martin Scorsese and Star Wars creator George Lucas.

And it also gave him the unrivalled chance to write for the biggest names in show business, including none other than Springfield’s finest citizen, Homer Simpson, who made an animated appearance on a special This Is Your Life episode honouring music mogul Simon Cowell.

However, throughout this time, Ian secretly hoped that he would be able to deliver a different type of book … his own.

For ever since his earliest years, he had held aspirations to become a published author and between filming projects, be it for the latest season of This Is Your Life or other cherished TV institutions such as The South Bank Show and Top Gear, he would be busy preparing and submitting to literary agents and publishers.

There was never any doubt about his writing skills, which were first recognised while still at primary school, when he enjoyed the sweet taste of success in a writing contest sponsored by Cadburys, and were honed when he entered his first profession, journalism, after completing his A levels.

But despite vast experience both of Fleet Street and broadcasting, and try as he might, Ian soon became accustomed to receiving the generic rejection letters that all authors dread.

Still, he never gave up and, finally, his literary break finally arrived in 2020 when one publishing company, the award-winning Welsh publisher Graffeg Limited, opened their doors to his proposed series of children’s picture books.

All in all, it had taken Ian almost three decades to achieve this personal goal, and ultimately he has had the most unusual of muses to thank—his pet tortoise.

His series of Albert the Tortoise books, which now comprises four titles with the release of Albert in the Air this month, has proven immensely popular with readers of all ages, and it all began five years ago when Ian was sitting in his garden one day observing the real-life Albert navigating a rock.

“For 30 years or more I was trying to get published,” explains Ian. “I’d always wanted to be a writer and between my TV work I produced novels, children’s books, chapter books and picture books, but they were all rejected by publishers and agents.

“About five years ago I was inspired to write a new book based on the exploits of our pet tortoise, Albert.

“I was watching him climb a rock when he overbalanced and tipped on to his shell. I wondered what might happen if I wasn’t around to gently put him the right way round again.

“What if, instead, all the other garden animals had to overcome their differences and band together, using teamwork to help a tortoise in need!

“I pitched it all over and, of course, got lots of rejections, but then I saw that Welsh publisher Graffeg had won an award for one of their books, Gaspard the Fox by Zeb Soanes and James Mayhew based on a real urban fox, and I thought, real fox, real tortoise, and decided to reach out.”

The first Albert book, Albert Upside Down, was published in March last year, during lockdown, and was an instant hit with young children aged three to seven, their parents, and tortoise fanatics, surprisingly of which there are many.

Since then, Albert’s escapades have continued with Albert and the Wind, where his food blows away and it is up to the garden animals to return it, and Albert Supersize, where he dreams of being a dinosaur like his ancient ancestors.

The gentle comedy of the stories, a signature of Ian’s writing, combined with the vibrant and expressive colour illustrations of acclaimed animation director Eoin Clarke, with whom Ian first worked on his cult adult cartoon show The Bruvs, has won the hearts and minds of readers and critics alike.

And, fittingly given the author’s dogged determination to become an author, the books share important moral teachings about perseverance and resilience, as well as kindness and teamwork.

This resolve has been with Ian across his life, and indeed helped him get him his big break in television.

“I had decided to go into journalism as I’d been advised that this was a good route into television,” he reveals.

“From there, I had worked myself up from a local reporter for the Herts Advertiser to getting shifts in Fleet Street, on national newspapers such as The Sun and Sunday Express.

“On and off I was trying for five years to break into TV and got odd freelance jobs with Thames News and current affairs shows at London Weekend Television (LWT).

“I then applied to Thames TV to work as a researcher on This Is Your Life, did the interview but was rejected. The thing was, I knew I would be perfect so I wrote a cheeky letter back saying, in no uncertain terms, that they were wrong!

“By chance, someone they were preparing to take on internally had not worked out and they called me in to start on a three-month trial. I ended up working on the show for nearly 20 years on and off, becoming a researcher, then writer and programme associate.

“As I try to convey in my children’s picture books, it just goes to show that determination can pay off in the end.”

And with Albert the Tortoise now firmly established as a literary institution, and the real-life Albert something of a celebrity in his own right with huge followings on social media, Ian is now launching a second series of comical children’s picture books, this time featuring a most unusual double-act: a yeti and mountain flea.

The new series kicks off with Hugg ‘n’ Bugg Finding Home, which is published through Graffeg on 27th October and will once again feature illustrations by Eoin Clarke.

It tells the story of how little flea Bugg becomes best friends with Hugg the yeti after searching for somewhere to shelter from the biting cold.

Ian, who has further Hugg ‘n’ Bugg and Albert the Tortoise books coming out next year, continues: “Hugg ‘n’ Bugg  stems from when I was eight years old and was tasked by my English teacher, a big fan of The Goons and Monty Python, to write something whacky about ‘The Himalayan Flea’. “The idea stayed with me and took on many forms over the years until I honed it as a rhyming book.

“Of course, I received multiple rejections from agents and publishers, being told there was no market for rhyming books but I believed in it and it’s lovely to see my publisher, Graffeg, once again showing faith.

“It’s also a delight to be working with Eoin on this new series. He’s super-talented and has created great characters. Hopefully people will take to them as they have for Albert.”

Both Albert in the Air and Hugg ‘n’ Bugg Finding Home by Ian Brown & Eoin Clarke are published by Graffeg Limited. Albert in the Air is out now while Hugg ‘n’ Bugg Finding Home is released on 27th October 2022. Both are available in paperback, eBook and animated eBook formats, priced £7.99 and £3.99 respectively. For more information about author Ian Brown and his books, visit www.alberttortoise.com. You can follow Albert the Tortoise on Facebook, Twitter, or TikTok. You can also follow Hugg ‘n’ Bugg on Facebook, while Ian Brown can be found on Facebook, Twitter or Instagram.