“Shame I didn’t still own it" said the artist. 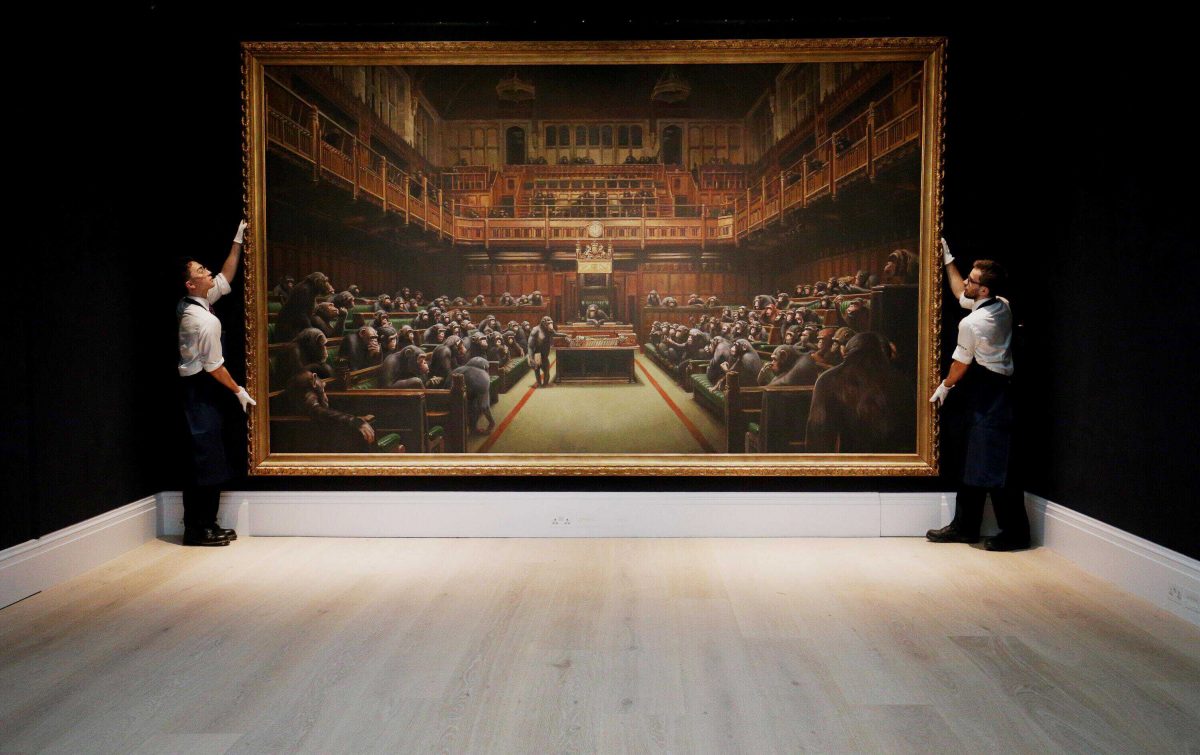 A Banksy artwork depicting MPs in the House of Commons as chimpanzees has been sold for almost £9.9 million, in what organisers say is a record for the street artist.

Devolved Parliament, which is four metres wide, was first unveiled as part of the Bristol artist’s exhibition Banksy vs Bristol Museum in 2009.

Shortly after Devolved Parliament was sold, Banksy reacted on Instagram.

“Record price for a Banksy painting set at auction tonight,” he wrote.

“Shame I didn’t still own it” the artist said, posting a quote on Instagram by the art critic Robert Hughes.

“Art should make us feel more clearly and more intelligently,” the quote said. “But the price of a work of art is now part of its function, its new job to sit on the wall and get more expensive.”

That comfortably beats the previous auction record for a Banksy – the 1.9 million US dollars (£1.54 million) paid for Keep It Spotless, which was sold at Sotheby’s in New York.

In a statement after the record sale, Sotheby’s said: “More than 10 determined bidders competed for the work over the course of a 13-minute battle, quintupling the pre-sale high estimate.”

“Laugh now, but one day no-one will be in charge.”

“Bristol museum have just put it back on display to mark Brexit day.”

His post ended with the quote: “Laugh now, but one day no-one will be in charge.”

Chimpanzees first appeared in Banksy’s work in 2002, with his piece Laugh Now.

The painting shows a row of apes wearing aprons carrying the inscription “Laugh now, but one day we’ll be in charge”.

In 2009, Banksy said of Devolved Parliament: “You paint 100 chimpanzees and they still call you a guerrilla artist.”

Alec Branczik, European head of contemporary art at Sotheby’s, said: “Regardless of where you sit in the Brexit debate, there’s no doubt that this work is more pertinent now than it has ever been, capturing unprecedented levels of political chaos and confirming Banksy as the satirical polemicist of our time.”

It stands at 13 feet across, making it the artist’s largest known canvas.

Devolved Parliament was only the joint most expensive painting sold by Sotheby’s on Thursday, however.

Thursday’s auction took place almost a year after Banksy’s Girl With The Balloon partially shredded itself as the gavel came down at Sotheby’s, becoming the freshly titled Love Is In The Bin. It sold for one million US dollars.