The graffiti artist said the card company is contesting the trademark he holds to his art. 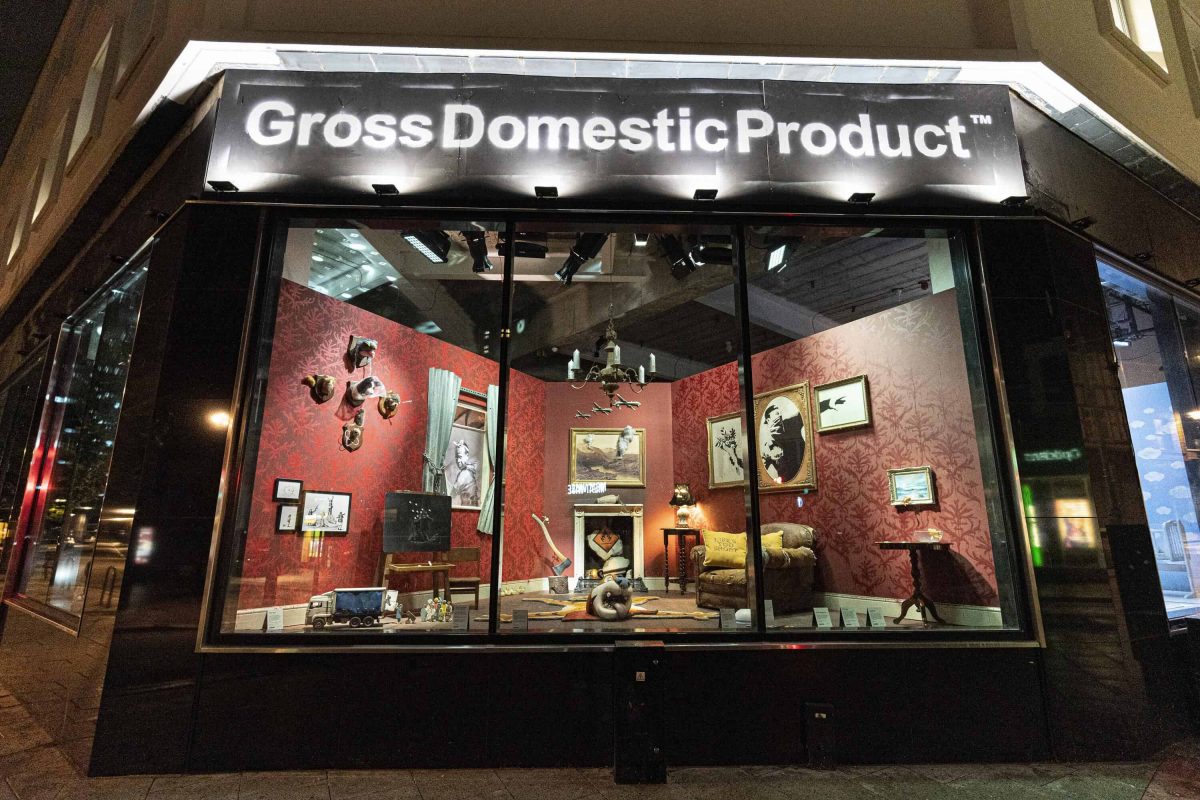 Graffiti artist Banksy says he has been forced to open his own homeware store following a legal dispute involving a greeting cards company.

The new store, called Gross Domestic Product, will span the windows of a former south London carpet shop and sell a range of “impractical and offensive” merchandise created by the artist.

In a statement, Banksy said the motivation behind the venture, on Church Street in Croydon, is “possibly the least poetic reason to ever make some art”.

He said: “A greetings cards company is contesting the trademark I hold to my art, and attempting to take custody of my name so they can sell their fake Banksy merchandise legally.

“I think they’re banking on the idea I won’t show up in court to defend myself.”

Items being sold in the shop include a Union Jack stab-proof vest, worn by the rapper Stormzy during his Glastonbury performance, and a model of Frosties cereal character Tony the Tiger, re-imagined as a rug.

Welcome mats made from life vests salvaged from the shores of the Mediterranean, which have been hand-stitched by women in detainment camps in Greece, are also on display.

Mark Stephens, an arts lawyer and founder of the Design and Artists Copyright Society, is advising Banksy on what he describes as “frankly ludicrous litigation”.

He said: “Banksy is in a difficult position because he doesn’t produce his own range of shoddy merchandise and the law is quite clear – if the trademark holder is not using the mark, then it can be transferred to someone who will.”

As a solution to the issue, Mr Stephens proposed that Bansky began his own range of merchandise and opened a shop.

Mr Stephens said the card company, who he refused to name, initiated the legal proceedings about 12 months ago. View this post on Instagram

. This showroom is for display purposes only. I’m opening a shop today (although the doors don’t actually open). It’s in Croydon. Probably best viewed at night.

Although people will be able to visit the store for the next two weeks, its doors will never open and the lights will remain on 24 hours a day.

Banksy said: “The proceeds from these products will go towards buying a new migrant rescue boat to replace the one confiscated by Italian authorities.

“So you may well be committing a criminal offence by purchasing them.

“Sometimes you go to work and it’s hard to know what to paint, but for the past few months I’ve been making stuff for the sole purpose of fulfilling trademark categories under EU law. It’s not a very sexy muse.”

Other items for sale include disco balls made from used police riot helmets and a toddler’s counting toy where children are encouraged to load wooden migrant figures inside a haulage truck.

Items on display in the shop, which are only available to buy online, range in price from a £10 signed spray paint can to a handbag made from a house brick.

Banksy said despite trying to defend his artistic rights in this particular case, he has not changed his position on copyright.

He added: “I still encourage anyone to copy, borrow, steal and amend my art for amusement, academic research or activism. I just don’t want them to get sole custody of my name.”

Amongst the crowds gathered outside the shop on Tuesday was Janet Jones, 62, who lives locally.

She said: “It’s pretty incredible. The shop has been empty for a long while.

“I’m pretty sure it was empty yesterday, It’s just happened so quickly.”

Four security guards, dressed in brown trench coats, were stood outside the store.

They told PA news agency that they did not know who they were working for or how long the job would last.

“It just popped up overnight. That’s one of the great things about street art, it’s something for everyone to enjoy.”