Coronavirus has seen some firms show their true colours. 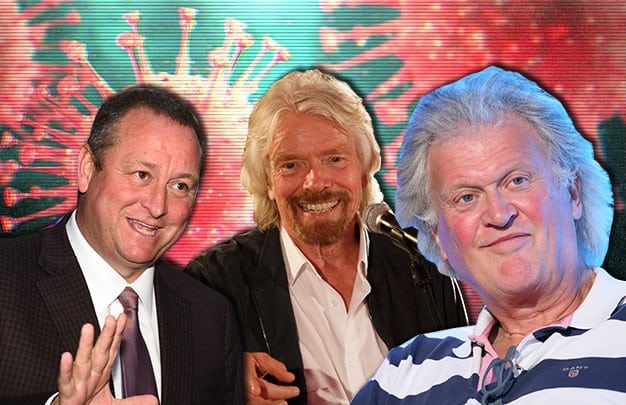 Coronavirus has created heroes and zeros in the business community.

While many firms have rightly been credited for stepping in to protect their staff, aid community projects and support NHS workers, others seem to have abandoned their moral compass altogether.

Several businesses, most of whom have extremely wealthy bosses and large cash reserves, have shown their true colours as the proverbial excrement hits the fan.

In response consumers have been urged to boycott them when the crisis has passed.

We take a look at the main culprits.

A call to boycott Wetherspoons was put out on social media yesterday after the pub chain’s founder, Tim Martin, announced to staff that he will pay them until the pubs last opened, but there will be no further payments until the Government fulfils its promise to cover 80 per cent of the wages of workers affected.

There was uproar from industry spokespeople after the pub chain said it did not intend to pay its suppliers until pubs reopen.

LATEST: Martin has agreed to pay workers up to 80 per cent of their wages while the company’s bars remain closed.

It is also understood that they have reversed the decision to pay suppliers.

Sports Direct employees said they felt their lives were being “undervalued” after the store announced they would still be made to work despite stores being closed to the public.

Andrew Neil said he suspects Britannia Hotels will be added to the list of businesses people will not be frequenting after the crisis when Aviemore Coylumbridge Hotel ruthlessly kicked staff out of live-in accommodation, telling them their services are “no longer required“.

LATEST: The hotel has since reversed the decision, blaming an ‘administrative error’ for sacking staff during the pandemic.

LATEST: Sir Richard has said he will invest £215 million into his Virgin empire to help protect jobs, saying “our people have and, will always be, my number one priority”.

Staff at Virgin Atlantic and EasyJet have also been invited to volunteer at NHS Nightingale and the new hospitals planned in Birmingham and Manchester.

Their salaries will continue to be paid by the airlines.

EasyJet made the perverse decision to appeal for taxpayer support last week despite handing shareholders £174 million in dividends.

Staff at Wren Kitchens have been left without a wage amid the coronavirus pandemic after the firm laid off hundreds of workers across the country.

According to reports they were read a specially crafted “Covid-19” script in which they were told after a “review of their performance” that the decision had been made to “terminate employment”.

Factory staff that have been kept on say they are in “fear for their life” as they were told to go to work as normal despite a government shutdown.

Cineworld and Picturehouse made mass redundancies last week and cut pay for all retained staff by 60 per cent.

The devastating decision left many employees wondering how they will afford essentials such as housing, electricity, gas and food in the coming weeks and months.

LATEST: Following the chancellor’s announcement Cineworld and Picturehouse said they will continue to pay employees who are unable to work while cinemas are closed as well as keeping their jobs for the future.

They said: “The well-being of our employees has always been a top priority for Cineworld and Picturehouse and we will continue to support them as much as possible”.

Leaked emails from Next HQ show staff are being told to take unpaid leave or use holiday days if they’re worried about coronavirus.

Workers are being docked pay if they turn up late due to transport disruption. Staff in warehouses say the company is “putting lives at risk” as social distancing rules aren’t being followed, with 50 people stood together brushing shoulders according to one employee.

Hotel chain Travelodge was criticised this week after it closed a number of hotels being used to house homeless and vulnerable people, leaving some fearing they would have nowhere to go.

It said it was acting in line with government coronavirus guidance, but on Tuesday the Ministry of Housing said:

“All hotels, hostels, and B&Bs providing rooms to support people who are homeless through arrangements with local authorities and other public bodies should remain open and are not affected by the guidance issued yesterday.”

A petition has been set up online following reports that Wickes are forcing staff to come into store to service click and collect orders and deliveries in spite of government guidelines.

One anonymous source told The London Economic that staff are being forced to either turn up to work or “not get paid”, with some being told to cancel holidays later in the year or take unpaid leave if they want to follow the government’s advice.

Staff at home retail store The Range claim they are being forced into work despite the government ordering stores to close.

According to one source they have been told they will receive no pay if they want to isolate with little been done to enforce social distancing and ensure the safety of staff in work.

Although this is undoubtedly a tough period for the aviation industry, the Flight Centre has been roundly criticised for its handling of the crisis after it laid off thousands of workers world-wide.

According to one anonymous source, every employee who has worked for the company for under six months received an email last week with a link to a conference call which was to begin immediately.

They were all subsequently released from their roles and instantly kicked off the systems they were working at home on.

They were placed on a ‘talent list’ for future recruitment but most were left with zero income for the foreseeable future.

LATEST: On Tuesday 31 March, Flight Centre was able to rehire staff members in order to furlough them on the government scheme, ensuring they have financial support and peace of mind that they will have a job to come back to after this global crisis is over.

The Abu Dhabi-based owners of London’s EcCel centre have sparked outrage after it was revealed they are charging the NHS between £2-£3 million a month for them to use it as a hospital to treat coronavirus patients.

The NEC in Birmingham, on the other hand, has not charged the NHS for using its facility.

Its owner’s head of European Private Equity, Lionel Assant, said: “Like the rest of the country, we want to help in any way we can during this crisis.”

LATEST: It has been reported that the ExCel owners are now backing down and will provide the Hospital to the NHS for free.

Stonegate Pubs joins the list as the first UK company relying on government funds despite being based in a tax haven.

The pub chain, which owns Slug & Lettuce, Walkabout and Yates, furloughed 16,500 members of its staff even though it is being based in the Cayman Islands.