The proposals would create a global minimum corporation tax rate of 21 per cent that would apply in all countries. 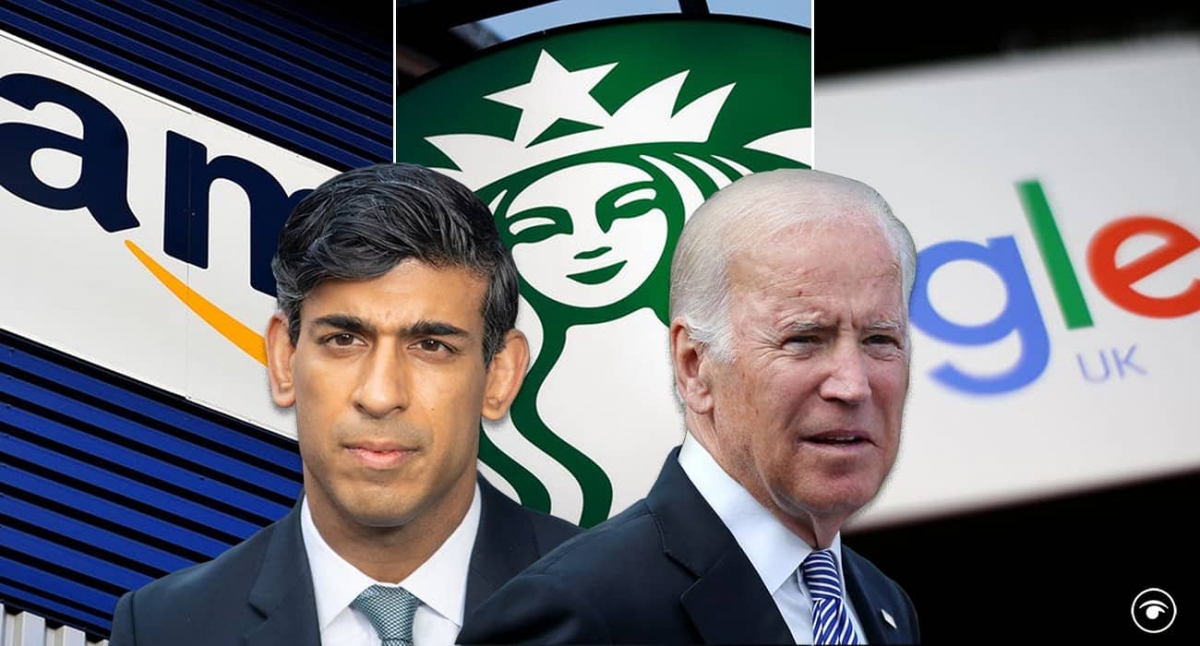 However, while other finance ministers have expressed support for the plan Rishi Sunak has remained silent, prompting criticism from tax justice campaigners.

The ‘Made in America Tax Plan’ would create a global minimum corporation tax rate of 21 per cent that would apply in all countries, ending the practice of ‘profit-sharing’ where multinationals like Amazon and Starbucks register their profits in countries with very low rates of corporate taxation.

The total loss to national government coffers caused by corporate ‘profit-sharing’ is estimated to be almost £180 billion each year.

The plan to create a global tax floor would also act as a corrective to the global race to the bottom that has seen the average corporate tax rate fall from 49 per cent to 23 per cent between 1985 and 2020.

Competition between jurisdictions to cut corporate taxes in order to stimulate foreign investment, allowing firms to increase profit margins at the expense of publicly funded services across the world.

The plan to crack down on tax avoidance has been welcome by top European government officials. The German finance minister has praised the plan as a ‘decisive step’, while the French finance minister said that ‘a historic accord is in reach.’ Mario Draghi, the Italian Prime-minister has said that he is “fully behind the call for a global minimum corporation tax.”

The response from the UK government has been notably muted. Treasury officials have reiterated their desire for tech giants to pay more tax in the UK, but there was no sign of support for the creation of a global minimum tax rate.

The shadow chancellor Anneliese Dodds has urged the government to publicly back the scheme, saying that “it’s important that our government moves to play its part” in the reform. Chief executive of the Fair Tax Mark advocacy group, Paul Monaghan, also criticised the government’s tepid reply to the plan.

“The UK’s response to Biden’s radical tax justice proposals is still lukewarm at best. UK are talking about targeting digital revenue more (which is good) but nothing on targeting non-digital revenues or supporting a substantive global minimum corporate tax.”

Analysis conducted by Tax Justice UK suggests that the implementation of the global minimum tax rate would raise an extra £13.5 billion in revenue for the British exchequer each year. This sum would be enough to pay the salary of over 4,000 nurses. Robert Palmer, the chief executive of Tax Justice UK has called on the government to back corporate tax reform.

“The public is fed up with major companies getting away with paying ultra-low rates of tax. A new minimum corporate tax rate would bring in billions of pounds to support public services and would deal a blow to tax dodging…The government should stand up and support these proposals the UK and its tax haven network have long promoted a global race to the bottom on corporate taxes- this needs to end.”

The failure of the British government to openly support the US global tax plan has drawn scrutiny to the UK’s central role in the “axis of tax avoidance.”

Indeed, the UK, together with its web of Overseas Territories and Crown dependencies, is responsible for around 37 per cent of all corporate and income tax avoidance.

This complicity in tax avoidance costs the rest of the world over £110 billion in missing tax revenue every year, or roughly 1000 per cent the UK’s entire foreign aid budget for 2021.

Finance ministers of the G20 economies expect to reach an agreement on global tax reforms at their next meeting in July 2021. The role that the UK government will play in these talks remains to be seen.