Thanks to the Internet, the way that we work has changed dramatically. In addition to connecting colleagues around the world and eroding the barriers between consumers and information, the Internet has enabled a whole new class of service work: the “gig economy.” For a relevant example, consider a London takeaway spot. Food that was once […] 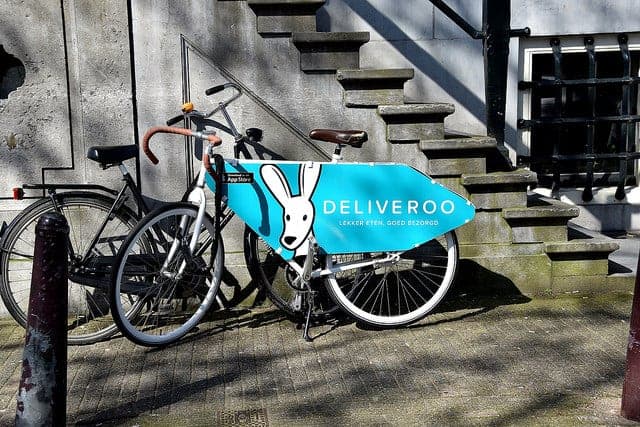 Thanks to the Internet, the way that we work has changed dramatically. In addition to connecting colleagues around the world and eroding the barriers between consumers and information, the Internet has enabled a whole new class of service work: the “gig economy.”

For a relevant example, consider a London takeaway spot. Food that was once delivered by a full-time courier is now sent on the back of a part-time, freelance bike messenger who works for another company entirely. You might have even ordered your food through a platform, cutting out the often-unintelligible phone conversation and submitting your order online. We are all working together, unintentionally, to create a new, Internet-powered economy. And this economy is underwritten by a new kind of labour: cheap, flexible, and broadly available.

This new kind of work has begun to take over London. With more and more citizens working for platform-based companies like Uber, TaskRabbit, Deliveroo, and Hermes, it’s time to ask if the gig economy is good for London.

The gig economy deserves some credit for introducing new methods of work to the masses. By allowing people to take up temporary, informal work on an on-going basis, it’s expanded the earning potential of many people. It’s especially useful for students and those with full-time work already occupying their schedule. Clock-in at your leisure and clock out when you’re ready to stop: that’s the world that gig work envisions. And, in a large way, that’s the world it’s delivered. And according to the United Kingdom Office of National Statistics, “self-employed workers are broadly content with their labour market status.” Unfortunately, it’s not quite as utopian as all that.

“Even after controlling for income, having a short-term, temporary contract is associated with significantly lower wellbeing,” says Stephen Devlin, senior economist at the New Economics Foundation. “Working long hours is associated with substantially higher incidence of tension, stress and worry.”

Because gig work exists outside the bounds of formal employment, gig workers frequently exist outside the bounds of formal labour laws. Fortunately, recent rulings have begun to change this for some gig workers. In a landmark case before a London employment tribunal, it was ruled that Uber drivers are workers, not independent contractors. As such, Uber’s drivers are entitled to labour protections. The US-based firm was ordered to pay drivers the National Minimum Wage, as well as provide holiday pay and sick benefits.

And it might just be the beginning: Frank Ryan, an employment lawyer at Vardags, was quoted as saying the ruling is a “green light for others in the gig economy to come forward and make similar claims.” The ruling itself slammed Uber, calling the idea that 30,000 drivers are “small businesses” operating through Uber’s platform “pure fiction with bears no relation to the real dealings…between the parties.”

But that was a year ago, and many gig workers still work without the standard labour protections expected by other working men and women of London. A recent survey by the Resolution Foundation discovered that most self employed workers (the class that most gig workers come under) make less than the minimum wage.

This classification does cover a broad class of workers – 1 in 7 UK residents, according to the Resolution Foundation. And it contains many for which the minimum wage would not be appropriate, like entrepreneurs, freelancers and and legitimate small business owners. All of these people made a willing compromise: the would trade the certainty of work for the power to set their own wages based on their success.

But it also covers those that work for platforms that prohibit setting their own prices. Because these workers are limited by the platform they work under, they lack the freedom of other self-employed workers while suffering the same consequences. All of the risk, but none of the reward.

Yet as wages for gig workers are dropping, growth is picking up. The same data also shows that self-employment earnings fell by 32 percent between 2007 and 2014, while the number of self employed workers rose by more than 1 million between 2001 and 2015. The New Economics Foundation, and economic think tank, found that the gig economy in particular has grown by 72 percent since 2010. At the same time that self employment underwrites London’s many Internet-based delivery, transportation and service companies, wages are in freefall.

The economic impact of this kind of work can spell trouble in turn. Lower wages mean less economic activity of course, but that kind of first-order effect isn’t even the most significant. Problems truly emerge when we imagine the problem on a massive scale. Erosion of collective bargaining power, like we see in gig work, can lead to a downward economic spiral for the entire economy. As workers lose standing with their employers, they have less bargaining power, and less power to get favorable working conditions. A lack of job security leads to significant working stress, which is not only unhealthy for individuals. Long-term, chronic stress can lead to health conditions that shorten lives and cost money to treat.

“The gig economy can present great opportunities for the underemployed,” says Peter Marek of Invoice Home, an invoice template company that works with freelancers and gig workers. “But it also requires a very specific attitude to survive. It requires the tenacity that drives entrepreneurs, but rarely offers the same rewards for success.”

Laws are trying to catch up, but so far they’ve been outpaced by a rapidly evolving economic ecosystem. “From employment regulations to tax and welfare rules, to public service operating hours, much is still premised on traditional employment,” writes Matthew Taylor, the chief executive of the RSA and a former Downing Street adviser to Tony Blair. “The government has to think hard about the difference it can make not just by changing laws but by shaping expectations, promoting dialogue and encouraging innovation.”

From a micro perspective, the gig economy might be good for individuals. It might give someone the power to pay off their credit card bills, get a nicer car or afford a vacation. It provides freedom and flexibility, and it’s a useful short-term option for those between full-time work. But forcing citizens to work without the labour protections that the rest of the UK’s full-time workforce takes for granted does little good for London, or for society as a whole.