"This latest incident ought, in theory, to lead to better treatment of disabled passengers and those with restricted mobility. But, historically their needs do not appear to have been a high priority at many British airports." 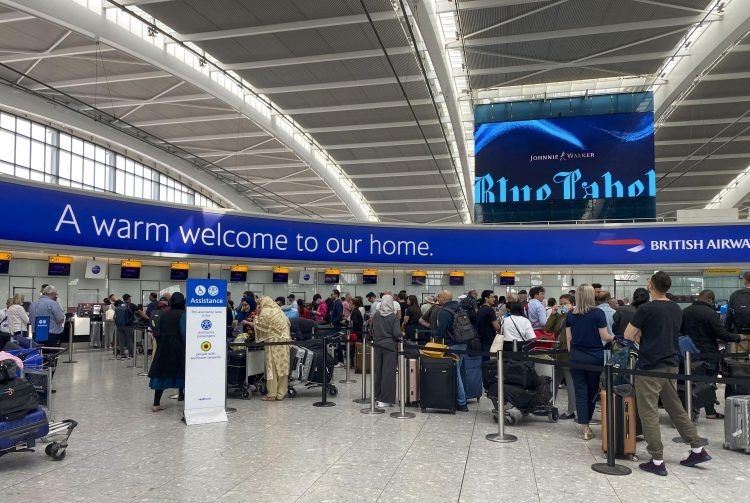 Some staff could work longer hours if they wanted to as a way to help out with current airport chaos, a business minister has said.

It comes as a passenger with restricted mobility has died at Gatwick Airport after leaving an aircraft.

Gatwick said staff were helping to disembark three passengers with restricted mobility at the time, including the man’s partner.

He decided to leave the EasyJet plane rather than wait for staff to return and fell while going up an escalator, an airport spokesman said.

Airline passengers have been hit by disruption for several months, with the situation worsening due to the rise in demand sparked by the half-term school holiday and the four-day Platinum Jubilee weekend.

The aviation industry is suffering from staff shortages after letting thousands of people go during the coronavirus pandemic.

Business minister Paul Scully told Sky News there are 1.3 million vacancies across the country in various sectors but there are also “people who have recalibrated what they want to do when they were on furlough”.

His comments come as London’s Gatwick Airport is reducing the number of daily flights during its busy summer period to help tackle staffing issues.

The airport is planning to limit its number of daily flights to 825 in July and 850 in August compared to a reported 900 daily flights during the same time period in previous years.

It said the decision was taken following a review of its operations and that it is “temporarily moderating its rate of growth” for two months to help passengers “experience a more reliable and better standard of service”.

Mr Scully told Sky News: “We want to make sure that those people that are not necessarily working full time, through Universal Credit we can get them back in to work to be more productive, if that suits them, and obviously match them up with the sectors where there are those vacancies.”

When asked whether this meant people working longer hours, he said: “I’m not talking about going out forcing people to do anything, but we just want to make sure that they’re matched up properly so that it’s just that those people who can work longer – that want to work longer – can do.”

Gatwick says the reduction allows airlines to manage more predictable timetables and help the ground handling companies during the school holidays, adding that the vast majority of scheduled flights this summer will operate as normal.

Its airport review found that a number of companies based at Gatwick are continuing to operate with a severe lack of staff resources over the summer holiday period.

The airport warned that if the issue was not addressed, passengers could experience queues, delays and cancellations.

It comes after a busy Jubilee holiday week, which saw more than 150 flights being cancelled across the UK on the eve of the Jubilee.

Gatwick said it operated around 800 flights a day during the Jubilee week.

Chief executive of Gatwick Airport Stewart Wingate said the venue had “prepared well” for the restart of international travel by successfully reopening the South Terminal.

It also has 400 new recruits to help process passengers quickly through security this summer.

He said: “We are also working closely with our airlines to avoid disruption to passengers this summer, and while more newly recruited staff will start work in coming weeks, we know it will be a busy summer.

“However, it is clear that during the Jubilee week a number of companies operating at the airport struggled in particular, because of staff shortages. By taking decisive action now, we aim to help the ground handlers – and also our airlines – to better match their flying programmes with their available resources.

“As has already been the case, the vast majority of flights over the summer will operate as normal, and the steps taken today mean that our passengers can expect a more reliable and better standard of service, while also improving conditions for staff working at the airport.”