“These re-announced half-measures will do little to clear the huge delays in security checks and tackle the chronic low pay holding the industry back.” 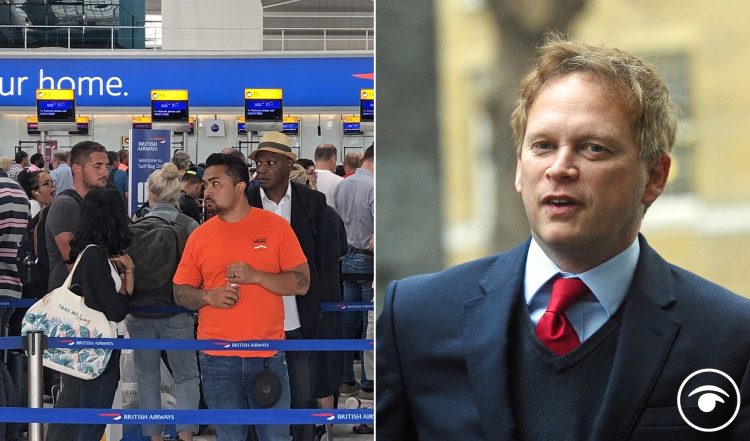 Ministers battling to dampen the chaos at airports claim security tests for new workers are being completed in record times as passengers criticised “disaster movie” scenes.

Transport Secretary Grant Shapps is trying to alleviate flight disruption this summer to avert the mayhem seen over the Easter and Jubilee holidays.

Shortages of staff to handle baggage and carry out security checks such as X-rays are fuelling long queues and delays at UK airports.

The Government has ordered the vetting centre to prioritise checks for airports so new recruits can help plug the gaps quicker.

The Department of Transport (DfT) said counter-terrorist checks for aviation workers are now being processed on average in under 10 days – half March’s time.

Accreditation checks are also being sped up to be completed within five days on average, according to the department.

But in the short term, the staffing shortages appear to be hitting Heathrow airport.

Passenger Adam Kent, 59, said baggage reclaim “looked like a scene from a disaster movie” after arriving at Terminal 3 from Orlando, Florida.

“(There was) lost luggage everywhere, stacked between baggage belts, everyone stepping over it and no-one doing anything about it,” Mr Kent, from Worcestershire, told the PA news agency.

“Being brutally honest, it looks like a serious health and safety issue.

“No-one visible on the ground to explain the carnage or sort out the mess, it seems like lots of luggage has not arrived with passengers and just been dumped.”

Mr Kent said there was “appalling customer service” at the airport, adding: “Staff (were) nowhere to be seen, everyone was pretty shocked.

“The left and abandoned luggage was left unsecured and could easily be stolen… No duty of care shown to passengers’ possessions.”

Mr Shapps, who has devised a 22-point plan to help limit the disruption, welcomed the latest statistics.

“People have made huge sacrifices during the pandemic and deserve their flights to run on time, without complications and without being cancelled last minute,” he said.

“While this is a challenging time for the sector, it is not acceptable for the current disruption to continue as we head into the summer peak.

“The public deserves to know now whether or not their flight will run over the summer, and so I reiterate my call for the industry to commit to deliver the flights they have scheduled, or to cancel them well in advance so people can make other arrangements.

“Building on our 22-point plan to help the industry minimise disruption, we will continue to do everything in our power to ensure this summer is a great success for the British public.”

But Labour accused the Government of having been “missing in action”.

“These re-announced half-measures will do little to clear the huge delays in security checks and tackle the chronic low pay holding the industry back.”

However, the DfT said Mr Shapps held an aviation roundtable to discuss the disruption with airports, airlines and ground handling companies on June 1.

Related: ‘Completely to do with Brexit’: Ryanair boss hits out at Govt over airport chaos