Lake Como is a wonderfully ostentatious playground for the obscenely rich and glamorous. But beyond the pizazz there is rustic, mysterious charm; even for those without the personal GDP of a small Pacific island. It’s easy to imagine Lake Como as a Knighstbridge-on-the-lake. A soulless den of laundered money pumped into multi-million pound villas, ghostly-empty […]

Lake Como is a wonderfully ostentatious playground for the obscenely rich and glamorous. But beyond the pizazz there is rustic, mysterious charm; even for those without the personal GDP of a small Pacific island.

It’s easy to imagine Lake Como as a Knighstbridge-on-the-lake. A soulless den of laundered money pumped into multi-million pound villas, ghostly-empty for most of the year. An area seemingly only suitable for day-trippers and the hyper-rich. But, like Knightsbridge, there’s a reason people want to hide their cash here. As Mark Twain put it: “One almost believes that nowhere else than on the lake of Como can there be found such a paradise of tranquil repose.” 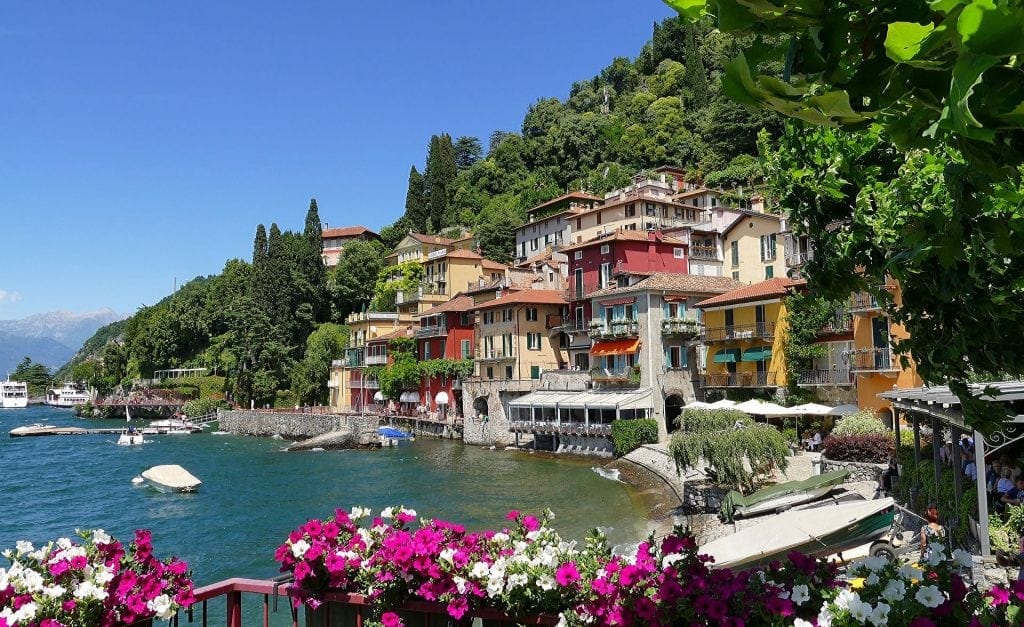 The lake itself, blindingly blue from its 1300ft depth, acts as a mirror to its opulent surroundings. Daytime cruisers pass, crammed 40-deep with bum-bag wearing tourists; while oligarchs and their rich, young wives lay atop yachts worth more than the average Brit makes in a decade. Locals stand at bars drinking espressos with the propensity of water to a hungover mouth. And grand, crumbling porticos draw you in, like moths to an expensive light, to even grander villas that warrant the curiosity of a million passers-by.

And then there’s George Clooney. Almost everyone here has a Clooney story. “He likes to arrive by motorbike and sit with friends on the veranda,” the waiter at il Gato Nero – a good rustic local restaurant serving modern Italian food, and a favourite of the Hollywood star – tells me. Tucked away in the mountain village of Cernobbio, the veranda he’s talking about is so high we’re practically sat on clouds. Making the villas and boats below look like a scattering of pin pricks through cotton wool. It’s breath-taking.

The Lake is wrapped in-between the Italian and Swiss section of the alps, a rollercoaster of snow-peaked cliffs and snake-winding roads. Its never-too-hot-never-too-cold climate makes for pride-fully pruned, lush-green gardens and wandering trees that litter the banks of the lake. At a visit to Villa del Balbianello (of James Bond Casino Royale fame), I’m told two gardeners spend three full weeks a year pruning one oak tree alone to create its toadstool shape.

The villa was gifted to the Italian National Trust in 1988, when its eccentric owner, the explorer Count Guido Monzino passed away. It’s still exactly as he left it – kitted out like a French palace and crammed full of artefacts he brought back from his travels. He was paranoid the Red Brigade were going to assassinate him,following the kidnapping and murder of former Italian Prime Minister, Aldo Moro, so he weaved his home with secret doors and staircases behind bookcases. Leaving this odd villa, I’m beginning to understand the draw of this mysterious, old lake

I’m staying at the recently opened Hilton Lake Como. Built on the site of a former silk factory, and the first hotel in Como itself; the 2,000-year-old Roman town, on the southwestern shore of the lake, has been at the centre of Italy’s silk industry for centuries.

The hotel mixes the modern and the old with panache. The exterior of the entrance is a tribute to its former industrial roots. While inside you are sharply transported to the now as you enter the glass-cube lobby. Wide and spacious and dominated by grey-steel girders, it’s got an air of LA-cool with its sunken sofas, styled foliage and the occasional surgically enhanced clientele.

Silk-weaves, designed by local artists, decorate the wide corridors that surround the outdoor, gravelled courtyard. Where you pass a ground-floor spa offering a heated swimming pool, sauna, steam room, and 24-hour gym. Although be warned, the spa is managed by an external company and will cost you an additional €29 (£25) to use (with the exception of those staying in suite, in which case it’s complimentary).

The room is an ode to modernity. Floor-to-ceiling windows flood the room with a gentle Como light. An elegant, and locally made, chaise longue lies subtly next to the huge glass slabs that make up the window. In the corner there is a dark wood drinks cabinet that tastefully hides the minibar. The queen-sized bed spans the width of the room, opposite a leisurely placed television. Lighting has been well-considered here; floor-standing and angle-poise lamps give the room a calming ambience.

Although many of the rooms lack the views you experience from the lake-side hotels, you can get sights to rival the best of the lake from the roof terrace and suites.

The hotel offers two restaurants and the odd proposition of afternoon tea. Like buying a full English on the Costa del Sol, it’s a frivolous but largely unnecessary addition to an otherwise good gourmet offering.

Their signature restaurant Satin, on the ground floor, has a chic but intimate vibe. It offers dishes from around the regions surrounding the lake, with a heavy Swiss influence. Main courses include turbot fillet with porcini mushrooms and courgette (€24/£21) and Parmigiana style risotto with fried mini perch fillets (€16/£14).

But it’s the roof-terrace is where this hotel really comes to life. Unconventionally modern, and against the grain of many of Lake Como’s hotels, it follows suite with an abundance of glass and steel to give you 360-degree views of the lake and mountains.

The restaurant and bar there, Terrazza 241, offers a well-considered, contemporary Italian menu, including a fine cocktail selection and a young, less-touristy clientele than many of Lake Como’s other nightspots.

The night I’m there, live saxophone is playing alongside a DJ, doing renditions of everything from Springsteen to Rihanna. It might sound awful on paper, but it fits this setup like a glove.

And then there’s the infinity pool. Worthy of a Hockney painting, the outdoor space is reason enough to book a room here. It’s fenced in by glass panels and steel-framed sun lounges, where you can indulge in their house cocktail – the Two41, made with a revitalising kick of citrus vodka, rosewater, lychee and lemon – and in the view.

To walk off the cocktails, I take the 15-minute stroll down to the actual lake. On the walk I am struck by something. This is the quietest I have ever heard Italy. The people walk in wonder, subdued by the magic of the lake.