A lovely, cosy, peaceful place – the perfect setting to unwind and decompress from the London lifestyle. 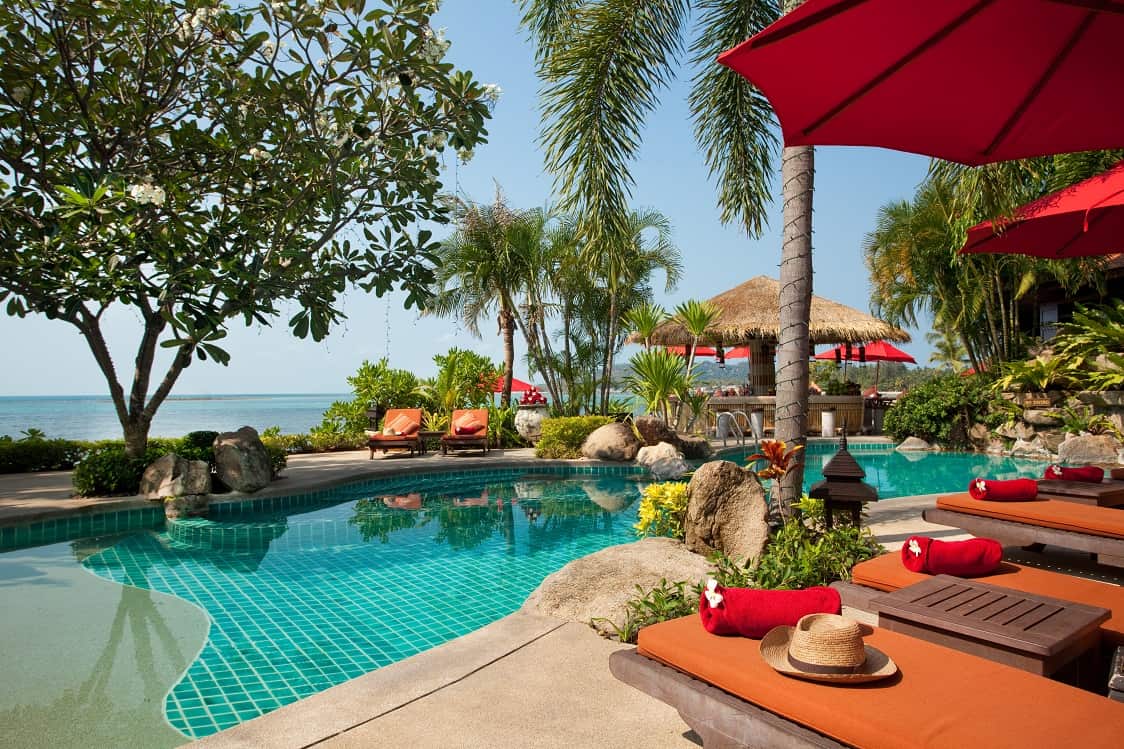 First, the bad news:  British Airways.  We were late taking off and late arriving, not that the pilot seemed bothered.  He made a little ‘sorry, not sorry’ speech and then we bundled off before being frogmarched at breakneck speed around labyrinthine Bangkok Airport by a terrifyingly efficient Thai official for our connecting flight, which we missed anyway.  And this wasn’t a one-off – my partner, who had flown via BA (or at any rate a “BA-operated flight”) three weeks earlier, also landed late, as did four or five other people we spoke to randomly while out there.  Based on this, I’d say if you are planning to fly to Thailand, don’t fly British Airways.  There are plenty of other operators out there – we made the mistake of choosing what we thought would be a reliable option.

Now the good:  BA gripes aside, mid- to late May is a great time to travel to Thailand.  Last year we went to Koh Lipe in March.  This year we flew to Koh Samui, saving ourselves several hundred pounds.  I’m no expert (what you want to read in a travel feature, right?) but it seems mid/late May is off-season.  There are noticeably fewer tourists around, so beaches and restaurants are that much quieter, and our fears about going into rainy season were misguided as the downpours obligingly only materialised at night (like clockwork), leaving most days clear and bright.  We were on Koh Samui for about two and half weeks and only two days were completely overcast; occasionally it had already hit 30 degrees by 8am.

Our first port of call was Rocky’s Boutique Resort, a 30-minute ride from Koh Samui Airport.   Rocky’s is a delightful little place, with a variety of rooms and suites sprawling along a hillside and down to a private beach.  The pool area is fringed by a couple of bars and restaurant and a second restaurant is right on the seafront – fantastic for a fresh breakfast or a romantic evening meal.

Occupancy was quite low because of the time of year, so we enjoyed even more of that trademark Thai hospitality – superb, friendly service and super-quick food ordering and delivery.  Included in our package was the choice of either a free traditional Thai dinner or a beach BBQ.  We chose the latter, and were rewarded with a magical (and rain-free) evening under individual candle-lit canopies and a seemingly endless buffet of steak, pork, chicken, fish, full vegetarian options, glorious puddings and of course bountiful fruit.  Entertainment was provided by a trio of intrepid fire-jugglers who performed in the shallows of the surf.

On day two we decided to venture off-campus and took the in-house taxi shuttle service to check out the recommended Crystal Beach which was about twenty minutes away.   We needn’t have bothered – I don’t know if it was because it was deemed to be ‘off-season’ but it was a huge disappointment.  Dull surroundings, poorly serviced and plagued with drone fly-bys, we sat it out for half an hour before returning to base, where we properly explored the private beach and found it to be everything Crystal wasn’t – picturesque, with actually comfortable loungers, complimentary fruit skewers (melon, watermelon and pineapple) and a plentiful supply of fresh coconut.  The restaurant was a minute’s walk away and in the afternoon we took advantage of the free kayak offer to investigate the nearby bay.

Our room was a place of cool, air-conditioned refuge from the humidity of the evening; beware – if you haven’t been to Thailand before, mosquitoes abound and although like a lot of resorts on the island Rocky’s regularly perform a sort of hi-tech ‘hoovering’ of these pests, you’d be well advised to make sure you go equipped with repellent, spray, whatever you can get your hands on.  Locals will be happy to give you their own particular recommendations.

The food here was great, particularly the fish.  I especially liked the snow fish, which was like halibut but twice as thick and twice as tasty.  The yellowfin tuna was also great, as were the king prawns.  And for unreconstructed old chaps like me I have to say their Full English breakfast was no token gesture – it was as good as anything I have at Bob’s Cafe in Queen’s Park.

This is a lovely, cosy, peaceful place – the perfect setting to unwind and decompress from the London lifestyle.  Rocky’s include little details like complimentary flip-flops, hats and beach bags, and each afternoon room cleaners arrive with a little something, sweets or fruit.  Very competitively priced too – go to www.rockyresort.com for a full rundown of features and prices.