In a dusty seaside town on an island off the coast of Senegal, Picasso 2 (it’s written on his hat and that’s what he says he’s called) is urging me to buy some of his artwork. “Today, it’s cheaper than Matalan!” he says out of the blue. A hit with his audience of one, he […] 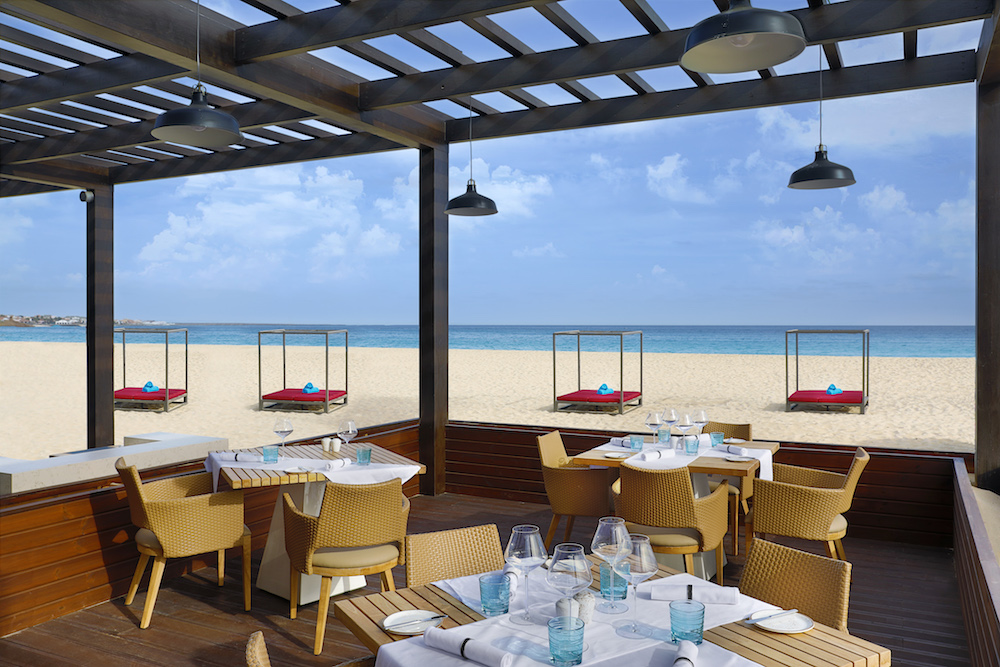 In a dusty seaside town on an island off the coast of Senegal, Picasso 2 (it’s written on his hat and that’s what he says he’s called) is urging me to buy some of his artwork. “Today, it’s cheaper than Matalan!” he says out of the blue. A hit with his audience of one, he continues. “You will not find cheaper in Primani!”

Some things about Cape Verde I know in advance: the all-year round warm weather, the minimal time difference, the postcard-perfect beaches. But there’s plenty to discover, much of which comes from the easy-going, friendly nature of the Creole locals. ‘No stress’ is the motto of the 10-island archipelago off Africa, and it’s evident.

The country only opened to tourism in the late nineties, and it’s still surprisingly limited – only TUI and Thomas Cook fly direct from London, and my excuse to visit is to check out the Hilton Cabo Verde Sal Resort, the first hotel from a major international chain in Cape Verde. Hilton’s investment is a sure sign that it’s a country on the rise.

“We’ve been in Africa for a bit more than fifty years, and we were the first in Egypt, in Ethiopia and in Nigeria,” says Jan Van Der Putten, Hilton VP, over a drink in the hotel’s Cize bar with Rudi Jagersbacher, Hilton’s President for Middle East, Africa and Turkey. “To be the first is a Hilton specialism – we help develop tourism and business travel in the country.”

While Cape Verde has other five-star options (Hotel Oasis Salinas Sea is a few doors down, for example) none seem to go as far to reach the highest global standards. Opened in October 2017, the hotel has an easy-to-learn U-shaped layout. With only side walls at its grand entrance, you can see straight through the semi-open reception to the silhouette of the palm trees lining the glittering pool. Beautiful. The adjoining beach is straight out of a guide book – think translucent blue seas and tea-coloured, unspoilt sand, with wicker screens by each pair of loungers that add a touch of elegance.

Its 241 balconied rooms (including 16 suites) are Hilton-standard. I loved my west-facing room, which offered lovely sunsets and shelter from low-season winds.

Throughout the hotel, service can be erratic (perhaps as it’s still new) so I had to re-explain or double check a few requests, but the warmth of key individuals is what stands out. In the restaurant, Joaquin the manager always greeted me with a smile and an enquiry into my morning/afternoon/evening, which was all the more appreciated as you could tell he was organising a million things at once. Roberto is a laugh, with a sense of humour so dry you’d think he was British. Towel Guy (as I’m calling him) emanates a happy disposition, and it’s infectious. I wish I could be proper friends with them all.

For real indulgence, the Eforea Spa is a beaut. It offers some interesting treatments, like one using Baobab seeds and another using African massage techniques – that’s the option I choose, and it’s performed with the moves and touches I’d expect from a specialist spa retreat.

Food-wise, breakfast and dinner buffets are served in Magellan Restaurant. It’s heaving with options, and for breakfast it’s especially nice to see that they still generously refill dishes up to its official closing time of 10.30am. I noted that even if the buffet breakfast is included in the rate, breakfast in bed is charged at its full price rather than just a tray charge. Tbf, it’s huge – the tick-box card is basically ignored and one of everything is brought in. I was feasting on it for days.

The Hilton is the first hotel in Cape Verde to offer 24-hour room service (to go with the 24-hour gym, and the 24-hour reception) but the Bounty beach restaurant must be one of the most pleasant dining options on the island. Far from yer average beach bar, it serves high-end food, all at usual London prices (think £13 for one of their ‘No Stress Specials’ like a freshly-caught tuna sandwich or fish tempura). The wine list, which leans towards Portuguese and Spanish, offers no duds that I tried, and emulating the current trend of charcoal buns, it offers squid ink bread amongst its produce – only right given the abundance of seafood on the island.

A key point: the hotel is generally not an all-inclusive, so guests aren’t bound to Hilton’s options.

“If you go to the local all-ins where they have a thousand rooms, visitors check in and they don’t go outside,” notes Rudi. “We want to participate as a local partner. Our business is their business, so it’s really important that guests have the option to explore the island.”

This opens up the nearby town of Santa Maria, a 15-minute amble away, filled with bars, cafes, lively restaurants and shops. Elsewhere on the island

Forgive me for underestimating the half-day island tour, having seeing nothing but desert from airport to hotel. Actually, the tour involves visiting a cute-as-a-button fishing village, the island’s colourful capital of Espargos, and natural phenomena like the Blue Eye inlet, which catches the morning light in a way that illuminates the water below. The natural salt mines, which gives the island its name, are found in a volcanic crater, though our driver’s broken English didn’t help us answer his question: “Inside or outside? Inside €5.”

What was inside or outside remained a mystery, but ever the adventurers, our group opted for ‘inside’. It meant we pay to get up close and personal to the fields of salt…and swim in its healing waters if only we had brought our costumes. Outside would have given us the same view of the salt fields, just from the top of the volcanic crater. Hey-ho.

Water babies will adore the island, and not only because whales, dolphins, sharks and turtles come out to play. Windy season brings world-class conditions for kite-surfing and actual surfing. Calmer waters are perfect for snorkelling and diving. Reefs, shipwrecks and caves make for plenty to see beneath the water line, and there’s an underwater statue of Christ by Santa Maria’s pier for an added attraction.

Adjoining the hotel, the Atlantic Star is a full-service nautical centre that’s the only place on the island to offer DPVs, the James Bond-esque engines that propel swimmers forward. It takes no time to learn, and is every bit as fun as driving a snowmobile/go-kart, jet-ski/anything with an engine, as I find out when we snorkel on Bikini Beach (where the party’s at, party people).

There I was thinking Cape Verde was just an island that only had its weather to offer. I stand corrected – the Creole culture, warm people and array of seafood only add to the beach appeal.

Tourism in Cape Verde has steadily been increasing by around 10 per cent each year, and that’s likely to continue, no doubt encouraged by Hilton’s expansion into the country (a city hotel in the capital of Prahia is set for 2020, with more resort hotels expected too).

“The importance of a global company like ours, with all the innovations we’re bringing from the electronic room keys to 24-hour room service, is changing the world of Cape Verde,” says Rudi. “In 10 years time, you won’t recognise this place. There are going to be big hotels; the old hotels will disappear and new brands will come up. There’s a lot of untapped potential still.”

I, for one, can’t wait to see it mature from a country on the rise, into a fully-fledged holiday hotspot.