GOLDCAR car rental reviews are so bad, one disgruntled punter started his own complaints website Spanish car rental company GOLDCAR is so dreadful that someone has created a GOLDCAR complaints website for people to share their awful experiences. One fed up customer created the site Goldcarcomplaints.com to vent his frustration at the terrible experience and lack of […] 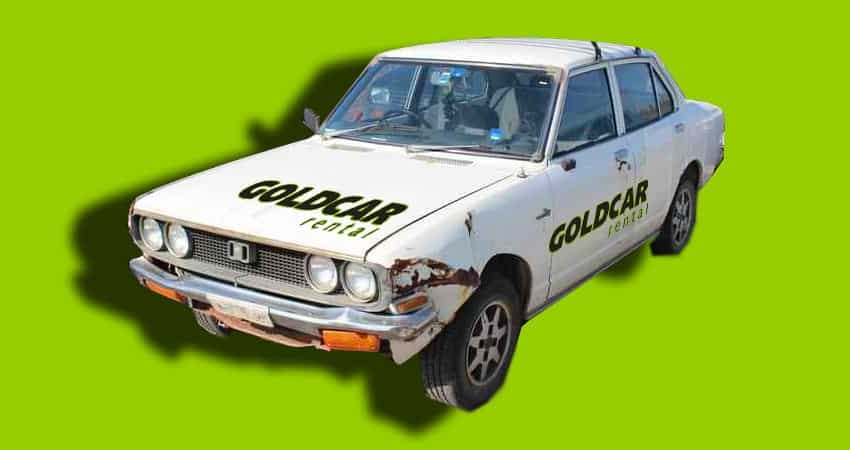 GOLDCAR car rental reviews are so bad, one disgruntled punter started his own complaints website

Spanish car rental company GOLDCAR is so dreadful that someone has created a GOLDCAR complaints website for people to share their awful experiences. 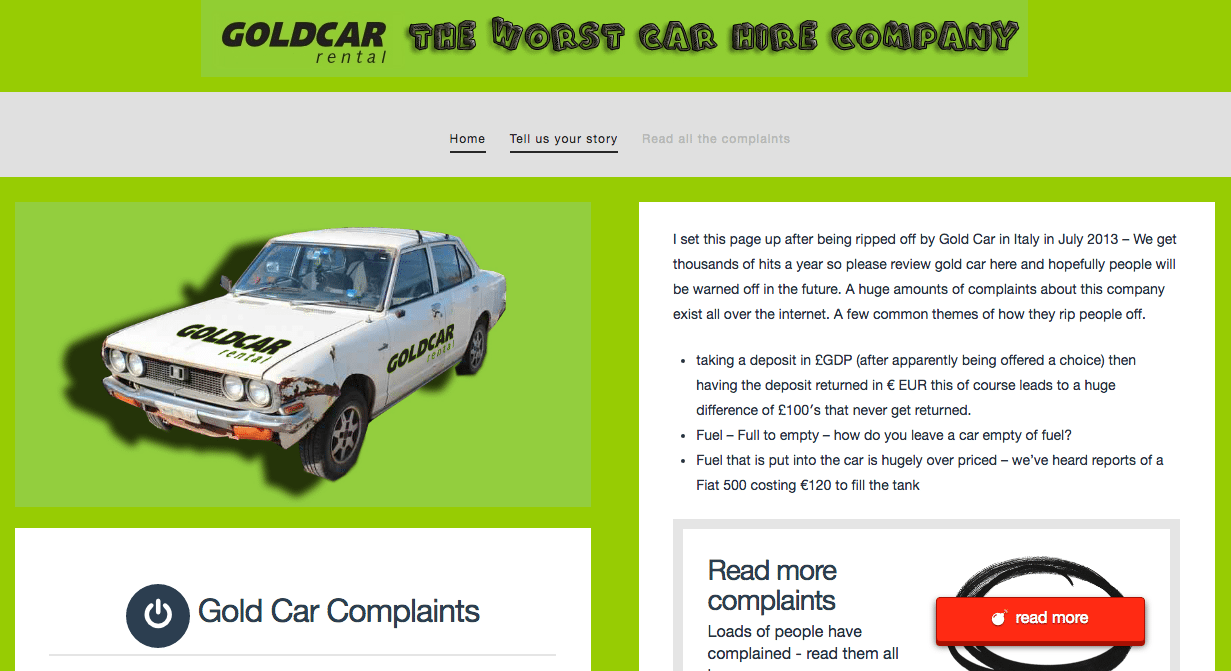 One fed up customer created the site Goldcarcomplaints.com to vent his frustration at the terrible experience and lack of customer service after hiring a car with the company, and now the site attracts thousands of hits every year with people complaining about their own holiday rental horrors.

The site owner says “The reason I found this site was after having a horrific experience myself, but sadly it was too late as the misery had already been inflicted.”

Following my own dire experience with GOLDCAR, I sadly only came across the site after I had returned from my holiday.  Like most people posting on the complaints site, I wish I had seen the site before booking my car hire.

The volume of complaints has made ripples in several other media outlets, including the Mail Online:  http://www.dailymail.co.uk/money/experts/article-2224704/Goldcar-car-hire-complaints-rack-Spain.html

After reading the many, many complaints posted on the website (as well as other review boards on the internet), GOLDCAR appears to operate more like a racket than a business.  Some of the common themes include:

My own experience was traumatic and after queuing in a hot airport with two screaming kids, only to be ripped off at the end of it. The fact their customer service is non-existent was the nail in the coffin. Oh, and it also took me months and numerous emails and phone calls to get my fuel deposit back.

We were basically penalised for not owning a credit card.  I booked our family car online using a visa debit without any problem.  When I arrived to collect the car in Cagliari airport I was told I needed to leave a deposit using a VISA or MASTERCARD that would be refunded back when I returned the car. The deposit was €1,000. However, when I handed over my VISA debit card for the deduction to be taken I was informed that they didn’t accept debit cards for this deposit and I would have to pay $216 Euros non-refundable insurance to cover the damage deposit.

How it works is that what we’d call ‘car insurance’ is often referred to as a ‘collision damage waiver’ when hiring a car, and this is usually included in the price.  But, when you arrive at the airport (or wherever you pick the car up from) you are told that your car hire comes with an excess of about €1,000 that is ‘pre-authorised’ on your credit card at the check-in desk.

Damage the car and you’ll lose part or all of this, which is something that is abused by many car hire companies, and a lot of complaints on the GOLDCAR Complaints website centre around this.

However, here’s the sting.  Even though the companies allow you to book using your Visa Debit card, some of them don’t accept these cards when taking the prepaid excess waiver.  So, if you don’t have a ‘Credit Card’ you’re stuffed.

In the event of not having a Credit Card, they kindly request (order you) to buy an excess waiver. But the price of this often exceeds the entire price of hiring the car and paying for the insurance for a week in the first place.  For example, our car hire with GoldCar came in at around £200, but we were told we had to pay an excess waiver of £216 for a week as we didn’t have a credit card.

I called ‘customer service’ where I was told that “hiring a car is a large responsibility and maybe you’re not responsible enough if you don’t even have a Mastercard’.  I was dumbfounded.

After a considerable amount of time basically being held hostage by our lack of credit card we  were forced to pay the non-refundable amount on a VISA debit card, and off we went with the car, terrified of going near anything that could be a potential risk to the car in fear of what might happen if someone even breathes on the vehicle.

The customer service, or lack thereof, continued when we returned the vehicle and were left to our own devices for 20 minutes whilst we waited for someone to come and check the car over and realise our fuel charge back to us.  We were told the fuel deposit would be put back in our account that week, but it took over three months to get it back.  I couldn’t even be bothered to fight about the pitiful amount they put back in my account after returning the vehicle with a full tank.  They’d even deducted some sort of ‘admin’ fee too.

This is unregulated industry at its worst and I cannot express the complete lack of customer service within this company.