The idea of going to a spa has always filled me with dread. Walking around in a robe with my bare feet on display, quietly shuffling in slippers five sizes too big, while a stranger prods at me with their bare hands? The whole thing gives me the heebie-jeebies. It’s everything I stand against – […] 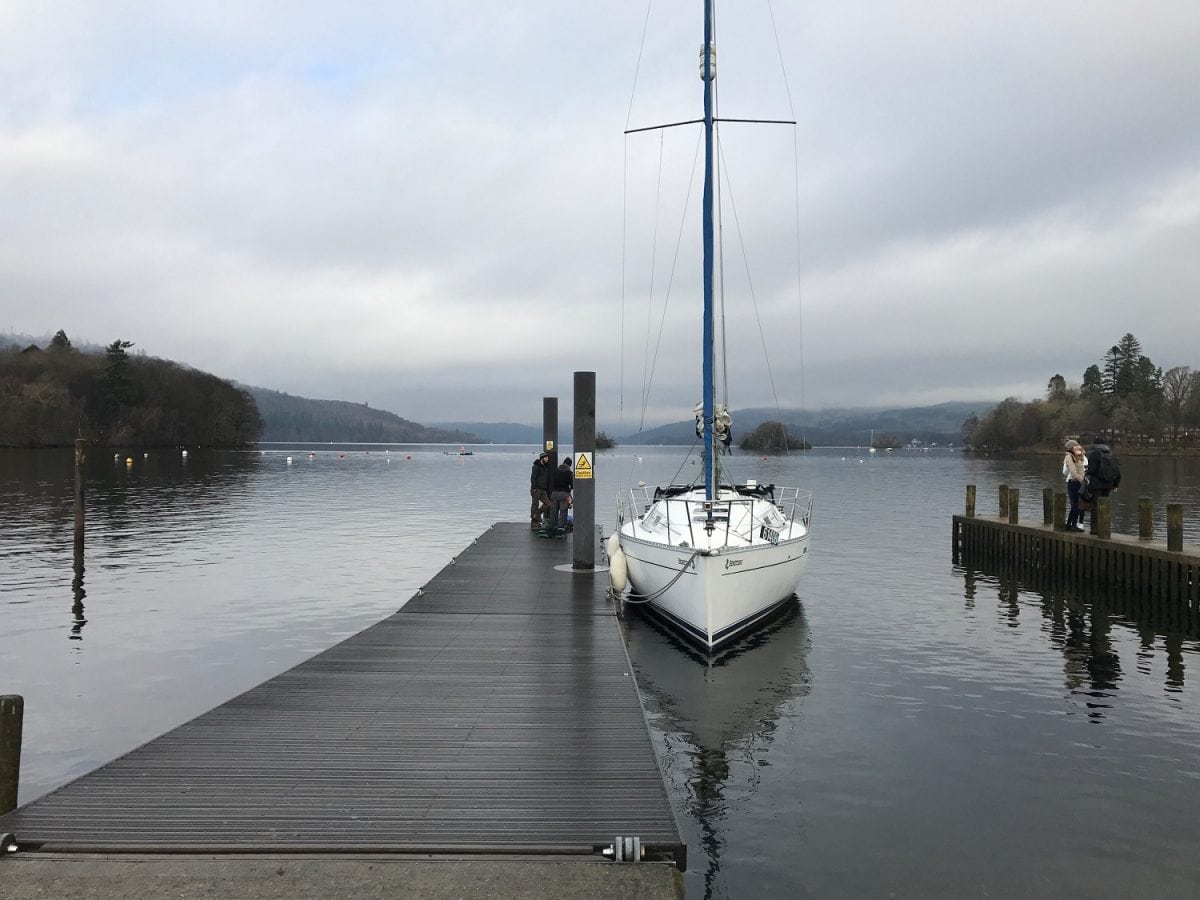 The idea of going to a spa has always filled me with dread. Walking around in a robe with my bare feet on display, quietly shuffling in slippers five sizes too big, while a stranger prods at me with their bare hands? The whole thing gives me the heebie-jeebies. It’s everything I stand against – luxury, relaxation, and calm. But I’m 28 now, and decided it was time to grow up and learn how to be at peace.

Travelling from London to the Lake District seemed like a mission I couldn’t be bothered to embark on. But, actually, it’s only just over two hours from Euston to Oxenholme and the journey’s ridiculously glorious. I booked my train tickets through the awesome Trainline app (because arriving at the station an hour early to collect my paper tickets from a machine makes me super angsty and itchy and generally un-chill). That way, I could just flash my phone at the member of staff, feeling both important and un-anxious. I’d also booked my tickets in advance that meant there were about 40 per cent cheaper and only cost £30 each way – not bad for a 600-mile round trip.

From Oxenholme it’s about 16 miles to the Lakeside Hotel and Spa. Stupid, millennial, privileged me assumed I’d be able to book an Uber but a) Uber does not exist in the Lake District and b) there was not a hint of 3g. Go figure. It cost me £40 to get a taxi to the hotel, which seems extortionate for a 20 minute journey, right? Anyway, I tried to forget about that because I was on holiday and supposed to be chilling the f out. All my post-train annoyance washed away when we pulled up to the hotel. It’s perched on the edge of Lake Windermere and is so quiet it’s verging on spooky. It was getting dark and Lakeside Hotel and Spa was lit up with twinkling lights and looked v majestic, like a cute but super sized fairytale cottage.

I checked in, my bags were prised out my hands by an over zealous but friendly porter and I was shown around by the duty manager. Although a little old fashioned in its décor, the hotel is immaculate and a great combo of cosy and fancy. I was shown the bar (adorable and with an open, roaring fire and local ales on tap), brasserie, swanky restaurant, conservatory, snug and main hall. The duty manager then whisked me into the spa and gave me a tour of the pool, sauna, steam room and treatment rooms. There was not another human being in sight – it was the dream. Our room was on the second floor and very nice, if not a little mumsy. The floral patterns were semi-offensive but the bathroom was modern and shiny, and our view was crazy. It looked out straight onto the lake and was a tree-lined glimmering stretch of stunning landscape. Also, there was a double rainbow right outside the window. I cried. But then again I was a bit tired from the journey…

Deciding to swim, we changed into the toweling robes provided. This bit scared me. It felt so wrong to walk around a hotel just in a dressing gown. But I decided to woman up and get on with it, and was very glad I did because newsflash: walking around in what is essentially your undies is madly liberating. The pool was quiet and the atmos was very relaxing. I then tried out the sauna which instantly made me feel sick, before I became accustomed to it and then refused to leave because it was so luxury. We had been booked into the hotel’s Lakeview Restaurant for 6.30pm. The staff were really accommodating but also a bit robotic. Whenever I made a joke, they’d respond with a courtesy laugh. Maybe it’s because I’m not actually funny, but that doesn’t seem quite right. The Lakeview Restaurant is pitched to guests as the posh place to dine. There was lots of cutlery that made no sense to me and the cheapest wine was over £30 a bottle. I instantly felt out of place and kept awkwardly clinking my ten million forks together and dropping my napkin.

As a veggie who avoids dairy when possible, I was apprehensive. Actually, I had two awesome options for my main course and ended up ordering the pumpkin cannelloni with pine nut puree, salsify and girolles (£25). To this day I am unaware what the last two foods are but they were so tasty I just don’t care. My starter was a £9 Lancashire cheese soufflé (so much for being dairy-free) with tomato jam and it was excellent. My pal had some very fancy local steak (£33) which looked really great, even to a herbivore. We shared dauphinoise potatoes (£4) as a side because, well, holiday, and just kept gawping at each other in between mouthfuls as they were so creamy and rich. Afterwards, not used to eating such rich and poncy food, I felt approximately 30st. It was pitch black outside and the lake looked unbelievable with the moon reflecting in it (I’m such a sucker for a full moon).

For our first full day we decided to wake up early and try out the brekkie which was included in the room price (from £179). The options for breakfast were just brilliant – so much fruit, wacky flavoured yoghurts, pastries and cooked bits too. I got to have my favourite: veggie sausages with avocado, toast and a fried potato carb thing.

Just outside the front door of the hotel is a ticket office where you can catch a boat to surrounding towns. We boarded a 9.45am boat to Bowness, which is about a 35 minute trip along Lake Windermere. It was so still and beautiful, I didn’t care that the incessant rain left my knickers sodden and my hair looking like Tarzan’s. Bowness was nice but a bit touristy and busy – it’s got a lot of Beatrix Potter history and people go loopy for it. After arriving back at the hotel, I made my way down to the spa for an hour-long treatment. The thought of a strange woman touching me with oils makes me feel both sick and scared, but I forced myself to go. I wanted to relax and get into it so so badly, but when she put on panpipe music and I completely lost the plot. The therapist was so nice, but I just felt so on edge. Some bits of the full body massage (£79) were nice (fronts and backs of legs, arms), but when she got to my back I just didn’t enjoy it. Maybe I’m a tense old hag that needed a proper de-knotting, but I spent approximately 25 per cent of the massage in awkward agony.

That evening, we were looking forward to trying out the brasserie which seemed a bit more relaxed than the Lakeview Restaurant. We booked a table for 6.30pm, ordered large gin and tonics and headed to the snug to read our books. Not another soul joined us, it was like being in your own living room but much nicer.

Unfortunately, once we got to the brasserie, it turned out the menu was the same as the Lakeview Restaurant’s. We’d we’d spent all day dreaming of burgers only to have our greedy hopes dashed. This time, we went for cocktails as starters (an old fashioned and a cosmopolitan – I cringed when I ordered it but it was divine). I had the red onion tart tatin with charred broccoli because by now, my body was begging me for some greens. It was lovely. Probably not worth £25, but lovely nonetheless. My pal had the cornfed duck breast (£28) which looked utterly vile to me, but he promised me it was perfect. The waiting staff were so attentive. But also a little wooden and not really up for having a laugh or making jokes. Maybe that’s just what it’s like in more upmarket places? We’d read in the hotel guide that we could order room service 24 hours a day, so had long been hatching a plan to order a cheeseboard to the room after dinner. We’d also been told we could leave our shoes outside the room door at night, and someone would come clean them. We carefully placed them outside the door before going to bed. At 10pm when I called down to reception to put the cheese plan into action, we were told the kitchen was closed. I’ve never been so upset. Plus, when we woke up in the morning, our shoes were still there but just as muddy as before. We felt like prize mugs.

Upon checking out I was showed around the hotel again, and taken into many conference rooms and great halls perfect for weddings. They were really cool spaces, perfectly tucked away so no one would know you were there.

Although the trip was a little more expensive than I’d anticipated, I can’t fault the quality of the food and booze. By the time we left, I felt so incredibly relaxed. It seems mad that such peacefulness is just a short train ride away from London. Would highly recommend to anyone wanting to switch off their brain noise and indulge in fancy wine and food.