Set in Pittsburg in the 1950s and adapted from August Wilson’s 1983 award-winning play of the same name, Fences is the third feature from Denzel Washington in his directorial guise. The play was part of a bigger body of work titled The Pittsburgh Cycle which charters black lives across the decades of the 20th century. […] 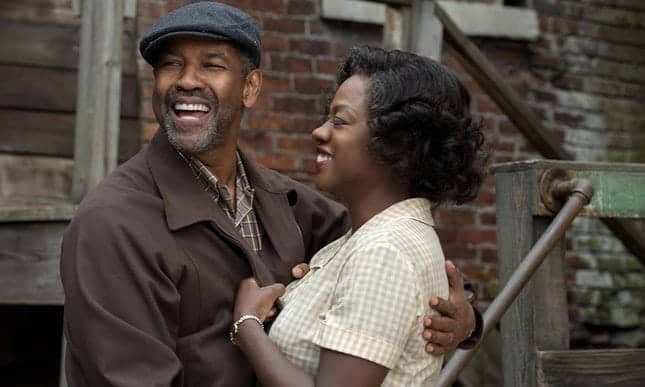 The film centres around the story of ex-baseball player turned garbage collector Troy Maxson (Denzel Washington), a larger than life character who revels in telling tall tales and holding court every payday in the backyard of the home he shares with his wife Rose (Viola Davis) and their teenage son Cory (Jovan Adepo). Washington delivers the beautifully crafted dialogue as if his life depended on it, but by far the most impressive performance comes from the impeccable Viola Davis. Davis plays Rose, Troy’s doting second wife, a woman whose life has been dedicated to making her husband the happiest he could ever be. Davis’ exquisite performance renders even Washington’s grandiose turn as Troy almost insignificant. We initially believe Troy to be the harmless joker with too many overly elaborate stories, but after he commits the cruelest of acts, his earlier bravado and charm are replaced by something altogether dark and insidious.

Starring alongside Washington and Davis is the brilliant Jovan Adepo as Cory – Troy and Rose’s teenage wannabe professional baseball player son. Cory’s fraught relationship with his father makes up one of the central themes of the story and forms which acts as a catalysts for the denouement. Also worth mentioning is Mykelti Williamson in the heavily symbolic role of Troy’s brother Gabe, a brain-damaged veteran from the Korean war whose frequently delivered monologues add another layer of allegory to the narrative.

With a screenplay written by Wilson himself, Fences finds itself in the familiar problematic territory of play adaptations; the film’s language can at times feel overly poetic and often peppered with allegorical dialogue – however this doesn’t take away from the hard hitting screenplay. The strength of story lies not only in the way it is told, but by the writing itself. Washington’s direction is overshadowed by a script which hangs over the film as a constant reminder of the source material. The film’s look and style might at times seem a little stagey, which can be a little jarring for anyone who isn’t familiar with the play. However, Fences can stand on its two feet on the strength of its cast alone, added to the brilliantly convincing period setting, the production is sure to please all those familiar with the original play and convince new fans.

Fences is on general release from Friday 17th February.