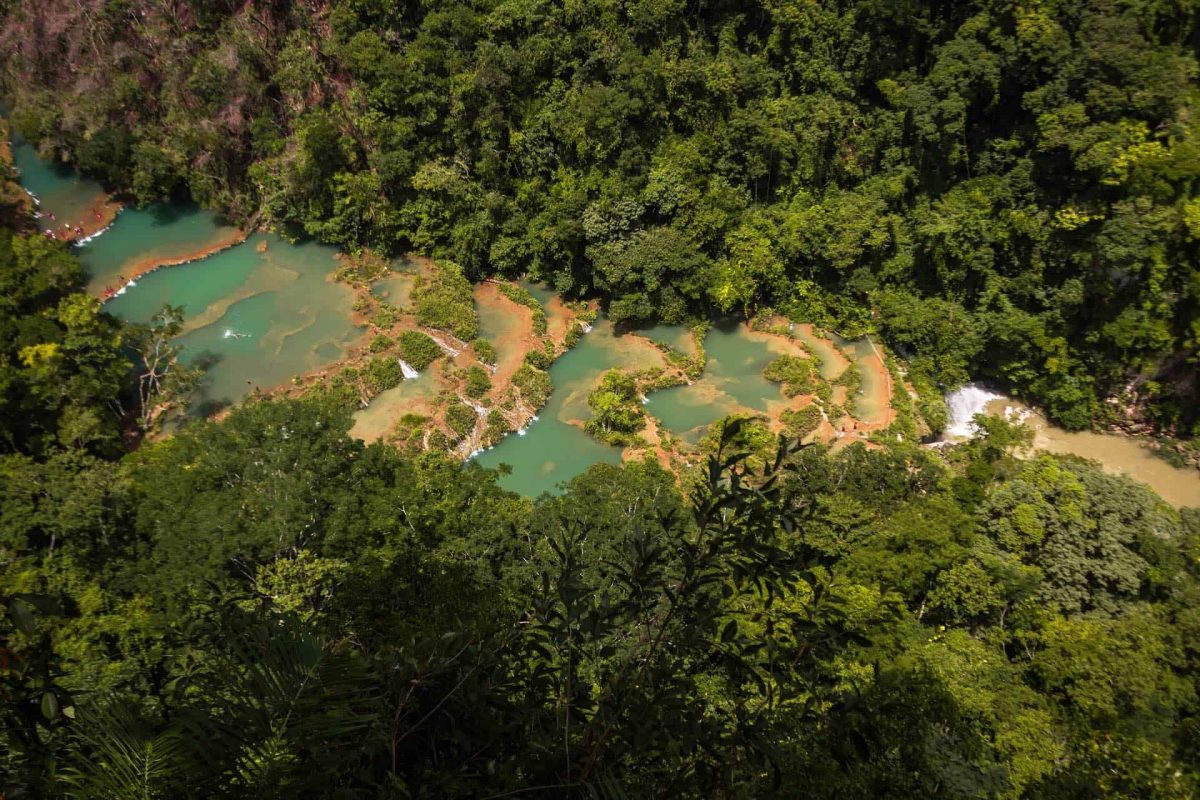 Guatemala is an enchanting and affordable country blessed with misty mountains, rich Mayan history, emerald-tinted natural swimming pools, tranquil lakeside yoga spots, hotels with volcano views, and an eternal spring-like climate. If you’re lucky enough to visit, you’ll no doubt be charmed by smiley local folk in multi-coloured ‘traje’ outfits, tempted by the abundance of chocolate and coffee tours available, and intrigued by the constant smell of sweet burning wood, which comes from traditional wood-fired ovens.

Lake Atitlán is a serene body of water in Guatemala that sits below three striking volcanoes (Volcán Atitlán, Volcán San Pedro and Volcán Tomilán). The massive lake, created by an enormous volcanic eruption tens of thousands of years ago, is said to be the deepest in Central America and looks a bit like a sun-kissed Lake Windermere. Around it, you’ll find a scattering of little villages, which you can get to by water bus. Panajachel is where you go to shop textiles. San Pedro has a party with backpackers vibe. San Marcos is Atitlán’s yogi and hippie heartland. And Santa Cruz is bang-on for diving and chilling.

This trying hike through four spectacular eco systems (farmland, tropical cloud forest, high alpine forest and volcanic terrain) will see you climb to the summit of a 3,976-metre dormant volcano. You don’t have to be an ultra-marathon runner to hike Acatenango (although it helps), but it’s certainly not for the fainthearted. It’s possible to get up and down Guatemala’s third highest peak in one day, although an overnight camp and hike is strongly advised. This way you can summit for sunrise (and/or sunset) views and watch Volcán Fuego spill with lava from your campsite at night, as you toast marshmallows over an open fire and trade stories with fellow travellers. There’s a strong possibility you’ll feel some of the effects of the altitude, so it’s best to stay in Antigua for a few days beforehand to acclimatise. Take snacks, plenty of water, warm clothes/thermals, gloves, hat, scarf as things get cold and a headlamp/ torch. Finally, be sure to book with trustworthy guides, like Old Town Outfitters, who have experienced guides and quality kit. It might cost a few extra quid, but you can’t put a price on your life…

Antigua is possibly the most photogenic city in Central America, certainly Guatemala, thanks to its Seville-like pastel-coloured buildings, cobbled streets, and volcano views. A UNESCO World Heritage site in its own right, it’s much more polished than the rest of Guatemala and is almost European in feel. Here you’ll find chain restaurants, fancy cars and heaps of tourists milling around. Café No Sé is where you go for a big night out on the mezcal, Café Rainbow is a chilled spot for reading or catching up on work, and Rincon Tipico is a solid choice for cheap local grub. And don’t be afraid if you hear loud bangs, it’s probably the local church inviting people to a celebration by setting off fireworks (that’s a thing here). If you fancy getting out of the city, take a bike tour with Old Town to explore the neighbouring villages, which are less touristy and draped in history and old-world charm.

Semuc Champey is one of Guatemala’s best-known attractions and is renowned on the backpacker trail for its emerald and turquoise rock pools, rope swings and candle-lit caving excursions. It’s also a pain in the backside to get to (quite literally), but well worth a visit if you can tolerate a long bus ride through the dense jungle on roads that look like they’ve been taken to with a sledgehammer. It’s best to spend a few days in the jungle here as you’ll need to relax after a long old journey. But you’ll soon forget about it as you tube along the river with a beer in hand. Stay near to Semuc Champey or in the neighbouring town of Lanquin, which is only 10km away (but takes around 45-minutes by 4×4). Hostels in the area often run package trips that include tubing or caving for about £20. Entry to the national park costs about £5.

Guatemala is an ideal place to learn Spanish because natives speak slowly and clearly. Not only that, it’s a cheap country to learn too. Book a live-in Spanish experience with three meals and one-to-one tuition a few hours a day for under £200 a week. Antigua, Lake Atitlán, Flores and Quetzaltenango are all popular spots to learn. And a lot of the Spanish schools offer follow up Skype lessons, so you can keep learning with the same teacher while you’re stuck in cold, miserable Blighty. Do your research before you book to make sure you get the best experience.

Take an extra suitcase when you visit Guatemala because there’s an abundance of stuff you’ll want to take home. Be it a cute doll, an ethically made technicoloured blanket, homemade local chocolate or premium coffee. Or, if you’ve got a few quid, some Mayan-style jade jewellery. Getting lost in the many markets here, from Antigua to Lake Atitlán, is all part of the experience. Haggle until your heart’s content but remain respectful. Guatemala has heaps of initiatives set up to empower young women in local communities. In co-operatives, these women receive a percentage of the cost of the garment, which they’ve personally weaved themselves. Often you can check the picture and description on the tag to see who made your new purchase and how long it took them to do so. A great way to invest your well-earned cash in the local economy.

Hardly an off-the-beaten track place of interest (Tikal is one of the best-known tourist sites in Central America), this ancient ruin was once one of the most important Mayan cities around. And it’s thought that around 100,000 people once lived there. Feel like Indiana Jones as you wander around crumbling temples skirted by jungle, which were used for ceremonial rituals as far back as 200 AD. Keep an eye out for the cheeky monkeys.

No visit to Guatemala would be complete without a ride on a chicken bus. Multi-coloured North American school buses are a popular mode of transport for locals throughout Central America, and it’s no different In Guatemala. You’ll see them bumping along the city streets and shooting around corners in the mountains – often with bikes, luggage and occasionally livestock on the roof. The name chicken bus is said to have been given by tourists who were bemused to be riding alongside, or below, live chickens. Another theory is that foreigners named them chicken buses because they were crammed into them and transported like livestock. But how do you use ‘em? Don’t dither, just tell the ‘ayudante’ or bus inspector where you’re going to then hop on. Tell the driver your destination again (just to be safe) and take a seat then wait for someone to come around and take your fare (carry change). Keep an ear out for your stop, as there’s no chance of them taking you back once you’ve missed it. Prices vary but chicken buses are often significantly cheaper than riding a shuttle, but be careful.