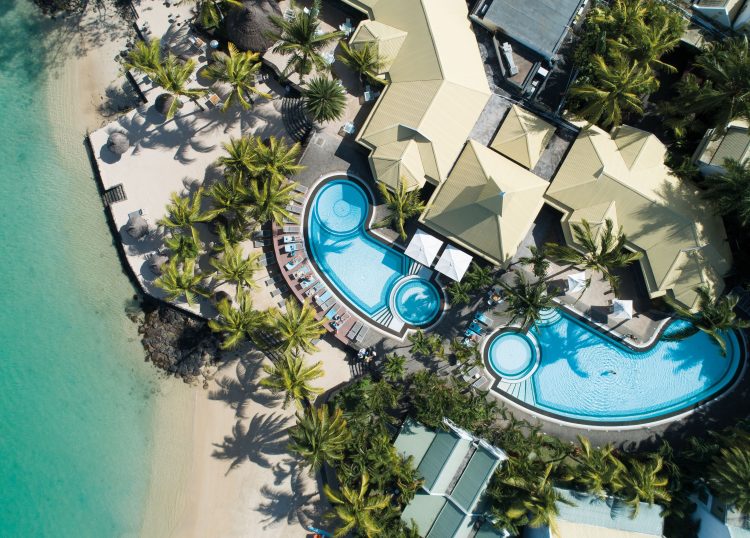 I’m here to explore Mauritius, the sugar-rich island dropped in the middle of the Indian Ocean, via two of its more affordable hotels run by the Veranda chain: Veranda Tamarin, a bohemian surf hotel; and Veranda Grand Baie, a more regal affair with its own private beach and wellness centre.

Following a 12-hour flight with Air Mauritius – the only airline to fly direct from London Heathrow, and who also serve one of the best airplane meals I’ve tasted, a rich coconut and, dare I say it, tender fish curry (at 12,000 miles?) – I’m greeted at Veranda Tamarin with a glass of iced tamarind juice, a sweet, tart drink they sip by the bucket-load over here, and a shaka, the pinkie and thumb out surf hello immortalised by Bill and Ted. Anywhere else, this would feel phony, but here, in the easy-going surf vibe of the Tamarin, it’s got a natural air of Keanu Reeves cool to it.

The hotel is on the island’s west coast, an hour’s drive from the airport, and sits on its only surf spot, Tamarin Bay. A gnarly curved beach that’s as popular with tourists as it is with locals.

This place feels very much part of the community. No monolithic, fenced off walls, or miles of private driveway, you’re literally there: on the public beach. Yes, you’ve still got the obligatory blue waters and palm trees, but you’ve also got locals barbecuing and playing Sega (the music, not the furry-blue alien hedgehog), while Mauritian kids kick footballs barefoot from dawn to dusk.

In-keeping with the surf-vibe, the rooms have a boho-chic feel. Murals by local artist, Kim Siew brightly adorn the walls, and wicker chairs and beach baskets bring the outside in.

The superior rooms have a pool-side view and are spacious inside and out, with your own double balcony and painted concrete floors. Privilege rooms look onto the sea and include access to an adults-only infinity pool with its own private bar, and a sweeping view of the mountains and the bay.

Staff are young and attentive. Service is less formal and stuffy than many hotels on the island, but this adds to the Tamarin’s laid-back charm. The hotel has two pools, a main larger one, and a rooftop one with a view right across the bay and its own private bar.

The Veranda Tamarin really comes alive, however, with its facilities and activities. Built around its surf heritage, there’s a wave of water sports and wellness activities to keep you entertained. These include surfing, paddle boarding and diving lessons from the hotel’s boathouse, and chakra-rebalancing treatments at the spa.

Part of the Veranda hotel chains’ ‘Deep into Mauritius’ experience, the hotel also offers tours of local areas by bike and on foot. I took a guided walk up the Le Morne, a UNESCO World Heritage site. The mythical Mauritian mountain acted as a refuge for runaway slaves in the 19th century and is steeped in the island’s troubled history. On the journey to the top, you’ll pick tamarind, loki fruits, and neem – a blood pressure lowering leaf– before climbing above the clouds to one of the most magical views I’ve witnessed.

You’re spoilt for food and drink at the Tamarin. The hotel has three eating and drinking spots. Ye! Man, the more relaxed of the two poolside restaurants is decorated in line with the hotel’s surf heritage and provides themed dinners, international breakfasts, and local Mauritian curries. While Tribu provides à la carte regional cuisine.

The highlight though is their beach-side bar, Crazy Fish. A sand-under-foot, rum-filled outdoor drinking spot, which is brimming with locals and live jazz.

Book a Port Louis food tour with local foodie and all-round good guy, Dada of Taste Buddies. The three-hour gastronomic sojourn will envelop you in the country’s diverse food culture. From French-inspired banana pastries to curry-filled rotis. It’s an orgasm for the palate. Bookable through the Veranda Reservations Team at £42 per person.

Veranda Tamarin – Standard Rates from £120 for 2 adults/night. They have a special offer in celebration of the hotel group’s 40-year anniversary and are offering 40% off standard rates for stays in all room types and meal plans, booked by 31st August 2022. Special price is subject to availability. Reservation can be made on their website https://www.veranda-resorts.com/en and via email: booking@rogershospitality.com +44 207 048 2032 (UK))

When you picture a Mauritian hotel, something resembling the Veranda Grand Baie probably comes to mind. It’s a sprawling, colonial-style building set over 90 rooms, which you enter off an extensive tree-lined private driveway, and where you’ll be greeted to the beat of a traditional drum, the maravane. If Gatsby held parties on a tropical island, this is where he’d head.

Grand Baie is a bustling village on the north of the island and the most popular destination in Mauritius, where bars like Banana see locals and tourists partying hard till the early hours. Despite being so close to the action, Veranda Grand Baie manages to maintain its old-world creole charisma thanks to its breath-taking location on its own private beach – a ten-minute jaunt away from the main strip.

From the exterior the rooms of Veranda Grand Baie are a site to admire. Green, wooden balconies peak out from behind palm trees, while traditional creole-style corrugated roofs rest handsomely on top.

Inside, it’s a little disappointing. The rooms need a refresh (update: the hotel is currently undergoing a full refurbishment due to reopen 2023). The furniture feels tired and the pictures on the wall of identikit-sunsets cheapen the atmosphere, while my windowless bathroom at the back of the room felt dark and disconnected. It’s saved by their balconies, which capture hypnotic views of the evening sunset, glistening in the water of the pools below.

A Mauritian three-and-a-half-star hotel will put to shame many European five stars. It’s a country whose main industry is tourism, and as such, service is in its DNA. And nowhere is this truer than at the Veranda Grand Baie, where manager Christophe and his team manage to pull off laissez-faire assertiveness with amazing prowess.

The hotel holds regular parties on its peer. On one of the evenings I was there, they had a white party. Lines of old French couples draped in linen and dancing to Sega music probably sounds sicklier than a cup of tamarind tea? Wait till you get few of the in-house chilli rums down you – you’ll be leading the conga well past bedtime.

As well their dry land parties, Veranda are also specialists in throwing a good time offshore. Their Catamaran boat tour is a local legend. Setting off from the jetty of the Veranda Paul et Virginie resort, Captain Jack and his buddies, Julien and Louis, were dishing out barbecued fish, rum punch, and enough bass to get your hips moving Shakira style.

The hotel specializes in their own infused rums. Chili, pineapple, and tamarind to name a few, get loaded into bottles of 70 proof rum and let to work their magic for a season. The result is an eye-watering start to your night, the Mauritian way.

For food, the Baie offers an à la carte menu and a world buffet, an eclectic mix of honest, fresh produce well cooked. Their curries are a winner while the desserts will keep you going back for seconds.

Surprise your other half with an ‘Apero moment’. For £8.50 per person, you can indulge in cocktails and light snacks with a sea-front bar and your own personal mixologist.

If tropical luxury getaway that won’t wipe out your lockdown-savings is what you’re after, then you can’t go wrong with the Mauritian Veranda experience: eclectic food, laid-back but attentive hospitality, and chilli rum that’ll keep you partying well into the hot air of the night.

Veranda Grand Baie will be reopening after its refurbishment in March 2023.

Luke O’Driscoll was a guest of Veranda Resorts. For more information: https://www.veranda-resorts.com/en

Flights with Air Mauritius from £567 for direct economy flights from Heathrow to Mauritius. Air Mauritius operate 3 weekly flights between London and Mauritius with new generation A330neo and A350 planes.

Their latest state-of-the-art aircraft, the A330-900 Neo offers unprecedented levels of comfort. Your holiday starts the minute you step onboard with passengers able to sit back and enjoy a film, a drink and enjoy some Mauritian Hospitality.