The Lexus LC500 delivers a distinct proposition in terms of its striking looks and naturally aspirated 5.0-litre V8 engine, but what’s it like to live with? 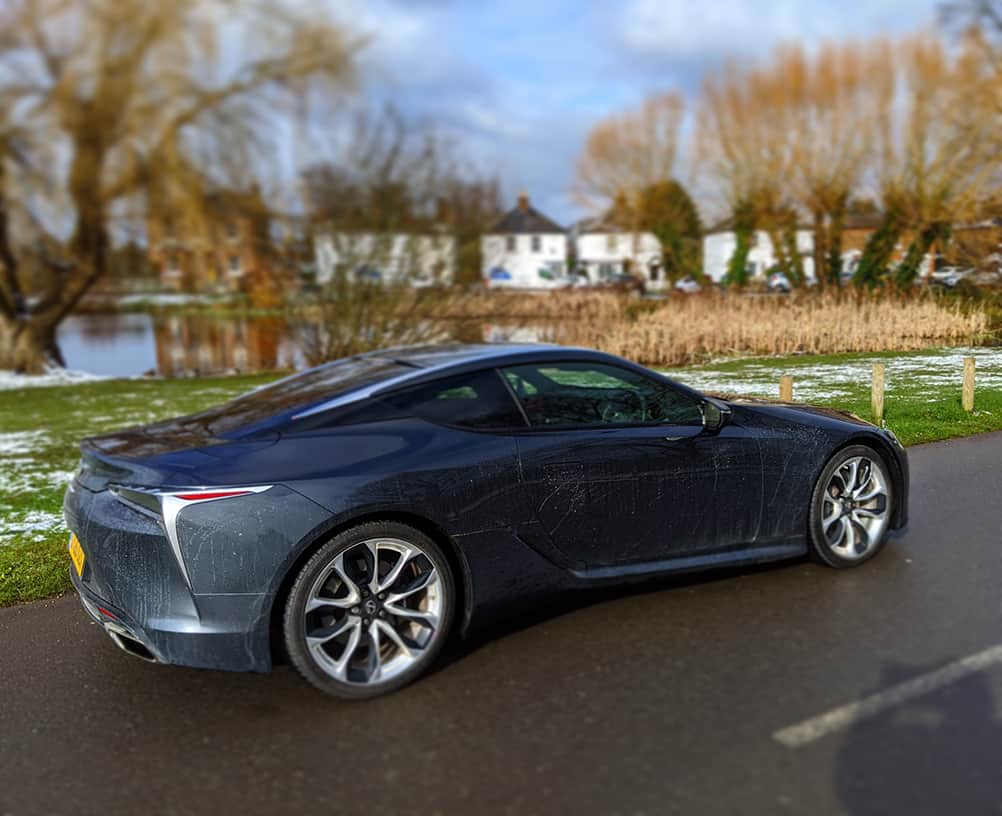 It’s good to see that some car manufacturers are still placing an emphasis on styling. In a market saturated by dull SUVs and nondescript crossovers which are implausibly popular with the masses, they can feel few and far between, but they do still exist. During such dull and nondescript times as these impossibly long lockdown months, you’ll take anything that breaks from the norm, even for a fleeting moment.

This brings us to the Lexus LC500. If nothing else, this is a striking car in terms of its appearance. The triangular headlights flow with the creases in the bonnet and the imposing front grille. The car sweeps pleasingly from front to back and doesn’t have a favourite angle – it just looks magnificent all round. Even if it’s not your cup of tea, it’s a car that captures attention because it is distinct from almost everything else around it.

Lexus have gone in their own direction at every turn with this car. In a world dominated by turbo chargers, they’ve fitted this with a naturally aspirated 5.0-litre V8 engine that produces 467bhp. This results in a stunning acoustic accompaniment to any journey. These engines are a dying breed, which is a crying shame, because they are automotive masterpieces.

The compromise this entails is a drop off in performance levels. A stated 0-60mph time of 4.7secs concedes plenty to some opponents, but what it lacks in power off the line it makes up for in midrange performance. A healthy squeeze of the accelerator from a rolling start and the LC500 sends you down the road at a fair old rate.

It handles speed bumps and potholes with minimal fuss and it’s supremely comfortable and smooth to drive. The cabin is well presented and accessibly laid out. All the driver and comfort aids are there – blind spot assist, lane departure warning, adaptive cruise control, heated seats, heated steering wheel – making this a comfortable environment for any journey. The sport seats, too, which come as part of the Sport and Sport+ packs are brilliant.

It is said that Arabian rug makers would deliberately stitch an imperfection into their works because the only thing perfect is God. Lexus have pulled a similar trick with the infotainment system here. Everything about the interior and the layout is near flawless, except this system. Operated by a mouse pad, it is difficult to get to grips with and nigh on impossible to use on the move, especially if you’re trying to use the satnav, which doesn’t seem to recognise half the places you’ll want to go. Maybe it has a philosophical objection to the Municipal Reform Act of 1835 and therefore refuses to acknowledge the existence of Arundel? The voice command doesn’t help here either, further refusing to acknowledge the existence of my house.

The good news is that Android and Apple car systems are supported. And you may well get used to the system over time, but you will spend a bit of time swearing at it during that process.

As soon as you apply foot to accelerator again, however, all is forgiven and forgotten. That sweet, sweet sound and the cosseting cabin are great stress relievers.

I did actually make it to Arundel and beyond. I also took it to Benson in the Chilterns. The LC500 is perfect for long journeys. It’s smooth as silk and supremely comfortable. It lacks agility on B-roads, the two-tonne weight starting to present itself in the driving experience and there’s no great sense of feedback through the steering to encourage great confidence to go on and push the limits, but once you get your head around what this car is, it becomes a wonderful machine to be in.

For this reason, I would absolutely consider this to be a grand tourer. The classic formula is there: big engine in the front, luxury in the middle, boot at the back. On the motorway it just eats up the miles. The 10-speed gearbox means that at 70mph, you’re cruising along at just 1400rpm. There is no stress to the experience whatsoever.

It doesn’t encourage you drive it quickly, either. It doesn’t feel fast even when you’re going fast, so smooth is the ride, and it doesn’t have an aggressive personality like some of its competitors. The LC500 does its own thing in every regard.

It grew on me with every mile covered on these trips. There’s plenty of power to keep you moving forward and plenty of creature comforts to keep you relaxed. I should also mention the Mark Levinson audio system here, too, because it’s magnificent. I was lauding the Bowers & Wilkins system in the McLaren GT in the last review, but then along came something even better! It’s an optional extra, but if you’re getting one of these, it’s a box well worth ticking.

Like all GTs there’s a bit of compromise involved here. The boot is 191 litres, which isn’t huge, but there’s enough room to get your suitcase in there. The 2+2 seating arrangement also provides auxiliary storage because, realistically, you’re not going to be transporting your associates on a long journey in the back. It’s cramped for leg room, but it does have Isofix if you’ve got small children.

Having a 5.0-litre V8 also means that you’re also compromising a bit on fuel efficiency. I got 22.6mpg over the course of the week. This is mitigated by an 82-litre fuel tank which makes driving from London to Edinburgh without stopping a realistic proposition.

You can play around with the powertrain to improve your efficiency, too. Putting the LC500 into eco mode keeps the revs as low as possible. Putting it in sport, it only uses eight gears and tries to keep you near to 3,500rpm, which is where the power delivery starts to really pick up.

For an engine that sounds this good and delivers as much midrange performance as it does, however, the fuel efficiency is perfectly acceptable. The LC500 is also available with a hybrid set up, which will return over 30mpg. There’s no rumbling V8, though.

In a market saturated by bland cars, the Lexus LC500 stands out in a positive way. It looks unique and that should be applauded. It also has its own distinct character provided by the V8, and the build quality and layout are spot on. It feels comfortable and robust.

You need a bit of time to come to understand this car. It’s not an uncouth B-road basher and if you’re looking for thrills, spills and savage performance, then this isn’t the car for you. It’s a majestic long-distance runner that deals with everything in a composed manner. Once you come to accept its character, it’s a rather wonderful car.

The infotainment system is an irritation, but the overall package more than compensates for that. If nothing else, it’s worth having just for that engine. You would happily jump behind the wheel of this and stay there for hour after hour. If you’re looking for comfort, refinement and enough performance to keep you interested, then this is a near perfect car.