Like all good grand tourers, you’d happily get behind the wheel and drive for two hours just to get a coffee. 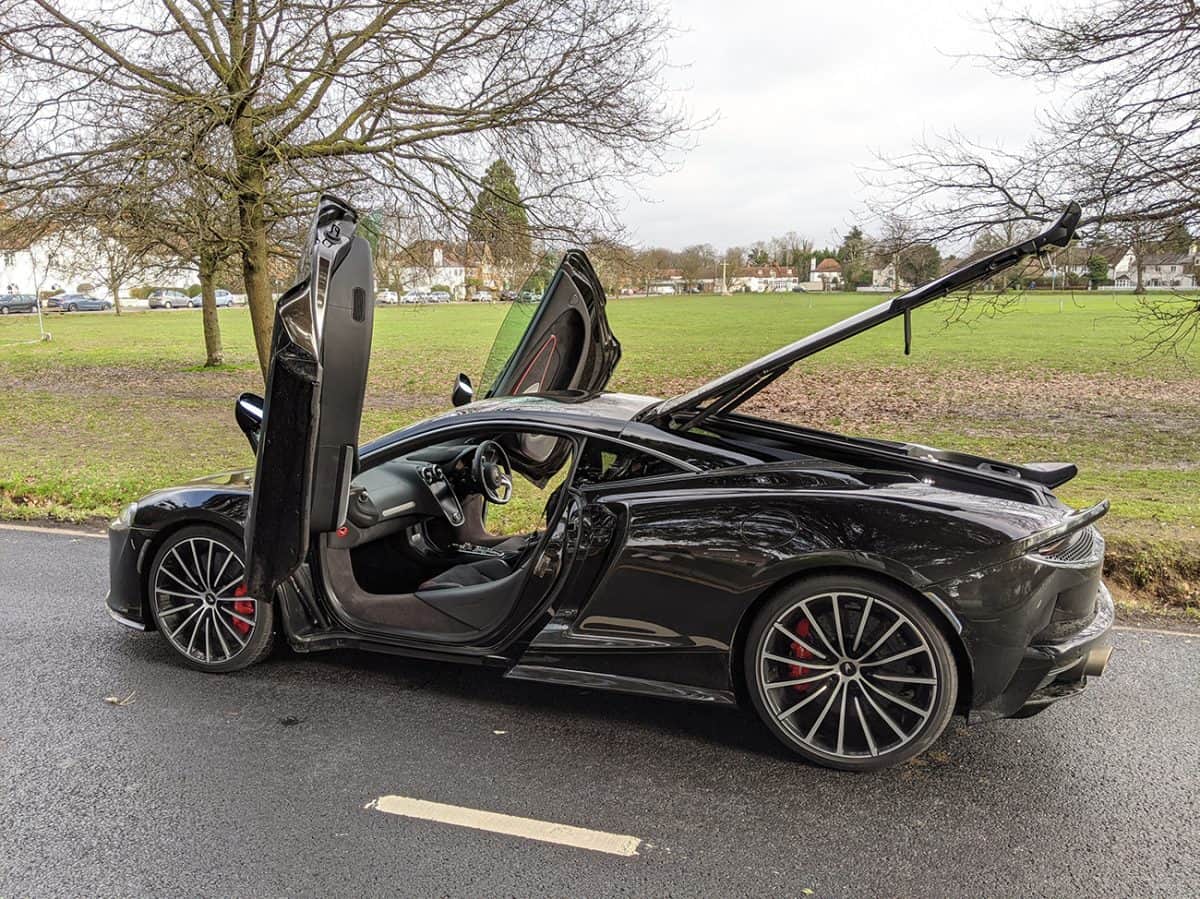 The GT is a car that McLaren promises will redefine the concept of a grand tourer – it packs plenty of power and good looks, but is it really a grand tourer?

Grand touring, as a concept, is very much off the agenda at the moment. You’re only supposed to nip out to the shops for essentials, not boot it down to the Cote d’Azur for sun, sea and fine wine. You’d struggle to make it as far as Dover. More generally speaking, are lengthy car journeys on the agenda anyway in this age of cheaply and readily available flights? With that in mind, is there scope for reimagining a concept that is so ingrained in the automotive psyche?

The traditional grand tourer features a whopping great engine in the front, an ocean of opulence in the middle and a boot in the back. It’s a tried and tested formula that has stood the test of time. McLaren, though, reckons that now is the time to try a different approach.

The McLaren GT promises to redefine the concept of the grand tourer. The GT, however, is unmistakeably McLaren. The DNA from the rest of the range is there in its looks. It has dihedral doors. The 4.0 litre twin-turbo V8 produces 612bhp and propels you down the road at a fair old rate; 0-60 can be dispensed with in a mere 3.1secs and it’ll keep on pulling all the way to 203mph. So far, so McLaren. And that’s not a bad thing.

But is it a grand tourer thing? The McLaren GT has split opinion like few other cars recently and that’s almost exclusively because of the name. The traditional concept of a grand tourer is to waft along in luxury, a near silent cabin being ushered towards the horizon by a huge engine in the front. A sense of savagery and theatre is not front and centre of the design brief.

McLaren has ripped up the rule book in creating its take on the grand tourer and the results, at the very least, get you thinking. Is this a car that brings comfort and practicality to the supercar arena, or is it one that brings performance and driver engagement to the GT arena? The answer is a bit of both.

To suggest that this a practical supercar is to almost damn it with faint praise. A lot of thought has been given to how the GT can approach things differently. It’s mid-engined and doesn’t have those rear seats. The emphasis is on the driver. This means that the GT weighs only 1,530kgs. That’s getting on for three quarters of a ton lighter than some of the competition.

This results in an extraordinary driving experience. There is a waspish, go-karting quality to the GT. With the engine behind you, you can feel the revs rising through the base of your seat and the steering in this car is an absolute joy. It gives you all the feedback you want, helping you to feel completely dialled into what the car is doing and your inputs to that.

The gearbox, too, is a joy. I don’t usually use the flappy paddles behind the steering wheel, relying on the car to select the right gear quicker than I ever could. In the GT, however, the shifts are instant, helping you get exactly what you want from this car, be it cruising along softly or indulging in a moment or two of hooliganism. Popping down through the gears, the engine purrs its approval.

Capable of showing the competition a clean pair of heels out on the road, this is where the McLaren begins to show the compromises that stir up the conversation. It doesn’t have a conventional boot, with 150 litres of storage space under the bonnet coupled with a long, shallow shelf behind the driver’s cabin which is separated from the engine by some heat resistant material. It still gets warm back there though, so best to transport the picnic in the front storage.

I did the big shop in it and got everything in easily enough. It’s an unusual layout, but one that you’d quickly become accustomed to.

The infotainment system is easy and intuitive to use but the cabin wants for a bit of extra storage for your bits and pieces on longer journeys.

The car also lacks overall driver aids such as adaptive cruise control, lane departure assistance, adaptive head beams; all things that you might look for on a longer run. The seats are accommodating enough, although there’s no massage setting to ease out those back aches on those same longer runs.

This is the point at which the McLaren GT starts to ask serious questions – are these things you really need from a car? To some, these are very important and I get that, but this is a very different experience to driving, say, a Bentley Continental GT, to the point that they only really share the GT moniker. The McLaren comes from a different angle entirely.

In terms of the driving experience, McLaren has been clever with the ride and power train settings. In its most muted settings, the GT is soft and handles speed bumps and potholes surprisingly well. It’s not half as jarring you’re expecting and it doesn’t feel like it’ll fall apart when you go over something. It’s also quick without being terrifying in this setting. And the fuel consumption is surprisingly good, too. On a trip to Arundel and back from Walton, I achieved a very respectable 28.5mpg.

The model tested came with the practicality and premium options and these deserve a mention because they are necessary additions. The practicality pack adds parking sensors and a rear-view camera, which is a must, along with the ability to raise the suspension to improve ground clearance to a level equal to a Mercedes C-class. The premium pack adds LED headlights, an electronically powered rear tailgate and the Bowers & Wilkins sound system, which is incredible, so it’s worth ticking that box for that alone. Seriously, it’s one of the best factory fitted in-car audio systems I’ve heard.

As always, I sought to pit the McLaren GT against a range of road conditions, such as one would expect on a grand tour. It handled them all superbly. Where it really came to life was on a trip to the Chilterns to Benson. The country roads brought out the best in the McLaren GT, with an opportunity to explore some of the performance and handling on offer. It just grips through corners, enabling you to place it with supreme confidence and use the performance as required, with absolutely minimal body roll. The composure offered is astonishing.

Unlike others in this genre, the GT doesn’t deliver loads of torque low down in the rev range – you have to work for the performance. This is a good thing, with power kicking in at 3,000rpm and lunacy at 6,500rpm, with the red line arriving at 9,000rpm. It means that the car is quick enough to keep up with your thought process, especially when you bring the flappy paddles into play and drop it down a couple of gears. You have to be quite deliberate to unleash all 612 horses.

A two-hour round trip on a Friday afternoon to have a coffee by the Thames in solitude may seem frivolous, but in the GT I’d happily spend every Friday afternoon I have left doing just that. For good measure I did the same down to Arundel on the Saturday.

On the motorway the GT is very composed. It’s not as quiet as others, but the pickup in acceleration from mid-range speeds is where you remember that this is a supercar at heart. It’ll do 60mph – 124mph in 5.9secs. Who wants that to be a quiet experience anyway?

Whilst the McLaren GT may not entirely redefine the grand tourer concept, it at the very least offers a very distinct proposition. Compared to others of the genre, what it lacks in comfort and refinement, it makes up for in driver engagement and theatre.

So, do you really need two extra seats? Do you really need a conventional boot? Do you need all the driver aids and fancy trim? These are questions to ask yourself; to some people the answers will be yes but to others, having a practical supercar will no doubt appeal.

Whilst it might not change your perception of what a grand tourer is or should be, the McLaren GT will at least put a smile firmly across your face every time you’re lucky enough to drive it. Like all good grand tourers, you’d happily get behind the wheel and drive for two hours just to get a coffee. If that isn’t a very modern take on a grand tour, then I don’t know what is.