Bringing Aston Martin elegance and sporting credentials to the SUV arena, we find out how the Aston Martin DBX works as a lifestyle car 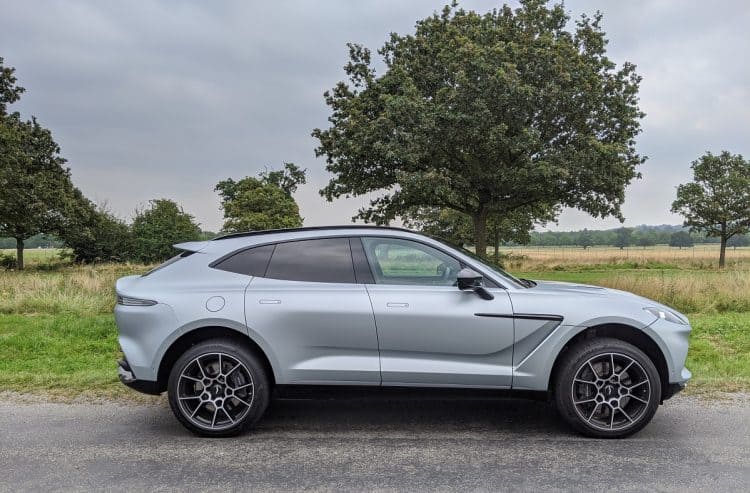 SUV sales account for anywhere between a third and half of all new car sales in Europe, depending upon who you believe. Where Porsche led the way with the Cayenne and Bentley honed the concept with the Bentayga, now almost every high-end car marque is producing SUVs. Every single one is realising record sales, too. The commercial imperative is obvious, but how well does the prestige of a brand like Aston Martin translate into this ultra-competitive landscape, with the introduction of the Aston Martin DBX?

This is the company’s first attempt at an SUV. It promises to remain true to the sporting soul of the marque that is so synonymous with James Bond and the production of stunning cars such as the Aston Martin DBS.

Aston Martin DBX – an Aston for every occasion?

SUVs are necessarily compromised. The amount of engineering brain and brawn required to conceive and build them is astonishing as they grapple with being at once comfy, luxurious, fast and entertaining. Oh, and being capable of doing a spot of serious off roading. The Aston Martin DBX, in a nutshell, must be all things to all drivers. That’s a tricky brief to nail.

The Aston Martin DBX certainly looks the part. The rear end is shared with the Aston Martin Vantage and it really works on the broader shell of an SUV. The sweeping lines from front to back aren’t overly aggressive and the greatest compliment you can pay it is that it looks like an Aston Martin.

It’s also quite subtle. Yes, it’s a great hunk of an SUV riding on 22” wheels (on the model tested), but if such things can be subtle, this is. It’s more understated and better looking than some of the competition. You could park up outside the country club or do the school run and the DBX will blend in seamlessly. If you do want to attract a bit of attention, however, the 4.0-litre twin-turbo V8 is well capable of making itself heard.

Inside, there’s loads of room, great finishes and the infotainment is a step in the right direction over the DB11 and DBS. There’s no touch screen, but the system is very easy to use and you can connect your phone which, really, is all anyone does these days anyway. Elements like heated and air-conditioned seats, a full length panoramic roof and a bespoke sound system add touches of luxury.

If you like SUVs, then the DBX carries undoubted aesthetic appeal; it’s every inch a luxury SUV with all the trimmings of comfort and practicality you’d expect. But it’s an Aston Martin, so you’ll doubtless also be interested in the driving dynamics at play.

The V8, borrowed from AMG, produces 550PS and 700Nm of torque. 0-60 is dispensed with in just 4.3secs. The model tested came fitted with the optional sports exhaust to add an extra layer of theatre. On paper too then, the DBX is every inch an Aston Martin.

The nine-speed gearbox works unnoticed when the DBX is in GT mode, its most relaxed setting. Flick through Sport and Sport+ and it will hold the revs higher up the range for longer as the DBX begins to strain at the lead a little.

There’s no shortage of straight-line poke. It can take a moment to gather itself, particularly from the lower end of the rev range. Once it hits the torque band at 2,200rpm, though, it really takes off. Sporting credentials, however, will always be measured on the twisty stuff.

Can you enjoy the Aston Martin DBX?

The Aston Martin DBX doesn’t let itself down. There’s a bit of body roll, as one would reasonably expect, but there’s plenty of traction and you get a good sense of connection with the road, particularly in Sport and Sport+ modes. With the ride firmed a little, you can start to lean on it and, dare I say it, have a good time.

If you’re so minded, you’d enjoy a track day in the Aston Martin DBX. The steering is precise but, the DBX being a luxury SUV, isn’t the final word in feedback. You can easily thread it along a decent B-road though and there are three different settings (GT, Sport and Sport+ again) to play around with.

What about normal driving?

An SUV, of course, is never purchased in the search of pure thrills and spills. It must also perform the mundane. The good news is that you can get your cricket bag in the back, plus those of your all teammates and still accommodate five passengers with ease.

The Aston Martin DBX takes the everyday scenarios you’ll put it through in its stride. Potholes and speed bumps are dealt with easily. Sitting in traffic is okay, too, with the double-glazed windows keeping things quiet. They do the same at motorway cruising speed, with the engine burbling along at c.1800rpm so as not to intrude on the cabin.

On longer journeys, the Aston Martin DBX is a fine and unfussy companion. It’s content to glide along, with adaptive cruise control and lane keep assist on hand. It’s also content to press along a bit, too. From 50mph, the acceleration is brisk. You’d have no complaints on a long motorway cruise, with the suspension softened up in GT mode.

Other touches Aston Martin have added to the DBX include a self-parking function. This is handy if you’re nervous about pulling off a reverse parallel park and curbing those wheels. It’s not a small car, so such a feature is a welcome addition.

Other family touches include Isofix in the rear seats and four-zone climate control with heated and air-conditioned rear seats as well. Rear leg room is plentiful, too, so there’ll be no complaints.

The only major gripe with the everyday driving experience is the way in which it picks up speed. It can feel a little too urgent from standstill, being more aggressive than you’re intending to be. It can also, once you’re up and running, feel as though you’re hardly moving. A quick look at the digital display can reveal rather surprising readouts. A head up display would be useful.

Overall, however, it’s a very accessible car. It feels smaller than it is it when you’re driving and the interior is well appointed. It’s an easy car to live with and, when the conditions are right, it’s an easy car to enjoy, too.

You could conclude that the DBX is a reasonable first attempt at an SUV. Or even that it will simply do what it has been set out to do – generate revenue for Aston Martin. The DBX, however, is an impressive car.

It has its own unique character. It’s not as focussed on luxury and refinement as the Bentayga; it’s not as brutal as an RSQ8 or a Levante Trofeo. It sits nicely in the middle, offering a distinct proposition.

It’s luxurious and comfortable, whilst also having sporting credentials for more spirited driving. You can veer towards the extremities of both ends of that spectrum in the SUV market. The Aston Martin DBX puts its hand up in the middle.

For a first foray into the SUV arena, it’s impossible not to be impressed with what Aston Martin has produced. There’s certainly something for everyone without fatally compromising everything. Of course, there is a well established SUV blueprint to follow, but it’s very easy to get these things wrong. Aston Martin hasn’t, whilst at the same time producing something distinctive and something that is, unmistakeably, an Aston Martin.