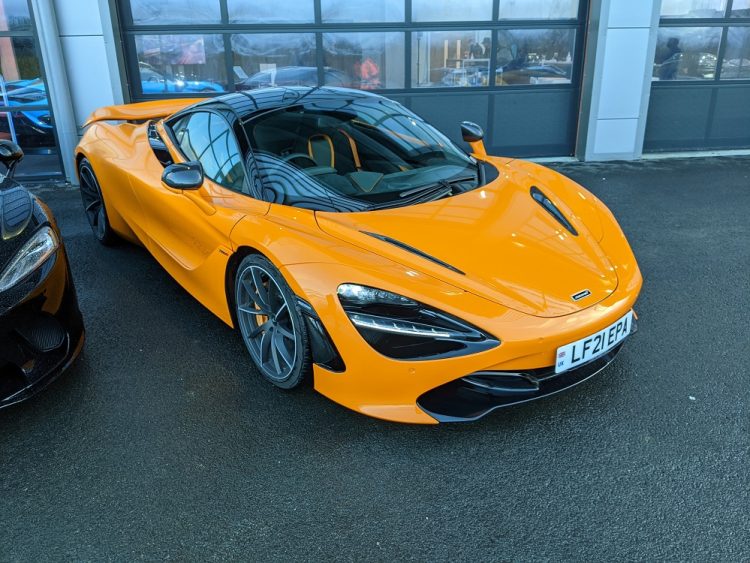 We often talk about the use case for cars in the ‘real world’. The trouble with the real world is that it can be encumbering and dull. It’s full of speed cameras, speed bumps and poorly constructed roads, scarred by years of shoddy utilities work. Then there’s the fact that everyone drives at 20mph these days. When was the last time you saw someone overtake? It’s a lost art. Supercars, therefore, are somewhat lost in the real world. But what of the opportunity to take something like the McLaren 720S away from the real world and onto a circuit?

Plodding through the 50mph average speed zone on the M1, devoid of anyone working on it, on the way to Millbrook was a million miles from what was to come. Driving a McLaren 720S in this environment is like keeping a tiger in a cage. Sure, it’s good to look at it, but there’s an undeniable sadness. Still, I wasn’t in a McLaren 720S at that point and was buoyed by the prospect of events to come. 50mph had never felt so slow.

The only cause for trepidation was the atmospheric presence of a light drizzle. This, after all, was the Midlands. What else could be expected? Still, there’s the nagging doubt in the back of your mind about doing some serious damage to someone else’s supercar.

What’s the McLaren 720S like away from the real world?

As it transpired, I needn’t have worried. McLaren had thought about the prospect of letting a numpty like me free in a McLaren 720S. I was assigned one of their professionals, Mitchell, to ride along with me.

Yet, there’s nothing outright intimidating about the McLaren 720S. It’s a remarkably accessible car. The butterfly doors make ingress and egress straightforward. You drop down into a welcoming cabin and everything is simply laid out.

Starting up in Comfort mode, the McLaren 720S pulls away serenely with minimal fuss. The 4.0-litre twin-turbo V8 makes itself heard but isn’t overbearing. We’ll review the McLaren 720S on road a bit later in the year, so will get into the nitty gritty of the drive modes, infotainment and real-world use case then.

Millbrook was about letting the McLaren 720S off the leash. First, then, to the Alpine route. A twisting, undulating circuit designed to recreate an Alpine pass just off the M1. As a sighting lap, running the 720S round the circuit in Comfort mode quickly inspired enough confidence to reach for the dials and select Sport. The V8 becomes a more prominent companion and throttle response sharpens. Go on then, into Track mode.

The binnacle in front of you rotates to simplify the view to just your revs and speed. You don’t want any distractions when life is coming at you this fast.

What’s remarkable is that you don’t need to be an amazing driver to really enjoy the McLaren 720S (although it probably helps). The ride is firm but communicative. Visibility is sensational. The driving position is spot on – low with the steering wheel coming at your chest. The pedals are positioned immaculately. Then there’s the steering…

McLaren still deploys a hydraulic steering rack. Most have gone towards electronic racks in the search for efficiency. This means that McLaren has an edge. Their steering feel is unmatched.

The McLaren 720S is alive in your hands and you know exactly what is going on beneath you. With a perfect driving position, a brilliant view, a communicative chassis and steering full of feedback, you feel truly connected with the car and road. Again, you don’t need to be a professional race driver to appreciate this. It feels wonderfully simple and connected.

To lean on a quote from Dutch football legend Johan Cruyff; “Playing football is simple, but playing simple football is the hardest thing there is.” The McLaren 720S feels simple, yes, but this car is anything but. It’s just been engineered in such a way to make it accessible, enjoyable and straightforward.

In Track, you can fully utilise the 720PS (hence the car’s name), or 710bhp in old money. It races from one apex to the next, positively bursting out of corners. Threading it into the next, the McLaren 720S is well composed, without any body roll to take note of. It handles superbly, even in dank wintry English conditions. There was definitely more to be drawn from it, but four laps were quickly up.

The visibility deserves another mention because the thin pillars and astute driving position give a brilliant view out. You intuitively know where the front wheels are. It’s not dissimilar to that provided by a van. That’s the only time you’ll hear a McLaren 720S compared to a Transit, but I mean it as a compliment! From such a low-down position it really does offer a commanding view of the road ahead. Great visibility isn’t something you’d necessarily expect of a supercar.

Another feature of Millbrook is it’s one-mile straight. Perfect for testing the McLaren 720S’s 2.8sec 0-60mph time. Except, on a damp day that’s not possible. Aggressive acceleration off the line only unearthed a load of wheel spin. Aggressive acceleration at 90mph changing from third to fourth gear, also revealed a load of wheel spin. Best, therefore, to ease the McLaren 720S into its work in such conditions.

One thing that this run revealed in the McLaren GT was a relative running out of steam at 140mph. I did suggest that this review was divorced from the real world, where obviously that’s not a concern.

The McLaren 720S, however, suffers from no such impediment to its progress at such speeds. 140mph and its cigars out, taking it all in its stride. Sailing through 150mph and onto 160mph, it was obvious – and startling – that the 720S had more to give. A lot more.

Owing to the physical constraints of one mile of tarmac, it was time to give the brakes a proper run for their money. On the Alpine circuit they were easy to modulate and easy to trust. What about stopping a car from such lofty speeds?

Yeah, no drama. The McLaren 720S will come to a standstill from 70mph in 40m dead. 40 metres! The stopping power is enough to make it feel like your eyes might shoot out of your head. The air brake comes into play, protruding from the rear to assist the carbon ceramic brakes fitted to the wheels (390mm front, 380mm rear).

The Highway Code states that this needs to be done in 96m. The McLaren 720S can stop from 124mph in 106m. It’s not just its acceleration and handling that are off the scale.

The McLaren 720S doesn’t disappoint in the fantasy land it was probably created for. It looks every inch a supercar and performs like one in every department. And yet it’s also a very approachable car. There’s nothing outright intimidating and in its softest setting it’s a pliant and more comfortable car than you’d expect.

It was surprisingly easy to get to grips with and settle into a rhythm in. Yes, the acceleration is savage and you can really throw it into corners, but you can do it at a much faster pace than you’d anticipate after only a few moments with it. The 1419kg kerb weight adds to the lithe feeling of the car. It feels lean and mean.

You can also drive it your way. The seven-speed dual clutch gearbox does a good job in automatic mode, or you can set it to manual and bring the flappy paddles into play. Whichever path you choose, you’ll enjoy it.

As ever with McLaren, the final word rests with the steering. If you crave feedback, there’s nothing better. The only better setup that I’ve experienced was in the McLaren 620R. You can plot your course and find the apex of each corner with consummate ease, brimming with confidence that the McLaren 720S will go exactly where you intend it to go. That, ultimately, makes it such a brilliant car.

Related article: McLaren GT review – we take it on track to see what it’s like