We’ve tested the McLaren GT on the road, but what’s it like on track? We headed to Millbrook to put it through its paces. 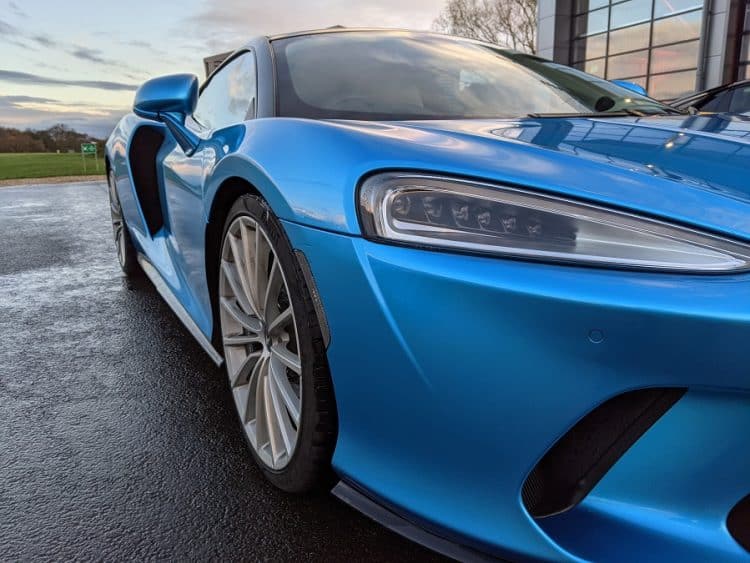 We’ve already reviewed the McLaren GT as a GT. On the road, we concluded that it was between being a supercar and a grand tourer, being a practical supercar. It’s designed to redefine the longstanding concept of the GT: big engine up top, opulence in the middle, boot in the rear. The McLaren GT asks pertinent questions as to whether or not you need a 2+2 seating arrangement; most are too small to fit human beings in the back anyway. Away from that, however, how does it work as a supercar? An invitation to Millbrook Proving Ground offered an opportunity to find out.

The McLaren GT doesn’t compromise on performance. This means that it’s too fast to properly push and prod on a public highway. A twin-turbo charged V8 provides some 612bhp. 0-60mph is done with in 3.1secs. It weighs a smidge over 1500kgs. That means it is, arguably, also too fast for a novice like me.

So, how manageable is a modern supercar in the hands of someone possessed only of a standard UK road licence? To cover this obvious ineptitude, McLaren didn’t send me off round Millbrook alone. Thankfully one of their racing team, Mitchell, was in the passenger seat to make sure everything was in check.

A light drizzle graced the Midlands air. When does it not? The great thing about the McLaren GT is that it’s a very accessible car. There’s nothing outright intimidating about it. In its softest setting, it doesn’t bristle with aggression, making it easy to get to grips with. We were here for aggression, though, not good manners and a pliant ride.

The Alpine track at Millbrook was the first port of call. With dramatically undulating and tight, twisting roads, it simulates, well, an Alpine pass. The Mclaren GT feels light on its feet as you start to ease it into its work. An initial lap acted as a sighter, an opportunity to work out the car and the route.

On the second lap, with the settings ramped up, the McLaren GT immediately felt more eager. There’s arguably a GT car in here, but there’s definitely a performance car. Initially tentative across the greasy surface, once you lean on it a bit you discover a confidence inspiring car.

There’s scarcely any body roll and you expect the traction to break at any moment, but even in sub-optimal conditions there’s no hint of it losing its composure. Even if you are a bit reluctant with the power into the bends, shooting out of them is a breeze and you’re quickly on the brakes for the next bend. The brakes, as they must be, are excellent. When I overcooked the approach to one corner, they covered my error easily.

The steering in the McLaren GT, as it is in all McLarens in truth, is a real strong point. McLaren still deploy a hydraulic steering setup rather than electric systems preferred by almost everyone else. This is to improve feel, which it undoubtedly does. You know exactly what’s going on at the wheels through your hands, which makes it so easy to place. It’s also easy to get a sense of where the boundaries of the traction are.

Over the more dramatic crests the car goes light in your hands before hunkering down again. You can then almost telepathically place it into the next bend. Finding the apex is simple.

With the engine situated behind you, you can hear what’s going on as regards timing your gear changes. With corners coming thick and fast, there’s not always time to glance down at the binnacle, so you have to rely on your instincts rather than a reading on a screen. That said, with no long straights to push the redline, this was never too much of an issue. Probably just as well.

The response to the requests you make via the flappy paddles are pretty much instant. Call for a gear and click, there it is. It’s a rewarding gearbox to work manually on the road, too. More often than not the auto box will do a better job than I could, but the McLaren GT draws you into the experience. It means that you can get exactly what you want from the car when you want it.

As you’d reasonably expect then, the McLaren GT made mincemeat of the Alpine route, even in the hands of an ordinary driver. So, you can get your golf clubs in and enjoy a track day…

It was too damp to put the 0-60 time firmly to test. 3.1secs would’ve been impossible. On one run of the mile-long straight Millbrook, flooring it in first drew a lot of wheel spin and lateral movement. Not something you’d want on the road. Easing the McLaren GT through the gears, however, gave the opportunity to push the speedo well beyond three figures.

Keeping the acceleration steady into fourth gear, you click into fifth and floor it. There was wheel spin in every other gear under heavy acceleration given the conditions, but once past about 120mph this was no longer an issue. Yikes.

It was then just a case of how fast you dare go before you run out of road. 151mph was reached with minimal fuss before it was time to back off.

This also gave an opportunity to give the brakes a working over. From 70mph the McLaren GT feels like it stops in no time. With your internal organs thrust towards the windscreen, you come to a standstill in not much more than 40-metres. For context, the Highway Code states this needs to be done in 96-metres. From 100mph it’ll stop in just over 90-metres. Does that mean you should be allowed to drive a McLaren GT at 100mph on the motorway?

In terms of power delivery, the McLaren GT is remarkably consistent up to about 140mph. At that point it does just start to plateau, although that’s comparing it against a thoroughbred from the same stable, the McLaren 720s (more on that in a later review). The GT gets from 0-140mph in 12.2secs, then the next 30mph takes a further nine seconds. That seems like an eternity given the rapidity lower down. For reference, the 720s covers 140-170mph in 4.7secs.

Still, that’s not performance you’re likely to ever need. In the real world, or on track, there’s more than enough to keep you occupied.

I was impressed with the McLaren GT on the road an it didn’t disappoint when the opportunity arrived to free it from the shackles of speed limits. It feels lithe and sprightly. When pushed and prodded, it comes to life. The McLaren GT is as happy being used in mundane road settings as it is on track, though. You could happily drive it to the track, race it around, then drive it back home. It covers most eventualities.

Purer supercars are available. More practical and softer GT cars are, too. What the McLaren GT achieves is its own niche in the middle. It’s got enough power to keep you entertained and enough practicality to render it usable. You can use it on track, you can use it for a trip away. Whichever setting you put it in, the McLaren GT excels.