The Tesla Model 3 Performance is lightening fast. You already knew that. But it also adds a surprising layer of practicality and usability 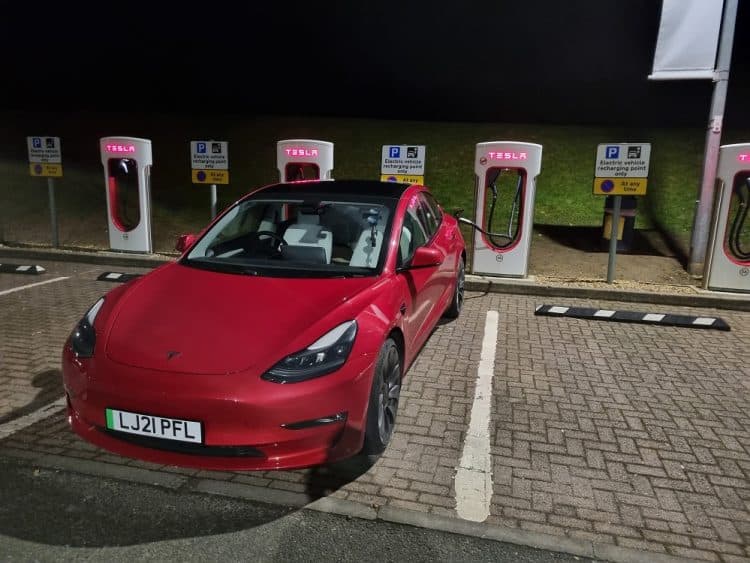 Ask anyone who hasn’t owned an electric vehicle what their biggest fear of owning one is. Range anxiety will feature high up the list. The ubiquitous presence of petrol stations on our roads simply isn’t matched by charging stations. New charging stations aren’t keeping pace with demand, either, meaning that home charging is essential to ownership. The arrival of the Tesla Model 3 Performance for a week presented an opportunity to stare down my own range anxiety. A trip to Liverpool was locked in. I get twitchy when the fuel gage hits one-quarter full. A deep breath and a full charge – it was time to confront my fears.

So much of car ownership is based upon ‘what if’ scenarios and fantasies. Supercars will do 200+mph. So what? SUVs will take you to the top of Snowden. So what? The range in some EVs is c.100 miles. So what?

In reality, these things don’t matter. The average car journey in the UK is, according to the Department of Transport, 8.4 miles. In all probability, that journey won’t require speeds in excess of 200mph or the need to scale a mountain. Of course, variables beyond the average exist. We know that EVs work for short journeys such as commuting and the school run, but if we extend their reach, what’s the outcome?

My own personal ‘what if’ scenario involves going to the football. It often necessitates long journeys. Walton-on-Thames to Walton in Liverpool is exactly 222 miles. The range in the Tesla Model 3 Performance, when it’s fully charged, is 340 miles. Except, you know, it isn’t. Overnight temperatures of zero-degrees robbed me of six miles without doing anything.

So, I departed with 294 miles available having parked up with 300 miles available 12 hours previously. Stops were inevitable with some 450 miles of driving in the day ahead. The sat nav onboard the Tesla Model 3 Performance’s 15” screen factors in stops for you. Keele services would be our next stop.

I was keen to find out how the Tesla Model 3 Performance responded to what I would consider ‘normal’ driving. That’s to say, not being frugal for the sake of being frugal. Drive like a feather-footed Mother Theresa on a warm day and sure, 340 miles from a charge might be doable. But what if you push on a bit?

Obviously, this ate into the range. It ate into the range sufficiently to dent my confidence in reaching Keele. Warwick services provided the opportunity for a quick pit stop and a coffee. In the time it took to use the facilities and buy a flat white, 55 miles of range had been added. This meant that we reached Keele with 84 miles range left. Covering 168 miles had used 260 miles of range.

A 26-minute stop at Keele added a further 150 miles of range, which safely got us to Liverpool.

Following an appalling game of football, it was time to trudge home. These what if fantasies can quickly turn sour. All the things I could’ve done with my Saturday…

The return journey was much the same. Two stops totalling around 35mins and I was home and hosed with enough range to go about my more average activities. The return journey offered more opportunity to focus on the car itself. My range anxiety had been assuaged.

Long journeys tend to reveal a lot about a car. If you’re pining for the journey’s conclusion, then it’s perhaps not the best companion. The enforced breaks throughout the day neatly broke up the journey. I’m more likely to brim the tank and settle in for 222 miles of uninterrupted driving than I am to stop every 100 miles for a break. But the Tesla showed me another way.

It’s not necessarily one I’ll adopt, but I appreciated the change. If you’re a regular stopper, or possessed of a weak bladder, then the Tesla Model 3 Performance will slot seamlessly into your long-distance odysseys.

The Tesla Model 3 Performance is an exceptionally easy car to drive. The one thing Tesla has absolutely nailed with the Model 3 is its usability. Everything works in real world settings. Need to shoot off the line because you’re in the wrong lane? Make a gap? Pull out onto a busy carriageway? The Performance packs such a punch that it’s laughably easy.

0-60mph is ticked off in 3.1secs. It’s not even that that’s so impressive, though. 0-40mph arrives in under 2secs. You can pull out anywhere – pin the accelerator and off you go in an electrical wheesh. Throw in Spotify, excellent sat nav, playful touches such a whoopie cushion and a karaoke machine, and the overall package is an appealing one.

But what’s the Tesla Model 3 Performance really like to drive?

Okay, so you’re not buying the Tesla Model 3 Performance to gently breeze around in. This car packs a serious punch. The dual motor set up provides 475bhp. On paper, that doesn’t sound a great deal in this day and age, but the performance is savage.

This brings my other ‘what if’ scenario into a play: an open stretch of decent B-road. This is the Performance, after all. Does the name write cheques the car can’t cash?

We reviewed the Tesla Model 3 Long Range last year and from a dynamic perspective, it was a little lacking compared to combustion engine equivalents. Whilst the same is still relatively true here, the Model 3 Performance is eminently usable – dare I even say enjoyable – along a B-road. The lack of steering feel holds it back, but the steering is otherwise pinpoint accurate. There’s also so much traction to work with. It holds on through corners astonishingly well.

You can set up where the power goes – RWD is possible for drifting – and this does help in setting up and enjoying the car. With a balanced set up, it’s a confidence inspiring drive.

This again comes back to how well the Tesla Model 3 exists in the real world. It would doubtless come up short against something like an Alfa Romeo Giulia Quadrifoglio (as a comparable performance focussed family saloon) on track, but that’s a narrow use case example. It’s also £10,000 cheaper.

A lot of people have quipped that you’d get bored of the Tesla Model 3 Performance and its 0-60 in 3.1secs trick. I must say, I’m not convinced that you would. The availability of all that power, knowing that it will be delivered easily, brings a smug feeling. You will beat anything off the line.

Tesla has got a lot of things right. The Tesla Model 3 Performance is practical, comfortable and competitively priced (model tested is £66,590) compared to equivalents. The lack of options makes buying one easy. The colours are a bit dull, sure. The red seen here is £2,100. White is no cost, which explains why you see them in white all the time. A jazzier, even more customisable, palate might enhance their appeal.

You get a well-equipped interior and everything is controlled through the screen. If you like physical buttons, then you’ll have to look elsewhere.

By far and away Tesla’s biggest success, however, is its supercharging network. It wipes the floor with everything else. We range tested the Audi e-tron S last year on a family holiday to Cornwall. It was straightforward enough, but Tesla are streets ahead of the rest. Their chargers are clean and well maintained and, crucially, present in abundance. So often en route to Liverpool there were banks of Tesla chargers and only two available non-Tesla chargers. That’s a major issue for the competition. If you’re doing regular long journeys, Tesla’s the only EV to really recommend. Splash, dash and revel in the performance.

For everyday use, there’s little to fault. My only gripe was with the enhanced auto pilot. It’s basically lane keep assist, present as standard on so many cars, but priced at £3,400. At around 5% of the cost of this car, the easy answer is don’t tick that option. But that’s it. Everything else works well. Most pertinently, everything else works well in 99.9% of the circumstances in which you’ll use a Tesla Model 3 Performance. Its real-world appeal is difficult to overlook. Transport the family, get the shopping, race supercars – all in a day’s work.