The BMW i4 M50 represents the M Sport division of the famous German marque’s first foray into EVs. Does it justify the badging? 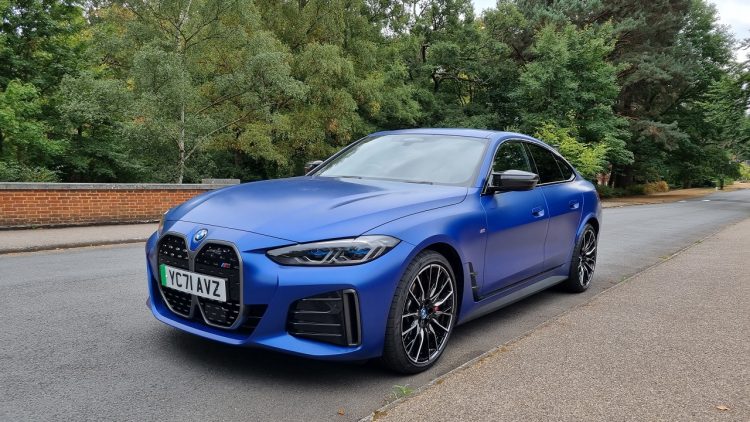 After a couple of false starts, BMW is back in the EV game. False starts, actually, is an unfair way to refer to the i3 and i8 (even if the latter was a hybrid), they were simply ahead of their time. Digital cars in a still largely analogue automotive world. That brought with it first mover disadvantage. Small batteries meant small range married to a near non-existent charging infrastructure. People didn’t have home chargers in 2014, either. It was the dark ages back then. Whilst the i3 has been given larger batteries over time, BMW is now properly in the EV market with a range of models from the iX to the i7 to the model tested here, the i4. This, however, is a line in the sand, for this is the BMW i4 M50. The famous ‘M’ prefix has been fitted to an EV for the first time.

Now this has caused some consternation among M Sport enthusiasts. There have been howls from some quarters about how this cannot possibly be considered a proper M Sport car. The times they are a-changin. What does M Sport stand for? To many, driving dynamics as much as speed. The BMW i4 M50 ticks off the latter aspect comprehensively. Its 80.7kWh of usable battery capacity produces 544hp and propels the BMW i4 M50 from standstill to 60mph in a brisk 3.7secs. Yeah, it’s not slow.

The area of debate, therefore, moves on to the driving dynamics. Can a car weighing 2290kg before anyone’s got in it provide the thrills and spills of an M3 or an M4?

As a point of comparison, the BMW M4 weights 1725kg. That extra 565kg is significant. Batteries, put simply, are really heavy. How far does this affect the dynamics? Along a B-road, the BMW i4 M50 flows pleasingly enough. There’s body roll to work with, a communicative enough chassis and accurate steering. The weight and sharpness of the steering are affected by the drive modes, from Eco Pro, Comfort and on into Sport and Sport Boost.

Sport Boost unleashes all 544 horses and it’s quite the experience. Whilst the 0-60 time is comparable with something like the Porsche Taycan 4S, it rears its front end like a horse that’s been tasered before wildly galloping towards the horizon. There’s a sense of muscle car about the experience. All four wheels grope at the tarmac in search of traction, torque steer drags it slightly off line then suddenly, you’re doing 60mph. It’s a wild ride.

So, the BMW i4 M50 has no issues negating its weight in that respect. It’s only when you really fling it into a corner, for example at a roundabout, that the weight unmasks itself. You can only conceal 2290kg up to a certain point. That would certainly count against it out on track.

On road, however, I rather fell for the BMW i4 M50. It handled everything I needed it to handle with aplomb. Stick it in Eco Pro and it sails serenely along. Even in this mode, there’s plenty of grunt to call upon and you can make most cars appears smaller in your rear-view mirror with haste.

Press the Sport button beside the drive selector and everything livens up. A fast car becomes a blindingly fast car in an instant.

At this point, in Sport, BMW’s partnership with Hans Zimmer announces itself. The screen goes red and a faux engine note permeates the cabin. You’re always subconsciously waiting for it to change gear, which of course it never does, but it adds to the sense of theatre. Switching out of Sport mode is done by selecting Comfort or Eco Pro, again beside the drive selector, so in reality I don’t think you’d leave it in Sport for the entirety of a drive. I flicked through the modes regularly.

For longer drives, Eco Pro is the way to go. I drove to Leeds and back and that’s certainly the best option to eek out the range. BMW claims up to 318 miles on the WLTP cycle, but the car never even pretends to reach that. It arrived with 98% charge and an in-car stated range of 195 miles.

The BMW i4 M50 isn’t the most frugal of operators. I achieved 2.7 miles p/kWh over 624.6 miles of driving. Bear in mind c.400 miles of that was on the motorway, but even on a commute to work I only achieved 2.8. As a point of comparison, the Hyundai IONIQ 5 achieved 4.3 on the same drive.

The lifetime miles p/kWh of the model tested was 2.2 when it arrived, 2.3 by the time it left, over 5476.7 miles of driving. I guess those other hacks had, well, hacked it. The temptation to tap into that hilarious power delivery can be overbearing.

The trip to Leeds required two stops, one each way. The public charging infrastructure is improving rapidly and this was a lot easier than I anticipated. Range anxiety is, gradually, receding. You’ll need a home charging facility, naturally.

Practicality of the BMW i4 M50

First and foremost, this is a family saloon. The outer rear seats have Isofix, you get a 470ltr boot and there are plenty of storage spaces in the cabin. The only minor irritation is getting kids in and out. The rear doors are remarkably small; the gap is tiny. This means you have to get in the cabin to fit straps. A minor irritation in the grand scheme of things, but a point worth noting for those with child seats. There’s enough space in the rear for adults to be seated comfortably on a long journey.

Rapid charging can be carried out, up to 250kWh, although on our stops up to Leeds charging speeds of 90kWh meant stopping for 30mins each time. Grab a coffee, stretch your legs, this is what the marketing guys want you to believe the EV reality is! Thankfully, that was the case, assuming service stations on the outskirts of Chesterfield are your bag.

There’s a generous level of equipment as standard with the BMW i4 M50. M adaptive suspension and styling. Heated, electrically adjustable seats, ambient lighting, M Sport seat belts, wireless charging and wireless Android/Apple make it a comfortable environment. The rather fantastic Harmon/Kardon audio also comes as standard. Throw in the sweeping iDrive 8 infotainment system and the BMW i4 M50 is a rather nice place to be. It feels stylish, modern and well put together, with a good combo of touchscreen and physical functionality. The head-up display is another tick in the box.

Being a press car, the model tested was fitted with several options. The ones you’d need? The visibility pack brings the laser lights and the tech plus pack brings drive and park assist. I’d definitely be tempted to shell out for the frozen portimao blue metallic paint, too…

Electric powertrains are an inevitability. The BMW i4 M50 is a sneak peek into the future and, while it hasn’t rung everyone’s bell, it’s hugely impressive. It at least poses the pertinent question of what you want from a car. If you’re the type of M Sport enthusiast who regularly does track days, then the M3 and M4 are still available with ICE powertrains. There’s certainly an argument for revelling in them while they’re still around.

Battery technology, however, will only improve. They will get lighter and provide more range. The rest of the BMW i4 M50’s set up feels befitting of the M prefix, although the weight is the obvious sticking point. I’m unsure what the engineers in Munich can do about that at this moment in time, though.

They have at least made the BMW i4 M50 feel like a proper performance saloon. If you do decide to go EV over ICE for your next M Sport purchase, it won’t leave you feeling short changed. It does the mundane stuff superbly, then kicks you in the back with its raucous, untamed power delivery. It’s a car well capable of planting a smile across your face. I’d argue that’s M Sport enough.

It helps, too, that the BMW i4 M50 looks the part. A lot has been said about the controversial new front grille architecture deployed across the BMW range, but I think it rather suits the EV model, with no need for air intakes through the grille. It sits low, looks means and has the bite to back up the bark. Even if the bark is silent.

EV or ICE? BMW has an M Sport for that now. The rest is up to you.