EVs are an inevitability, but how good can they be? The Porsche Taycan 4S offers a glimpse into an electric driver’s future 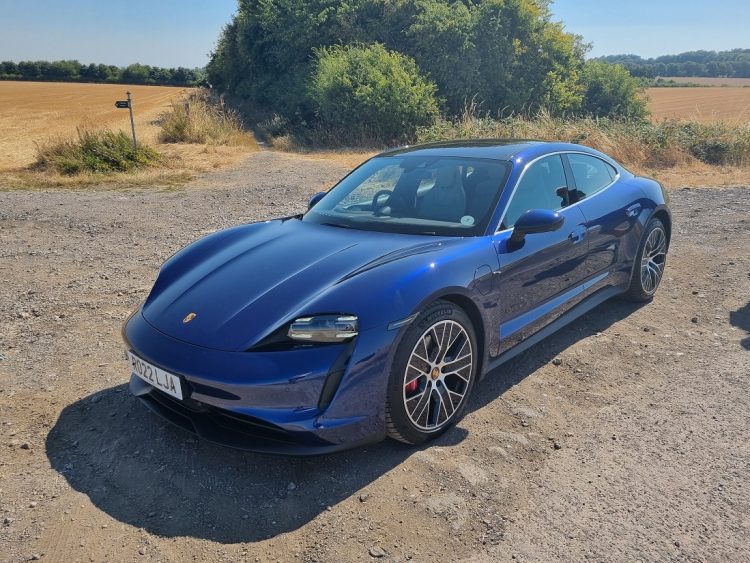 The internal combustion engine is, seemingly, on its last legs. The sale of new ones will be banned in the UK in 2030. Hybrid powertrains will follow them to the automotive graveyard in 2035. Which leaves batteries. One of the common complaints in the relatively short lifespan of the EV has been the lack of driver involvement. Sure, they can be brain spinningly fast in a straight line, but aside from that, meh. I had, therefore, been rather looking forward to driving the Porsche Taycan 4S. Is this, finally, an EV for the drivers?

The Porsche Taycan has been around for a short while now, first appearing back in 2019. It grabbed attention with the ludicrously fast Porshce Taycan Turbo S, which will do 0-60mph in well under three seconds. That’s all well and good, but what about the fabled driving dynamics Stuttgart has become so revered for?

The Porsche Taycan 4S, then, might well be the Taycan sweet spot. It’s plenty fast enough without being entirely loco. Turbo S and Turbo sit above it, the plainly named Taycan below it. The 4S brings about a dual motor powertrain, with the 93.4kWh battery (a £3906 option required to unlock the performance and added range over and above the standard 79.2kWh slab) producing 490hp most of the time, with 571hp available in launch mode. Pin the brake pedal with your left foot, pin the throttle with your right, wait for the beep to indicate that launch is active then release the brake. You’ll soon find yourself right where the horizon was but a moment ago. 0.60 takes 3.8secs. That’s fast enough, even if it’s made to sound pedestrian by the numbers the Porsche Taycan Turbo S spits out.

Aside from being alarmingly fast in a straight line, the Porsche badge needs to deliver a whole lot more besides. Happily, the Porsche Taycan 4S signposts a brighter future for driving in the electric age than many have predicted.

Whilst it’s heavy, weighing in at 2220Kg before anyone has got in it, Porsche have done a wonderful job with the elements that they can control. Batteries, put simply, are heavy. This will improve over time, obviously. The internal combustion engine has benefitted from more than 100 years of engineering. Serious EVs have been with us about a decade. Exponential improvement is to be expected.

Even so, in its current guise, you can’t fail to be impressed by the Porsche Taycan 4S. The steering is wonderfully balanced, the best of any EV I’ve driven so far. It’s not feedback central, but the weighting and accuracy makes positioning the car a joy. A serving of body roll helps you to understand what the car is doing via the chassis, rather than just pounding the road into submission like a similarly weighted super SUV. It feels more natural and intuitive for it.

This is an EV that encourages you to seek out your favourite roads. It’ll do the traffic light racing thing competently, too, and resisting the temptation to engage launch at every set of lights will be a challenge. Find a flowing B-road, however, and the Porsche Taycan 4S has so many more strings to its bow besides.

In more mundane scenarios, the adaptive air suspension has four settings to accompany the drive modes range, normal, sport and sport plus. Even leaving it in sport plus, the Porsche Taycan 4S is a comfortable motorway cruiser. Dial everything down and you can enjoy the peace and quiet offered by the well-appointed cabin.

Living with the Porsche Taycan 4S

Whilst Porsche have offered a quantum leap forward in the EV driving experience, there are some inherent compromises. Range anxiety is lessening the more we get to know EVs, but the Porsche Taycan 4S only offers 266 miles from a full charge, if driven like a Skoda rather than a Porsche. That said, the predicted range isn’t as far off being real-world accurate as some others.

Another drawback is the available space. For such a massive car – 4.96m long and 2.14m wide – it’s a wee bit cramped inside. As well as being heavy, batteries take up a lot of space. Up top it’s a wonderful environment to be in. The driver’s seat sits as low as you want and the curved display screen and integrated touchscreens are minimalist, modern and work wonderfully. The fixed panoramic roof is an option worth ticking; running front to back, it lets in loads of light, which is important in the more cramped rear. It lends a much-needed feeling of space.

I’m 6ft 2” and the outer rear seats are fine with the front seats in my preferred position. You wouldn’t want to spend too long back there, but then you’ll need to stop for a recharge before the DVT sets in. The middle seat was a non-starter for me, requiring the pressing of an ear to the panoramic roof in order to sit there.

The outer rear seats have ISOFIX points, so family use is very much on the cards. The 407ltr boot is complimented by an 84ltr storage compartment in the front, so getting everything in for a family trip is a realistic proposition. If rear space is a primary concern for you, the Porsche Taycan Cross Turismo solves a few Taycan practicality issues at a stroke.

Whilst there are still necessary compromises to be made in the EV space, the Porsche Taycan 4S points to a bright future. The presence of two gears hints at a manual future, too, another tick in the driver’s box, many will hope. Battery technology will only improve, with inevitable weight reductions and performance and range upticks.

But what about the here and now? The Taycan has become Porsche’s second biggest seller in the UK behind the Macan. Uptake has been surprisingly strong; I’m quite sure that not even Porsche themselves expected that. Yet the Porsche Taycan 4S justifies the billing. Its appeal is instantly obvious, from the sleek looks through to the luxurious cabin and startling turn of pace.

It’s expensive, yes, but perhaps the greatest compliment that you can pay it is that it doesn’t leave you feeling short changed. Other EVs and, particularly, hybrids have a propensity to do this, not so the Porsche Taycan 4S.

The £84,030 starting price quickly becomes £101,000 once you’ve run the rule over the options list, but it feels worth it. Others will undoubtedly wait a while before switching to EV, out of necessity or choice, but for those looking to go electric now, the Taycan has clearly hit the mark. It’s easy to see why.

Rather than ‘just’ being a point and go straight line monster, it also retains an inherent Porscheness. Not only does it have the looks and the badge, it also feels like a Porsche. Far from being just a ‘good EV’, the Porsche Taycan 4S is a good car, full stop. Get it out onto a decent stretch of road and it lives up to the badge which adorns its bonnet.