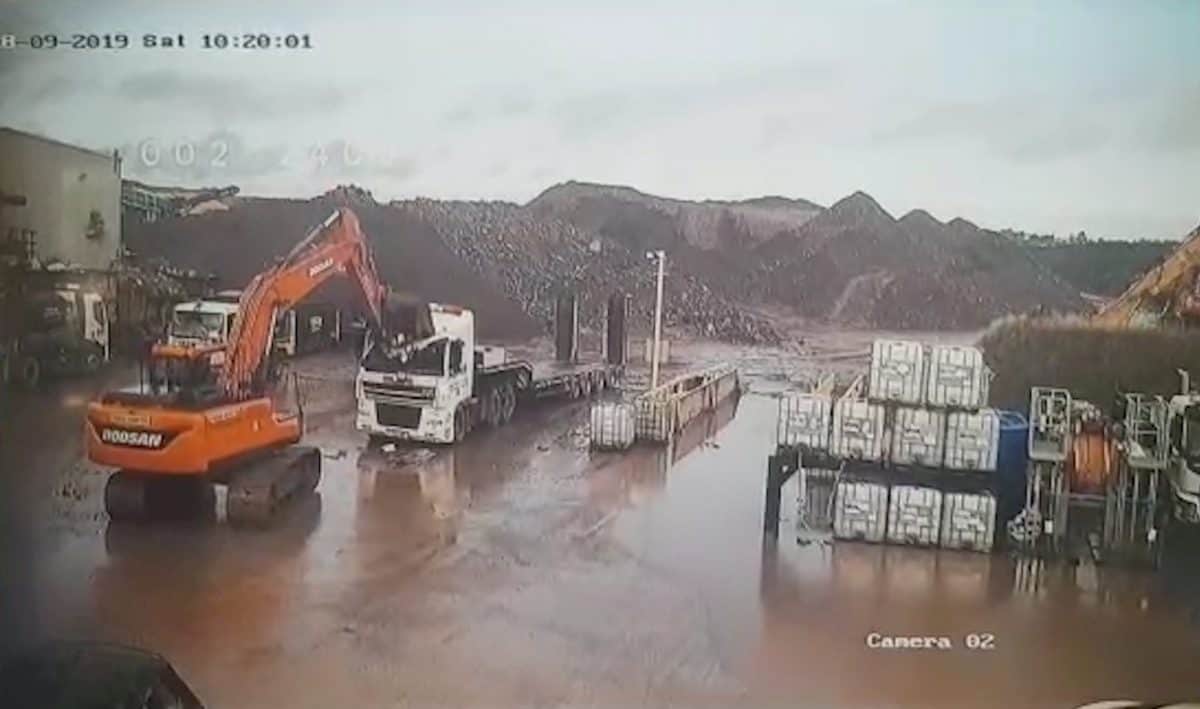 This is the shocking moment a disgruntled worker in a digger went on the rampage at a demolition site – smashing his boss’ £100,000 Range Rover and a truck.

In a series of CCTV and mobile phone footage, the driver can be seen crashing into a black top-of-the-range 4×4 before wheeling off to pummel a second vehicle on Saturday morning (28 Sept).

Staff at Thomas Crompton Demolition, Bradford, West Yorks., where then alerted to what was going on and rushed out to the vehicle to pull the man from the cab.

Owner Thomas Crompton today told how they feared the employee was heading towards their fleet of 60 vehicles – valued at £6m pounds.

Mr Crompton, 53, said: “There was a serious threat to life here.

“We have no doubt in our minds that he would have gone to do some serious damage if we had not have stopped him.

“We had staff in and around, working on-site, he had no regard for anybody else whatsoever.”

The business owner, who has been running his firm for 30 years, added: “This is a man who had been having problems for a while.

“He lost his mother a bit back and we have been helping him with time off and funeral costs.

“But on Saturday morning, when he came by the depot at 7am, I told him there was no driving work on today and he left.”

Mr Crompton and a couple of other staff were in the office cabin at the depot at around 10.20am when they heard an almighty crash.

Thomas said: “I heard a massive bang which scared the life out of me, I looked out of the window to see my car, a Range Rover Autobiography, bouncing into the air.

“My sister, Margaret Crompton, ran straight out and demanded he stop, but he did not listen.

“I managed to get into the vehicle to get what we call the deadman’s handle – the emergency stop on a construction vehicle – to stop him.

“He was fighting me to stop me getting at it, because he knew what I intended to do, he had like a super strength.

“He was adamant he wanted to keep driving that vehicle.

“He stunk of alcohol, his eyes were glazed over and he was slurring his words, he was like a man possessed. He was highly intoxicated.

“We had to pull him from the vehicle and secure him until the police arrived to arrest him.

“It is such a shame it has ended like this.

“He is an experienced digger driver, he has worked for us on a freelance basis for a couple of years and we have been nothing but kind to him.

“I am really disappointed.

“We are now in shock thinking what damage he could have done if we had not stopped him. This could have been a murder investigation.

“Family quite often to come to visit us here at the site on a weekend – because I work all hours god sends – and sometimes, if my 18-month-old nephew has fallen asleep in the car, we will leave him asleep in there.

“If he was in there he would not be alive.

“There were also other guys working on the vehicles, cleaning and making repairs. This could have been far more serious than it has been. It is scary to think.

“I do not know what caused him to do this.

“His wife has been to see us, to apologise, but I know that he has been told by the police that he must stay away from us.”

On the footage employees, including one woman – Margaret – run over to the digger, with two getting into the cab to pull him out.

The driver falls out of the cab onto his back, when somebody tells him: “You are in trouble.”

The videos are going viral on Facebook with the videos being shared thousands of times.

West Yorkshire Police have confirmed they are aware of the video and are looking into what happened.