A life-sized Ford Mustang made of snow was given a parking ticket in Nebraska, USA. 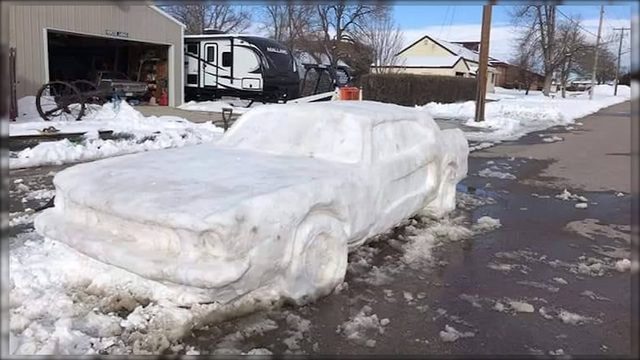 This life-sized Ford Mustang was given a parking ticket – despite being made entirely of SNOW.

The sculpture was built by a family in icy Nebraska, USA, and then spotted on the street by Nebraska State Patrol Sergeant Mick Downing.

“I am friends with the people who made the car and I saw they had posted a photo of it on social media,” said Sergeant Downing, 48.

“I thought I’d pull a prank on them by putting an ‘intent to tow notice’ on it, asking the driver to remove the vehicle in 24 hours or it would get towed.

“Not that I was going to tow a huge chunk of ice, that thing must weigh a ton, it’s a life-sized replica of a Ford Mustang it was packed solid!

“It’s quite a work of art, we all thought it was really neat,” he added.

“They had a great time doing it,” said Jason’s wife Jess, 41, who works at a car dealership in Chadron, Nebraska.

“They used a Bobcat to assist with piling snow from around the area and they used shovels and concrete tools to mold and shape it.”