The Genesis GV80 is an attempt to muscle in on the luxury SUV action. Can it hold its own in a sceptical UK market? 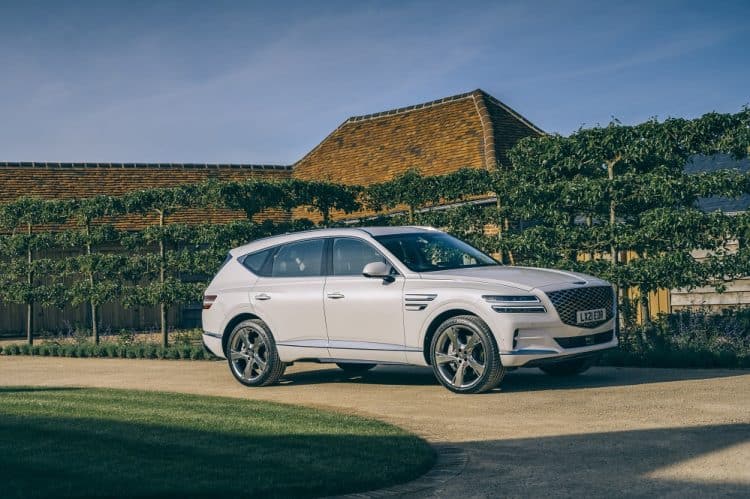 Brand awareness and brand loyalty are things that we tend not to ponder too often. We like what we like, we reason, and habitually buy similar stuff. I, for example, am prone to buying a pair of Adidas Gazelles and have been for more than 20 years. People like their iPhones and don’t deviate. You’ll find staunch Guinness drinkers and those who’ll refuse to get their coffee anywhere other than their favourite chain. In the UK, this also extends to our cars. Cars are, perhaps unintentionally, social status symbols. In this world, German marques reign supreme. “Ooh, someone’s doing well, look at that Audi Q7.” Can a new pretender compete against that? Well, that’s exactly what the Genesis GV80 is doing.

Now, is the Genesis GV80 merely a Bentley Bentayga you ordered off Wish? Or is it where the smart money will go when shopping for your next family SUV? I read reports from both ends of that spectrum before getting my hands on one for week. A step into the unknown, therefore, was at least going to be an intriguing one.

The comparisons also extend to first impressions inside the Genesis GV80. Knurled knobs, high quality cream leather seats, intelligent functionality. On first viewing, this is a hell of an introduction.

The commanding driving position also gives the Genesis GV80 a stately feel. It has presence in spades, which I suspect most people want from an SUV. It’s 4.95m long and 2m wide with a weight of 2.15-tons. Throw in the 22” wheels on the model tested and you’ve got yourself a car that’s prepared to announce itself.

As you’d expect, then, this renders it obsolete as a B-road basher, although there is more traction to work with that you might reasonably expect. Apparently, some of the development work was undertaken at the Nürburgring for some reason. The 2.5-litre turbo-charged four-cylinder engine, which produces 300bhp and 422Nm of torque sends the Genesis GV80 from 0-60 in 7.7secs. It doesn’t scream ‘trackday’.

The steering, however, is entirely in tune with what you’re expecting. Perfectly accurate, but with that creamy sensation. Feedback? None whatsoever, but you get enough sensation of what’s going on as the mass is transferred through corners or under braking.

In town and on potholed roads the ride can be somewhat crashy. You experience the sharp thud of potholes a bit more vividly than you may wish to, although the 22” wheels and lower profile tyres probably don’t help. It’s a shame, because otherwise the Gensis GV80 does what all good luxury SUVs should do and suspends all sense of motion.

Out on the motorway, it’s really in its element. A drive to Leeds and back, which took in all conditions from 18-degrees in the sunshine on the way there to an unrelenting storm on the way back, revealed a composed car in all elements. It pounds the miles into submission, although it can be a little thirsty. 500 miles of driving yielded a return of 26.4mpg. That 2.5ltr turbo charged four-cylinder engine is not the most frugal.

Living with the Genesis GV80

You know how sometimes you have to go to Leeds to drop a fridge freezer at your cousin’s? You know how that sometimes happens, right? Well, the Genesis GV80 is perfect for the job. A 1.77m fridge freezer slots seamlessly in with the rear seats folded down. I’m forever the pessimist and did not fancy its chances one bit. But in it went without so much as a swear word being muttered.

So, practicality is plentiful in the Genesis GV80. Some big cars, particularly big modern cars, pull off the unwanted trick of being actually massive, but then having a surprising lack of space inside. Not so here.

Even with the rear seats up, the boot is huge. There’s plenty of room for a couple of bikes, for example. You can opt for a seven-seat arrangement, too, which I have no doubt would work wonderfully.

The Genesis GV80 is also well equipped as standard. The infotainment screen is crystal clear, operated by touch or a rotary dial in the centre console. There are all manner of safety features, too.

The model tested came equipped with the innovation pack (£3,900) which brings reverse parking collision assist, LED headlights, head up display, surround view monitor and blind spot assist. It’s probably worth the money. So too the comfort seat pack (£1,250), because who doesn’t like a massage on heated and ventilated leather seats? They really are very comfortable.

Another option to consider is the Lexicon audio at £1,020. Since this is a car for covering long journeys in, it’s worth having that as it’s a decent system.

Usability of the Genesis GV80

One annoyance is all the safety beeping it does. It beeps A LOT. The speed camera warning one is particularly irritating as it starts 1.1miles from the camera and is incessant during average speed zones. Now, this sounds great on paper – you’re speeding, slow down, there’s a camera. Except it’s not bulletproof. It failed to recognise the end of one 50mph average speed zone so beeped non-stop once I had entered the M25 and its 70mph zone. It took 17 miles to work out how to turn this off.

Now, you’d think it’d be in the speed warning section. It’s not. 9% of the journey to Leeds was spent finding the solution, which was in a sub-menu within the sounds section. By this point I was ready to pull over and set the car on fire. Thankfully that anger soon dissipated and the beeping never returned. This is the point where I tell you I got a speeding ticket… I didn’t!

The lane keep assist is also fussy. It fights the steering wheel and the car wants to hang just a little further left than you’d like. This can be easily turned off, but using the adaptive cruise control through average speed zones in roadworks would be useful, but the lanes are simply too tight for a car of this size along the M1 to make it comfortable to use.

On the way back, through the storm previously mentioned, this functionality really came into its own. It did a great job of keeping track of the white lines and keeping the car in a normally sized lane through a downpour. You know those moments where you hold your breath and get through the wall of spray thrown up by a lorry? The Genesis GV80 cruises through that scenario.

The reactions of fellow road users are always indicative. “What is that?” was a question that popped up a lot. We’re back to brand awareness and loyalty. The Genesis GV80 is clearly doing something right, because big SUVs don’t usually draw many admiring glances or questions, unless they’ve got a Lamborghini badge on them or something.

Genesis, the luxury offshoot of Hyundai, has the muscle of the group behind it and Hyundai itself has been in fine form of late, not least with the Hyundai IONIQ 5 that we recently reviewed. But it is somewhat curious to launch with a luxury SUV that has either a petrol or diesel engine – no hybrid or electric. Those options are coming, not least with the Electrified G80 and GV60. Is the GV80, then, a mere toe in the water?

It could well be. Electrification is providing manufacturers a chance to reposition themselves and Hyundai has taken the opportunity well. The Kia EV6, also hailing from within the same group, is another earning rave reviews.

In the UK, however, we’re sceptical of new car brands. Anyone remember Infiniti, Nissan’s go at this same project? Even Jaguar is struggling. Is Lexus fully established in the UK market? We seem to have an insatiable appetite for German crossovers and SUVs at this market point.

They offer better ride quality and residuals, but for those unperturbed by such matters, the Genesis GV80 is undoubtedly a compelling proposition and is worth a look. To hear the questions of slightly bemused onlookers, it’s also nice to drive something a bit different. No one will be interested in your German SUV. Is that enough? Only time will tell. Electrification will likely hold the answer.