Designed in a more relaxed fashion that some, the Lexus RX combines comfort, style and practicality for life in the slow lane 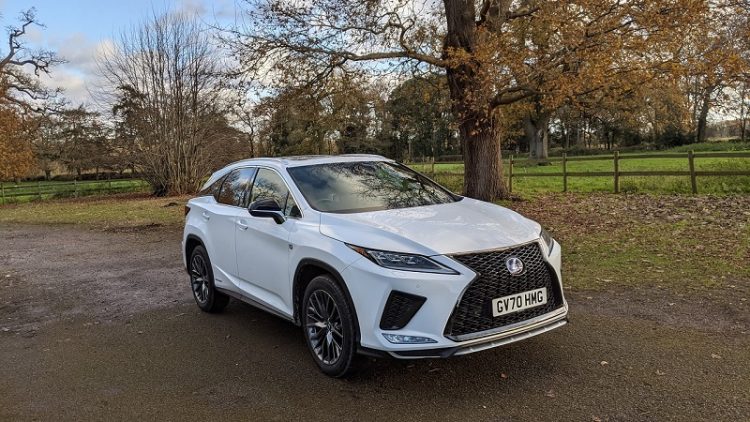 A couple of turbo chargers here. A supercharger there. Throw in an active anti-roll bar and a massive set of wheels and most modern SUVs are more supercar than utility vehicle. On top of that, the old notion of the 4X4, the tough and rugged off roader, has also collapsed in on itself. Sure, these cars look like they could tackle Snowden, but in truth they’d struggle getting out of a carpark at Glastonbury. It’s all become a bit confused. That’s where the Lexus RX comes in.

The old format of the 4X4 is dead. It gradually morphed into the modern SUV that you see on every drive these days. All that remains is the bulk and heft, offering perceived safety and status. This transformation has seen the rise of the performance SUV. These are something of a guilty pleasure; sending today’s 2.5-ton wagon along at a faster lick than yesterday’s supercars is absurd. A tank that’s faster than a Ferrari 360? You better believe it.

The Lexus RX, however, steps away from this arms race and doesn’t try to be something that it’s not. And you know what? It’s appealing for it.

Evolution of the SUV

When I was growing up (the 90s), 4X4s were driven by farmers or odd folk who did adventure weekends and couldn’t afford a second car. Fair enough, if you need one car to do everything, they weren’t necessarily a bad shout. The battle axe Defender was used for everything. The sub-culture of the Range Rover had also started to emerge in the mid-90s. The Rettendon Murders, in which three gangsters were killed in Essex, happened in a Range Rover. They had street cred already. They had presence.

People were drawn to this presence. But then people also wanted better interiors and a more forgiving ride. Porsche cottoned onto this and in 2003 launched the Cayenne. The floodgates were now open. Size, speed and luxury; people couldn’t get enough.

The pretence of off-road capability lingered, but the Chelsea Tractor had been born in earnest. These cars would tackle nothing trickier than a speed bump in a Waitrose carpark.

The off-road gubbins has been buried now. Marketing of these cars doesn’t show them tackling tough terrain. What has superseded off road capability is performance. The problem with this is that such massive vehicles are inherently dynamically compromised.

Where does the Lexus RX fit into all this?

The Lexus RX goes its own way. Lexus has sat back and watched the arms race unfold and decided that it wants absolutely nothing to do with it. You want a big comfy car that’s, well, big and comfy? Here’s the Lexus RX.

It’s a very calm, polite and amendable car. If some other manufacturers have produced SUVs that are more heavy metal in nature, the Lexus RX is the automotive equivalent of a coffee shop jazz album. It will fit in anywhere you take it and offend no one. Sure, it won’t raise any pulses, but that’s really not the point. The Lexus RX embraces what a luxury family SUV should be.

Equipped with a 3.5-litre V6 that produces 308bhp, the Lexus RX is also fitted with a battery. This hybrid powertrain delivers its power smoothly and serenely. 0-60 takes 7.7secs and the delivery to get there is wonderfully consistent. There’s a slight burble from the V6, but nothing overly obtrusive to the relaxed state of the cabin.

At motorway speeds the Lexus RX is whisper quiet. The ride quality is exceptional and it just glides over the surface. This translates to urban settings, too. With smaller throttle inputs it will run on EV power alone, keeping things silent. When the combustion engine is called into life the transition is seamless. Only when you floor it do you really notice it happening.

Over speed bumps and potholes, the ride is as you’d expect. That’s to say, very good. The emphasis is on simply delivering a serene driving experience. If you owned one, it would blend in around your life. School runs, commutes, long motorway hikes; this is a perfect companion.

Okay, okay, I did put the Lexus RX through its paces down a couple of my favourite B-roads in the name of research. There is, after all, a sport and a sport+ setting. Switching to these modes brings a rev counter into the centre of the binnacle and things go a bit red. There’s no discernible difference in power delivery, except to say that EV driving is off the menu.

Leaning it into bends uncovers a fair bit of body roll, but nothing unpredictable or unmanageable. The steering remains light, which makes it lovely the 99.9% of the time you’re not driving like a hooligan, but accurate. There’s no real sense of connection with the road and it’s a reluctant participant in such activities. The ‘sport’ in F Sport writes cheques the car can’t cash, but judging the Lexus RX on its dynamic prowess is like judging a dolphin on its ability to ride a bike.

My only note of complaint is driving the Lexus RX at night. I couldn’t for the life of me get the auto full beam to turn off. I even read the manual, so you know I took it seriously. Even with the lights switched away from auto, the full beam would appear when the car deemed it necessary.

This is fine in principle, but the high beam assist isn’t amazing at detecting cars not that far away, or oncoming cars on the other side of motorways and dual carriages. In theory, the lights work well, throwing full beam onto one side of the road. It also did this in street-lit areas, blinding any pedestrians unfortunate enough to be out for a stroll. It was over eager to turn on and impossible to turn off.

Living with a Lexus RX

The crux of the matter in buying a family SUV is practicality. The Lexus RX delivers in spades. The cabin is really well appointed and features a touchscreen, moving away from the oft infuriating mouse pad that Lexus fits its cars with. It’s still there, but you can ignore it now.

The seats are supremely comfortable and it’s fitted with a decent stereo. The model tested, the F Sport, doesn’t feature the Mark Levinson upgrade that adorns the Takumi package. We reviewed the Lexus LC500 earlier in the year and the Mark Levinson audio system remains the best I’ve heard in a car. If you love your music, it’s an option well worth considering.

In the back, space is copious. The rear bench can be rolled forward and reclined and there’s all the usual Isofix and charging points. Headroom is sufficient for the tallest person you know (probably) and leg room, no issues.

The hybrid charging is good, too. It’s good because you don’t need to plug the car into anything – it’s self-charging! This is good because getting the cables out and charging a car is a faff. Lexus have thought of that and decided not to inconvenience you, which is good of them.

On a user level, everything in the car is nice to the touch. The volume knob is a wonderful thing to turn in your fingers, the movement is delicious. Even the hazard warning lights emit a relaxing click as they do their thing. The climate control takes care of itself without bothering you, including the heated and air conditioned seats. It knows if your arse is too cold or too hot and does something about it. It works remarkably well, too, because you simply don’t notice it. You’re just comfortable.

Boot space, storage space, cupholders, leather upholstery, a sun roof… it’s all here. The Lexus RX is a remarkably accessible car. My wife was driving it as well and I thought she might struggle with the sheer size of it. Everything’s here to assist you, though, with parking cameras and sensors and wonderfully relaxed steering.

You’ve probably gathered by now that I rather liked the Lexus RX. It’s not trying to be something that it’s not. It doesn’t pretend to be a rugged off roader nor a supercar. Here, simply, is a luxury car for the family that just blends in.

It’s comfortable and serene, good looking and elegant, practical and spacious. If you want thrills and spills, you’ll need to look elsewhere, but the Lexus RX doesn’t try to hoodwink you into thinking that it’ll drive like a hot hatch. Lexus has banked on a cohort of people not being interested in climbing mountains and drag racing Ferraris. They want a bit of luxury and refinement. The Lexus RX delivers.

Most importantly, perhaps, the Lexus RX just feels comfortable in its own skin. It is what it is. For 99.9% of what people use a family SUV for, this car has it covered.