“Ugly,” “disgraceful,” “vile,” “a day of shame,” “scenes nobody wants to see.” The media bandwagon clicked into its predictable gear following West Ham’s 3-0 defeat to Swansea on Saturday. It is a game which will not live long in the memory for the football, but rather the actions of a handful of West Ham supporters in […] 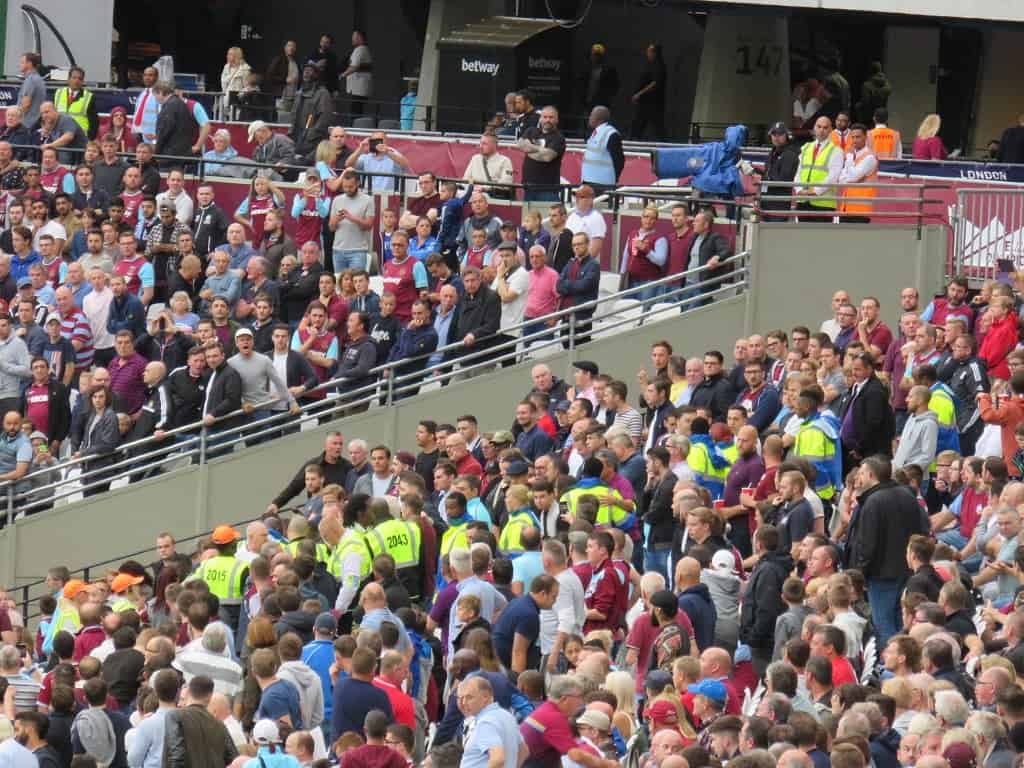 “Ugly,” “disgraceful,” “vile,” “a day of shame,” “scenes nobody wants to see.” The media bandwagon clicked into its predictable gear following West Ham’s 3-0 defeat to Swansea on Saturday. It is a game which will not live long in the memory for the football, but rather the actions of a handful of West Ham supporters in storming onto the pitch during the game, fighting amongst each other in the stands and vociferously protesting the club’s owners.

Whilst the events were undoubtedly unsavoury, with families left feeling unsafe during an outing to the football, what other recourse do West Ham fans have against what they perceive to be a poisonous ownership?

This is the sharp edge of football’s transition from a community, supporter-led game, to big business. The people who turn up in their tens of thousands to watch Premier League football are now the least important people in the whole charade.

Football clubs are now the domain of wealthy owners and nowhere is this more keenly felt than in the Premier League, with foreign owners, petro-billions and a global television audience. These clubs could quite comfortably live without the supporters who contribute the most, financially and timewise, to the cause.

West Ham are a fine case in point, having lurched from one disastrous ownership to the next, except that Davids Gold and Sullivan, along with Karen Brady, have really rocked the ship. The old Boleyn Ground, hidden in a rabbit warren of grimy back streets deep in east London, was the heart and soul of this backs-to-the-wall club. It was an intimidating ground to visit and West Ham wouldn’t have had it any other way. In moving to the glitz and glamour of the London Stadium to occupy the white elephant left behind by Seb Coe’s Olympic movement, was to leave behind the club’s identity. West Ham’s soul was sold for the profit of its owners to the detriment of the supporters.

The thing here, of course, is that the owners haven’t done anything wrong. They purchased a football club like they could have purchased any other business and are seeking to profit from their venture. They profit from their loyal customers (the fans) and from being part of the Premier League jamboree.

So what can discontented supporters do? West Ham are hardly in a unique position. Newcastle United supporters are railing against their own ineffable owner, Mike Ashley. Charlton Athletic have been dragged through the mud by Roland Duchatalet, a man who has owned several clubs around the world. Blackpool have been at the mercy of the lamentable Oyston family. Leyton Orient were forced to the brink of extinction by Francesco Bacchetti. Blackburn Rovers have been humiliated by the Indian chicken farmers who decided to dabble in the world of Premier League riches.

Running onto the pitch and trying to storm the directors’ box was the recourse of the desperate at the London Stadium on Saturday. A few chants and banners look good on social media, but are easily brushed under the carpet by owners who are coining it in at the expense of those sitting beneath them.

The hurried exit of David Sullivan from the stadium, clearly on security advice, will have rocked him far harder than a sharply worded banner. Profit is one thing, the perceived safety of you and your family is quite another.

“Don’t go,” is a suggestion that has been handed out as a way for supporters to hit their owners where it hurts. Except, this really doesn’t hit them where it hurts. For the 2016/17 season, West Ham received £116,626,014 from the Premier League alone. The club received £39,090,596 from overseas television rights, as part of this. During the same season, according to Deloitte, West Ham pulled in £28.6m in match day revenues. Whilst ‘not going’ would upset the club’s finances somewhat, it could survive without it. This is, according to Deloitte, the 17th richest club in the world.

The don’t go tactic hasn’t worked elsewhere, either. Blackpool fans largely walked out on their club, yet the Oystons clung stubbornly to their power. Blackburn’s double relegation naturally saw attendances fall away, yet the owners remain. The same is happening at Sunderland.

These aren’t shops, either. If, for example, your favourite supermarket indulged in some murky practices with which you disagreed, you could simply shop elsewhere. West Ham supporters can’t simply chop in their claret and blue and take up supporting Millwall, that’s not how supporting a football club works.

Whilst the scenes at the London Stadium were justifiably lambasted by all and sundry in the aftermath, it is important to take a moment and try and understand the situation. These were people who were quite willing to be arrested in order to make their point. They were desperate and there is, simply, no other way for supporters to effectively voice their discontent.

This is the house that the Premier League built, where profit reigns supreme and greed has become good. This is football’s transition from community to business; from enjoyment to profit. Of course, nothing will be done about it. West Ham’s supporters may be effective in forcing their loathed owners out of the club, but to whom would the club be sold? This situation will keep on happening at other clubs, too, but so long as the money is rolling in, and actions such as this don’t do too much damage to the Premier League’s brand, then nothing will change.