It comes after Spanish authorities praised Rangers fans for their impeccable behaviour as some 100,00 descended on Seville for the Europa League final. 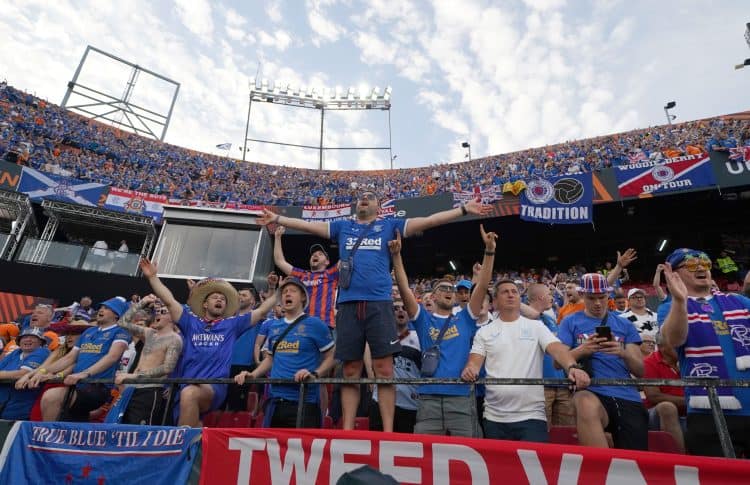 Eintracht Frankfurt have taken out a full-page advert in the Daily Record today wishing Rangers luck in the Scottish Cup final.

The Glaswegian side faltered at their final Europa League hurdle with a cruel 5-4 penalty shootout defeat to their German opponents in Seville.

Joe Aribo had the Gers fans in raptures in the searing heat of the Ramon Sanchez-Pizjuan stadium when he opened the scoring in the 57th minute.

However, Colombia forward Rafael Borre levelled in the 68th minute to give the game 30 added minutes where Frankfurt goalkeeper Kevin Trapp made a fantastic last-gasp save from Ryan Kent.

Then came penalties and despair for the Light Blues and substitute Aaron Ramsey in particular who had his spot-kick saved.

Rangers vice-chairman John Bennett has expressed his pride in the tens of thousands of supporters who followed their team to Seville and “wowed” the Spanish police and authorities.

Police confirmed on Thursday that no Rangers supporters were arrested in Seville after estimating that 100,000 were making their way to the Andalusian capital.

Six Germans were arrested ahead of Wednesday’s Europa League final, most of them for being allegedly part of a large gang of Eintracht Frankfurt fans who went looking for clashes with Rangers supporters.

Some footage emerged of Frankfurt fans attacking Gers fans outside a bar with chairs and bottles thrown but the build-up, the final itself and the aftermath were overwhelmingly peaceful with far more reports of rival supporters mingling.

Rangers now gear up to take on Hearts in the Scottish Cup final at Hampden Park.

Ahead of the game Eintracht Frankfurt took out an advert on the back of the Daily Record today to say commiserations to Rangers and wish them well in the final.

The move has been widely praised, with one person calling it a “touch of class”.