Witnesses have reportedly been unwilling to give statements or go to court, which makes legal action unlikely. 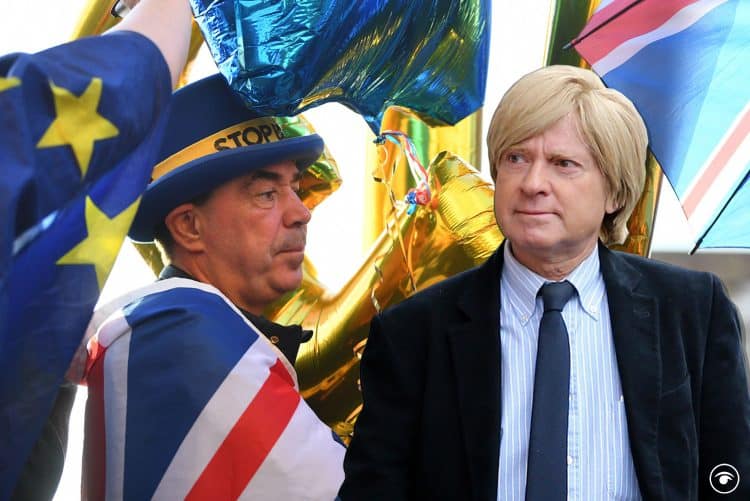 Michael Fabricant’s bid to silence ‘Stop Brexit Man’ Steve Bray has stumbled at the first hurdle, according to Guido reports.

The Conservative MP has been at war with the vocal protester, writing to Parliament’s security department in a bid to get him barred from Westminster.

But the Met Police have struggled to find witnesses who are willing to go to court and actually accuse Bray of harassment, which they deem more hassle than simply putting up with his feisty opposition.

Writing to Fabricant on behalf of the House of Commons Commission, Sir Charles Walker said:

“Some witnesses do not want to give statements or are unwilling to go to court; without such testimony it makes any legal action very unlikely.

“In addition, some behaviour does not constitute a criminal offence when viewed in isolation; without witness statements, building a persuasive case around persistent behaviour is very difficult.”

Throw him in the Tower

Earlier this month a fellow Tory MP, Marco Longhi, told the Commons that Mr Bray should be “locked up in the Tower with a loudspeaker playing Land Of Hope And Glory on repeat at maximum volume” because of the disruption he causes.

The MP also claimed that staff in his Westminster office could not hear “distressed constituents on the phone” because of the loud music Mr Bray plays.

Mr Bray hit back, telling the PA news agency: “You know what these Tories are like. They don’t want protests which is why they are stripping away our rights.

“And Marco Longhi and also his best buddy Lee Anderson, they are not happy to see me because they normally try and wind me up but I end up turning it on them.

“Here is the thing about those two – they are going to lose their seats in the next election, so they are just griping for any little bit of press coverage they can get. The less they get the better, to be honest, because they are so insignificant.”

Each Wednesday, the top hat-wearing demonstrator stands on a traffic island outside the Houses of Parliament playing loud music in a protest which coincides with Prime Minister’s Questions.

Before he began using a loudspeaker, Mr Bray was known as the Stop Brexit Man because he used a megaphone to shout “Stop Brexit”.